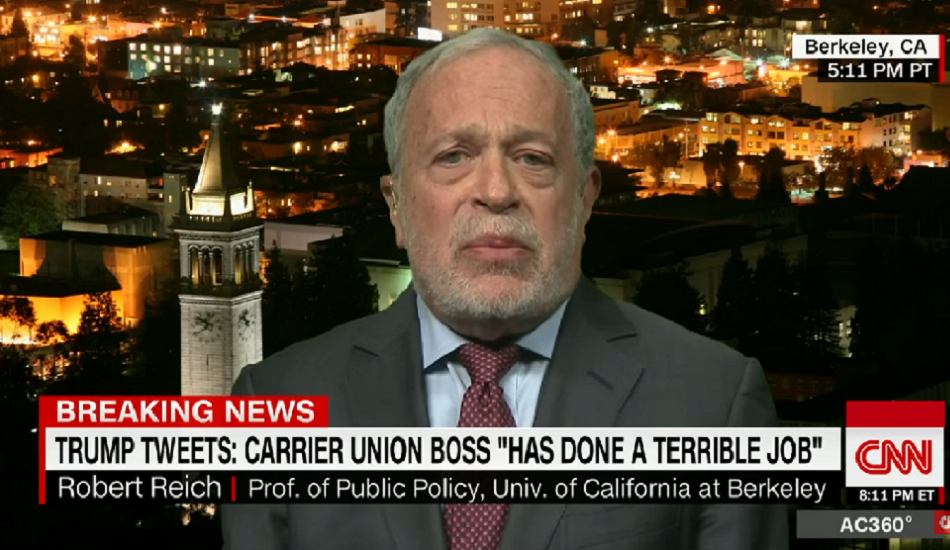 After President-elect Donald Trump used Twitter to go after a local union boss in Indiana, former Secretary of Labor Robert Reich addressed Trump directly, saying "If you have this kind of thin-skinned, vindictiveness, attitude toward anybody who criticizes you, we are in very deep trouble, and sir, so are you."

Robert Reich, Professor of Public Policy at the University of California, Berkeley, and former Secretary of Labor under Bill Clinton, took to the airwaves to lambaste President-elect Donald Trump for misusing his social media platform to go after people who criticize him.

Trump used two tweets to crudely insult Chuck Jones, a union boss in Indiana, after he criticized Trump for saying he was saving 1,100 jobs at the HVAC manufacturer Carrier. The actual figure is closer to 800, and Trump arrived at the 1,100 number by counting jobs that were never slated to move to Mexico. Jones' union is still losing around 550 jobs, according to the Washington Post.

Chuck Jones, who is President of United Steelworkers 1999, has done a terrible job representing workers. No wonder companies flee country!

If United Steelworkers 1999 was any good, they would have kept those jobs in Indiana. Spend more time working-less time talking. Reduce dues

These tweets and the harassment that followed prompted Reich to speak directly to the president-elect about how he uses (and abuses) his position of power.

COOPER: Mr Secretary, what do you make of this latest sort of example of Donald Trump responding to something that he’s read or seen on television?

REICH: Well, Donald Trump is doing this quite a lot, Anderson. He’s using Twitter. He has these tweets going out against people who criticize him. Not only Chuck - the person you just talked to, Chuck Jones, but also Alec Baldwin when he satirized Mr. Trump on Saturday Night Live. Also individual journalists who criticize Donald Trump.

Let me just say, because Donald Trump is probably watching right now, let me just say, with all due respect, Mr. Trump, you are President-elect of the United States. You are looking and acting as if you are mean, and petty, and thin-skinned and vindictive. Stop this. This is not a fireside chat. This is not what FDR did. That’s lifting people up. This is actually penalizing people for speaking their minds.

What you did with Boeing the other day: minutes after the CEO of Boeing was quoted as saying that you, Mr. Trump, you, President-elect Trump, were wrong on international trade. What did you do? You tweeted that Boeing should have an order canceled. You called it a four billion dollar order. And that meant Boeing - Boeing’s own prices, its share prices, plummeted. So in other words what you, Mr Trump, what you would like is for no one, not a CEO, nobody on television, no journalist, nobody to criticize you. You take offense at that. Well, you are going to be president very shortly. You are going to have at your command not just Twitter but also the CIA, the IRS, the FBI. If you have this kind of thin-skinned, vindictiveness, attitude toward anybody who criticizes you, we are in very deep trouble, and sir, so are you.

Official unions and their leaders also took to Twitter to respond:

Chuck Jones was trying to save workers jobs while @realDonaldTrump was buying Chinese steel for his bldgs https://t.co/w9vtbikULP

Chuck Jones is a man of integrity who ALWAYS puts the interest of workers first. To say otherwise is not only false, it's infuriating.

Chuck Jones is a man of passion, conviction and integrity who would do anything for his union brothers and sisters.  President Gerard is exactly right – Chuck is a hero.  An attack on him is an attack on all working people.

Chuck is right to call out the president-elect for inflating the number of jobs that will be saved at Carrier. He understands better than anyone that these are more than numbers—they are people with families to support and bills to pay.

Instead of attacking those who have been working hard to save jobs, the president-elect needs to engage with local union leaders at Carrier and at his hotel in Las Vegas. Trump International Hotel in Las Vegas is breaking the law by not bargaining with its newly unionized employees.  Mr. Trump will soon occupy the White House. His words and actions need to befit that office.

Trump has a track record of anti-union business practices, including using imported Chinese steel on his hotel in Las Vegas and commenting frequently that “wages are too high” when the federal minimum wage has failed to keep up with inflation.

Trump has already demonstrated what his retribution against companies looks like in a fight with Boeing. Now, it seems, he has moved into the practice of attacking private citizens. He has only been president-elect for one month.

Reich is correct to call Trump's behavior "petty" and "thin-skinned." Going after a private citizen for exercising his right to criticize the government is the very definition of vindictive. If Trump carries on with this behavior in office — and there is no real reason to believe he will not — Reich is correct: We are all in very deep trouble.