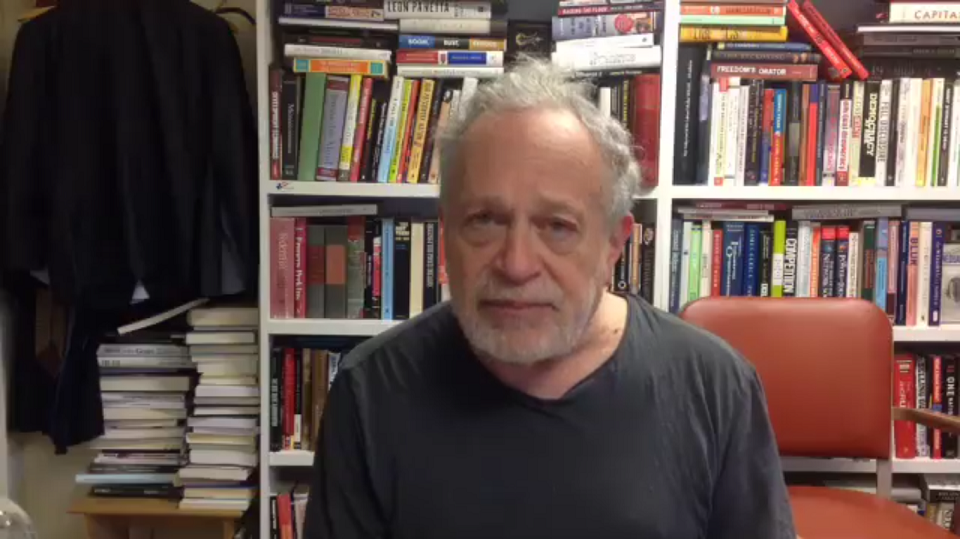 Robert Reich
Get The American Independent in your inbox

Former Secretary of Labor Robert Reich dismantles the propaganda campaign being waged by Donald Trump and the Republicans to hide the damage their attempt to repeal health care reform will do, pointing out that they are using the same thuggish tactics of past despots and tyrants.

In his most recent dispatch, Reich deconstructs the Republican effort to discredit the nonpartisan Congressional Budget Office (CBO), which is set to analyze the GOP’s attempt to dismantle Obamacare under the guise of the "American Health Care Act." Reich warns that this effort falls into a pattern from Trump of discrediting information he dislikes, much like "despots and tyrants" in history have done.

Based on previous analysis of a similar bill, the CBO is expected to reveal that 10-20 million Americans could lose insurance under the Republican plan.

REICH: The Congressional Budget Office is under attack from Republicans and from the Trump White House. The CBO is the place where analysis is done for Congress about legislation that is pending. It is non-partisan analysis. It is analysis based on objective facts and logic and data.

Now what the Republicans and the Trump White House are doing is basically saying to the public, 'Don’t wait for the CBO, the Congressional Budget Office’s, analysis of our new health replacement for Obamacare. Just don’t pay attention to it. In fact, it can’t be trusted.'

This is what Sean Spicer said, he said, 'If you’re looking at the CBO for accuracy, you’re looking in the wrong place.' House Majority Whip Steve Scalise called the Congressional Budget Office 'unelected bureaucrats in Washington.'

Now, here’s the interesting thing about this, because the director of the Congressional Budget Office right now, a fellow named Keith Hall, is a Republican economist, he’s a former George W. Bush administration official, and he was chosen for the position of Director of the Congressional Budget Office by the Republican Congress in 2015. In other words, he is not in any way, shape, or form a Democrat or a leftie or anybody you would expect Republicans would not trust, or the Trump administration and the White House would call into question.

And yet what’s happened is the Republicans and the Trump administration don’t want the public to believe what the CBO is about to come out with. Why? Because they don’t trust, in fact they believe that the CBO is going to find that the new Republican substitute, so-called, for Obamacare provides very little coverage and also will cost average Americans much too much and will not do very much good for the budget deficit because it reduces the taxes of very wealthy people.

Reich later connected the similar campaign from Trump to discredit media outlets who reported damaging stories about him, by calling them "fake news," and attacking judges who ruled against him as illegitimate.

As Reich explained, this has been Trump’s go-to pattern of behavior when confronted by objective facts and information harmful to his agenda and ego. House Speaker Paul Ryan (R-WI) recently echoed this message in a radio interview, dismissing concerns about lost coverage to a "beauty contest."

This pattern of behavior from Trump and Republicans is a warning sign, Reich advised, noting that in this technique, "You discredit the parts you don’t like, you ignore the parts you don’t like, you elevate the parts that you do like, that agrees with your preconceived ideology." This, according to Reich, "is the kind of technique and tactic that despots and tyrants have used historically."

REICH:  The bending of history, the changing of history, to suit the Trump administration’s views of public policy is just like what Trump and the rest of his administration have been doing with regard to neutral facts. The press, the Congressional Budget Office, the intelligence agencies, science, you bend it all. You discredit the parts you don’t like, you ignore the parts you don’t like, you elevate the parts that you do like, that agrees with your preconceived ideology.

All of this, needless to say, is dangerous. All of this is the kind of technique and tactic that despots and tyrants have used historically. What they do historically is that they convince people that there is no source of truth, that they are the only reliable source of truth. And they eliminate all opposition by eliminating all opposing, legitimate, sources of facts, analysis and truth.

Our responsibility in the resistance to this is to know the truth, to spread the truth, to hold accountable Trump and Republicans and Cabinet members who are spreading falsehoods and are discrediting the legitimate sources of truth.

Trump and the GOP continue to prove their utter callousness and to feign ignorance when it comes to Americans who will be harmed by their acts. Democrats like Reich are going to make sure the public knows exactly what is going on, and why.