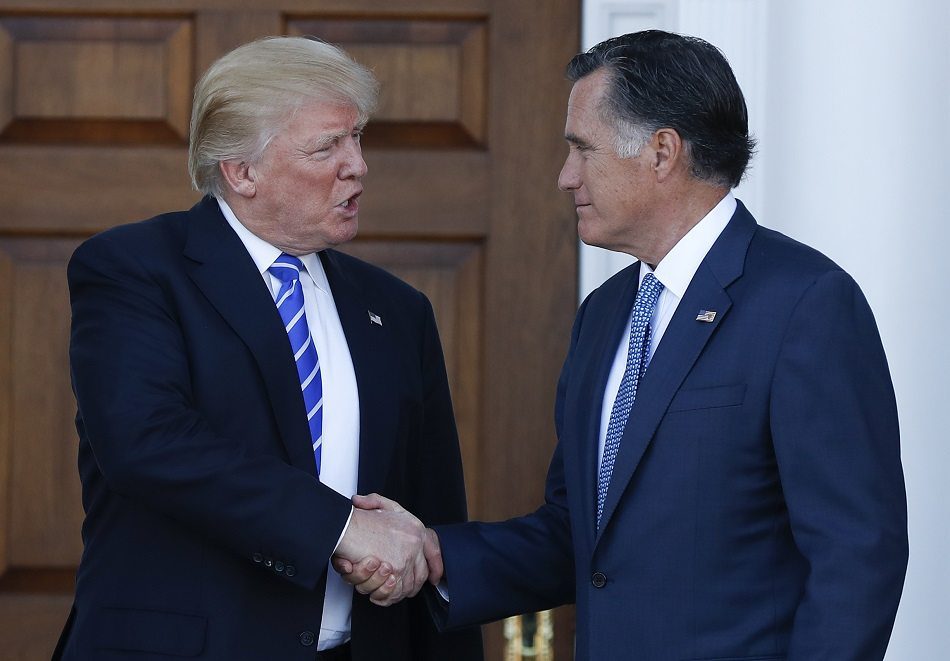 Former Republican presidential candidate Mitt Romney was one of the first major political figures to speak out forcefully against Donald Trump during the Republican primaries. Now it appears Romney, who is reportedly being considered for Secretary of State, is willing to overlook the bigotry he once criticized to make nice with the president-elect.

In a March 2016 speech at the University of Utah, Mitt Romney spoke out vociferously against Donald Trump:

"Donald Trump is a phony, a fraud. His promises are as worthless as a degree from Trump University," Romney said. "He's playing the American public for suckers: He gets a free ride to the White House and all we get is a lousy hat."

Romney may have seemed a surprising person to levy charges of racism and misogyny against Trump, given the racist dog-whistling and misogyny that derailed his own presidential campaign. But his criticisms appeared authentic.

Now it seems those appearances were deceiving: Romney met with the president-elect for more than an hour, for a "thorough and in-depth" conversation:

Mitt Romney after meeting with Trump: "We had a far reaching conversation with regards to the various theaters in the world." pic.twitter.com/tKPIYkaOmc

In addition, the anti-Trump PAC Our Principles, formed by a former Romney operative, which produced a powerful and highly shared ad detailing Trump’s misogyny, appears to have been scrubbed from the Internet. Being considered for Secretary of State has evidently moved Romney back into the Trump camp, and racism, bigotry, and misogyny are apparently no longer points of contention or worry. It is unknown if Romney brought up any of these topics in his discussion with Trump, but, as his statement indicates, he certainly no longer seems to believe that Trump is too harmful to support.

Romney’s sudden turnaround is indicative of a larger shift within the Republican party and the corporate news media. Trump’s racism, misogyny, and other prejudicial views are being normalized into mere disagreements or gaffes, and moves such as installing an avowed white supremacist in his White House staff are regarded and defended as simply a routine hiring choice, rather than a frightening glimpse of how this administration will wield its power over the country and especially over its most marginalized citizens.

Normalizing Trump and standing alongside him is the only path for Republicans to maintain some semblance of power within the new administration. So instead of continuing to speak out against Trump's dangerous bigotry, Romney might help move it forward — if he can reap the benefits along the way.