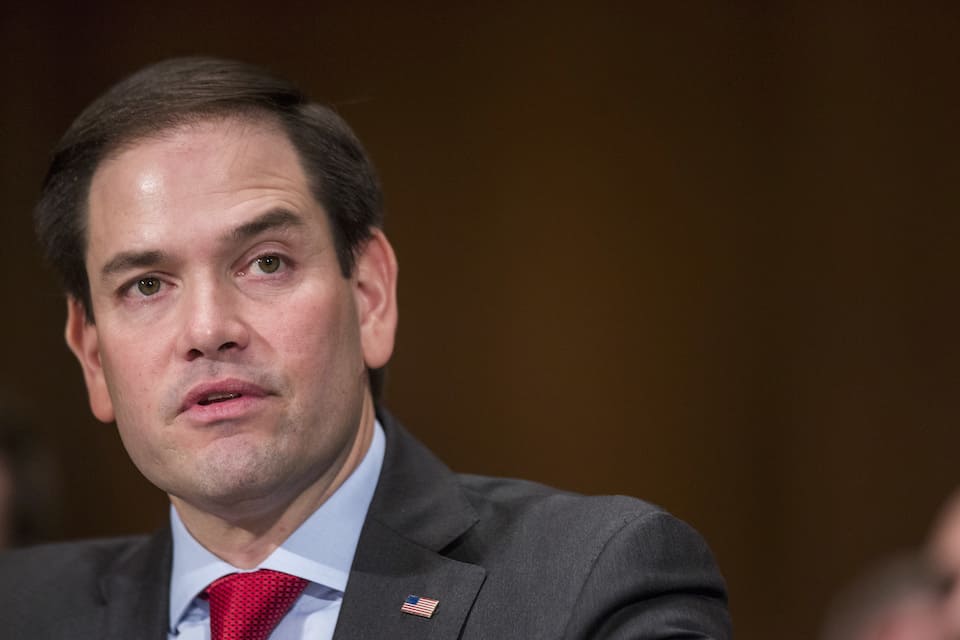 (AP Photo/Zach Gibson)
Get The American Independent in your inbox

Some Republican senators are breaking ranks to point out that the devastating gas attack ordered by Syria's government came soon after the Trump administration said they would no longer pursue the previous U.S. demand that Bashar al-Assad be removed from power.

In an interview with the AM Tampa Bay radio show, Senator Marco Rubio (R-FL) pointed out that the horrific gas attack ordered by Syrian President Bashar Al-Assad — in which dozens of children died, and the use of a nerve agent or other banned chemicals is suspected — took place after Secretary of State Rex Tillerson publicly acknowledged that his removal would no longer be an American priority.

Rubio noted, "It's concerning that the Secretary of State, 72 hours ago or a week ago, last Friday, said that the future's up to the people in Syria on what happens with Assad. In essence almost nodding to the idea that Assad was gonna get to stay in some capacity."

But I do believe that when you — and I'm not, by the way, believe [sic] that that was Secretary Tillerson's intention, nor do I believe that that's what he thought would happen — but if you're Bashar Al-Assad and they're basically sending you a signal that in the end, we just want you to finish this war quickly, and we don't like you, we think you're a bad guy, we think you do bad things, but we think you're better than the alternative, and at this point our priority is just ISIS, and we don't really care what happens after that in the short term — I think that is, in my view, something that would encourage him to do something like what we've just seen. And so I personally do not believe that it's coincidental.

Senator John McCain (R-AZ) also connected the Syrian action to the administration's rhetoric, telling CNN, "Bashar Assad and his friends, the Russians, take note of what Americans say. I'm sure they took note of what our Secretary of State said just the other day that the Syrian people would be determining their own future themselves — one of the more incredible statements I've ever heard."

In August of 2011, President Obama said, "The future of Syria must be determined by its people, but President Bashar al-Assad is standing in their way. His calls for dialogue and reform have rung hollow while he is imprisoning, torturing, and slaughtering his own people.  We have consistently said that President Assad must lead a democratic transition or get out of the way.  He has not led.  For the sake of the Syrian people, the time has come for President Assad to step aside."

But the Trump administration signaled earlier in the week that they would no longer prioritize Assad's removal from power. While describing him as a "war criminal," UN Ambassador Nikki Haley said, "Do we think he’s a hindrance? Yes. Are we going to sit there and focus on getting him out? No."

And Press Secretary Sean Spicer attempted to blame the attack on the Obama administration, describing it as "a consequence of the last administration's weakness and irresolution."

Russia has consistently backed the Assad regime, and has opposed rhetoric calling for his removal. And the Russian government is currently claiming that the gas attack was not done by Assad, a conclusion at odds with the international consensus.

The entire Syria issue is now Donald Trump's responsibility, and the words and rhetoric of Trump and his team may have major international consequences. The White House can play the blame game all they want, but the future of the situation in Syria is now in their hands — and even some in their own party are calling out their potentially disastrous moves.

Cartoon: People Who Should Stay Home