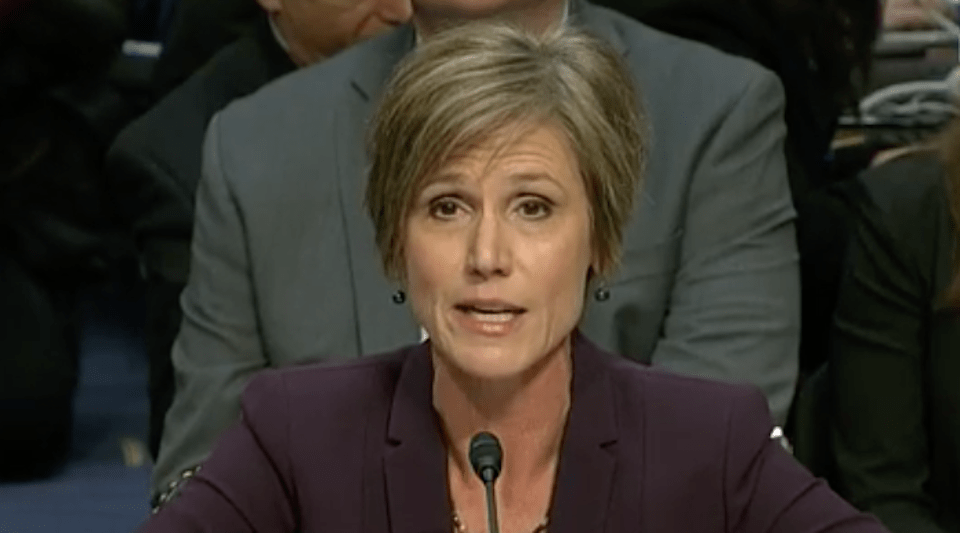 Former acting Attorney General Sally Yates testified to the Senate about her warning to the White House that then-National Security Adviser Michael Flynn was compromised and could be subject to Russian blackmail. The day she invited the White House to review such evidence was her last day at the Department of Justice.

Former acting Attorney General Sally Yates testified to a Senate subcommittee Monday that she had evidence that Michael Flynn was compromised and "could be blackmailed" by Russia.

That information has been previously reported in the course of multiple investigations into the Trump team's ties to Russia. What was not known until now is that on the very day Yates invited the White House to review the evidence she had on Flynn, she was removed from her position at the Department of Justice.

YATES: We told them that we were inclined to allow them to look at that underlying evidence, that we wanted to go back to DOJ and be able to make the logistical arrangements for that. This second meeting on the 27th [of January] occurred late in the afternoon, this is Friday the 27th. So, we told them that we would work with the FBI over the weekend on this issue and get back with him on Monday morning. And I called him first thing Monday morning to let him know that we would allow them to come over and to review the underlying evidence.

WHITEHOUSE: And was that the phone call, or was there a separate phone call?

YATES: There was the phone call initially to let him know I needed to come see him —

YATES: — two meetings, and then a phone call at the end to let him know —

WHITEHOUSE: That the material was available if he wanted to see it?

YATES: — that the material was available. He had to call me back, he was not available then, and I did not hear back from him until that afternoon of Monday the 30th.

WHITEHOUSE: And that was the end of this episode? Nobody came over to look the at the material?

YATES: I don’t know what happened after that because that was my last day with DOJ.

The Trump administration initially tried to prevent Yates' testimony, arguing that executive privilege barred her from testifying to Congress, but the public outcry for her views led to Yates agreeing to testify.

Yates raised her concerns with the Trump team via two meetings with White House Counsel Don McGahn and a phone call with him as well.

Yates first warned the Trump team about Flynn's problems on January 26, but Flynn was not fired until 18 days later, after news reports revealed that Flynn had made contact with Russian elements.