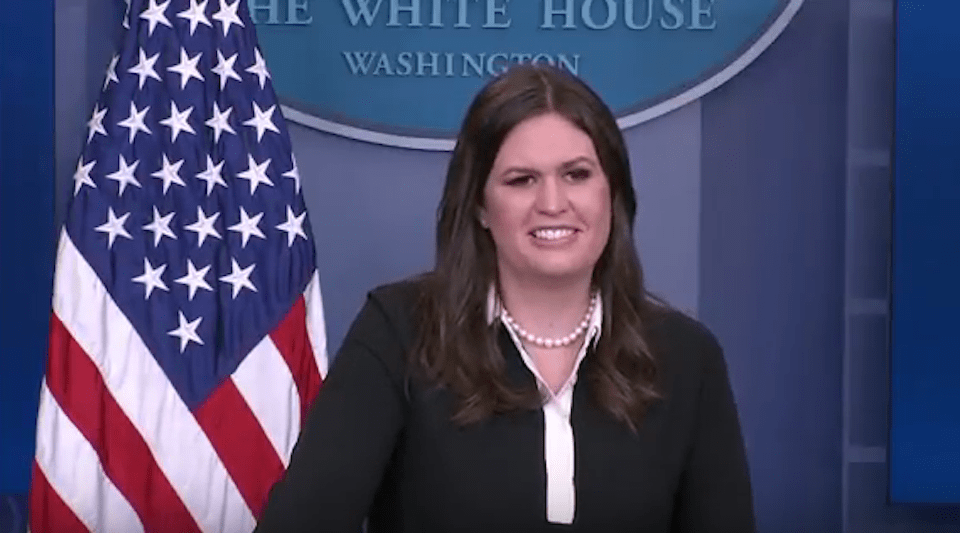 The White House deputy press secretary responded to criticism of Donald Trump's sexist tweets by outrageously claiming he has never promoted violence. This is a lie.

The truth is, he has. Many times.

During the presidential campaign, Trump repeatedly called on his protesters to commit acts of violence in his name. Unfortunately, some people did just that.

In an astonishing exchange with CBS News reporter Major Garrett during Thursday's press briefing, however, Sanders insisted no such thing had ever happened and that Trump bears no responsibility for the rhetoric he uses and its affects on our nation's political discourse.

GARRETT: Someone suggested in their tweet response or public announcement today that the president misconstrued one of the messages that should have been gathered from the shooting that involved Steve Scales and others. That the hostility of the verbal environment can create an atmosphere of violence. I'm not saying that, but members of Congress have said that about this particular tweet. That episode affected the president and those here at the White House personally very importantly and deeply. Do you have any reaction to that sentiment that conversations like this create an atmosphere that is either dangerous or one we need to avoid?

SANDERS: The president in no way, form, or fashion has ever promoted or encouraged violence of any kind. Quite the contrary. And he was simply pushing back and defending himself.

At a rally in Las Vegas, as a protester was removed from the building, Trump loudly told the audience, "I’d like to punch him in the face, I’ll tell you that." He continued, lamenting that in the "good old days," a protester would be attacked so that "they’d be carried out on a stretcher, folks."

In the same breath Trump then went on to endorse torture, using waterboarding — and worse.

When a Trump supporter assaulted a protester at another rally, Trump said the assailant "obviously loves the country" and that he had "instructed my people" to look into paying for his legal fees.

At another event, Trump invoked the specter of "Second Amendment people" responding to Hillary Clinton if she won the election and appointed judges the NRA didn't approve of.

Trump has repeatedly called for violence, and has encouraged acts of violence and made excuses for those who have engaged in violence. What his White House is saying now to defend his unpresidential behavior is appalling — and plainly untrue.