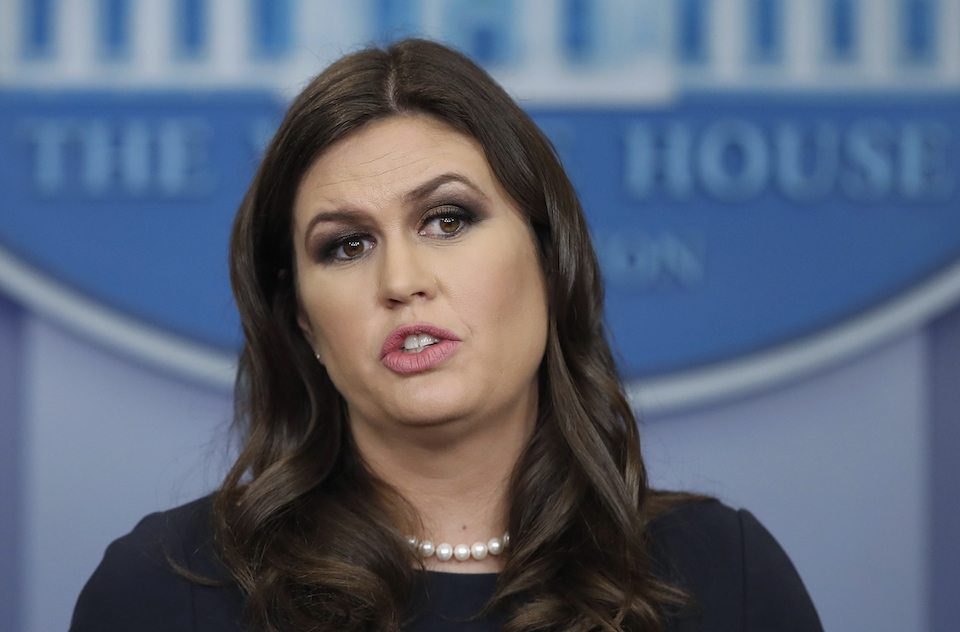 The White House loudly complained about the free press covering the recent indictments and guilty pleas of top Trump campaign officials on serious charges, including "conspiracy against the United States."

In response, Sanders complained that the media has been "completely obsessed" with covering the indictments and associated investigation, arguing that "there are a lot of other things happening around the country" that the press should be focused on.

Sanders also asserted that "Americans don't care too much" the corruption and criminality enveloping Trump and his administration.

KARL: Chief of staff John Kelly said that this special counsel investigation has been very distracting to the president. Can you elaborate on that? Is this affecting his ability to get his job done here?

SANDERS: I don't think it's at all affecting his ability to get his job done, and that wasn't the point he was making. You guys seem completely obsessed with this while there are a lot of other things happening around the country, and frankly a lot of other things that people care a lot more about, the media refuses to cover it, and I think that's the distraction.

Instead of the focus being constantly on tax cuts and tax reform, my guess is if you look at the records, the questions that I take in here day out, have far more to do with an investigation, that frankly most Americans don't care too much about, and a whole lot less to do with policies that actually impact them.

While there is a case to be made that the mainstream press focuses too much on the trivial, the argument that they shouldn't cover it when the chairman of the sitting president's campaign has been criminally indicted is absurd.

If Trump and his team wanted to avoid coverage of criminality and his presidency, they should have avoided repeatedly interacting with Russian elements who sought to interfere in the election. Had the Trump team not courted Russians, nor attempted to tamper with the investigation of those interactions by firing the FBI chief, there wouldn't be an indictment to cover or complain about.

But it all happened, and Trump has allowed the taint of corruption and criminality to fester in the Oval Office. Reporters would be derelict in their duties if they followed in the footsteps of propaganda outlets like Fox and misled and deceived their audiences about the charges and possible fallout.

Thanks to nobody's fault but his own, Trump has become extremely unpopular in a short time period. Trump, indictments, and scandal now go hand-in-hand, and no amount of disingenuous pleading about covering tax proposals can change that.

Furthermore, based on the unpopular provisions in the tax proposals, including the taxpayer-funded giveaways to wealthy figures like the Trump family, increased coverage might not be the panacea Sanders seems to think it would be.