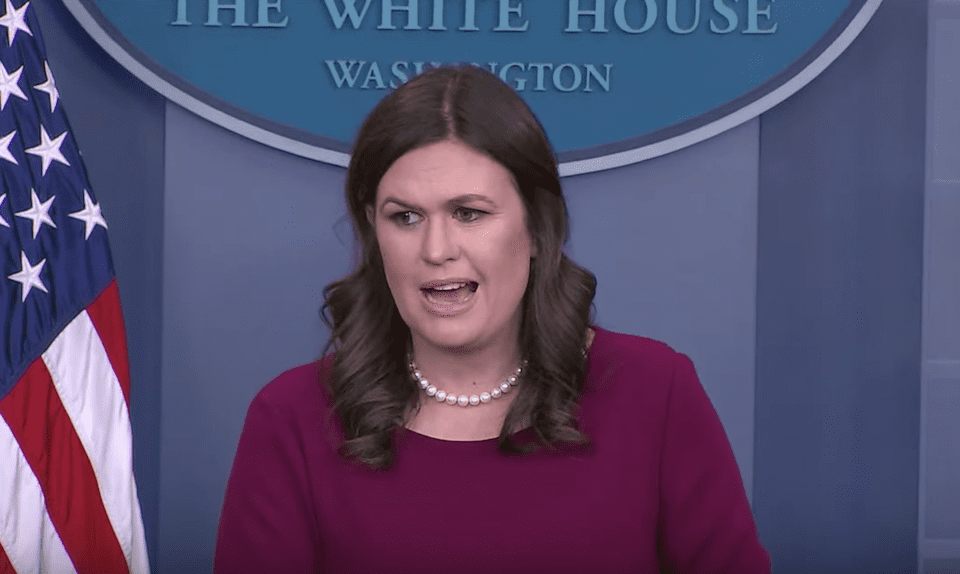 Sanders passed on another chance to express any support or sympathy for victims of domestic violence. Instead, she complained about how she had been portrayed.

Discussing Sanders, Holderness wrote, "I expected a woman to do better," responding to her refusal to say whether Trump believes the abuse allegations made by her and Jennie Willoughby, who is also Porter's ex-wife.

Both women have made allegations of abuse against him. Photos of Holderness with a black eye she attributed to Porter were published along with her op-ed.

Reporter Jeff Zeleny asked Sanders whether she has "any regret" for how she has explained the story to the American people in light of the op-ed by Holderness criticizing Sanders and the White House's subsequent cover-up.

"I would never presume to understand anything going on with that individual, nor would I think that she could presume what's going on with me or the way that I am responding."

Sanders then repeated her talking points from Monday. "Look, we've condemned domestic violence in every way possible. In fact, the president's budget that he released yesterday fully funds the Violence Against Women Act. We're looking for ways that we can take action to help prevent this from ever happening to anyone. And to presume that I feel differently is simply a very strong mischaracterization of who I am and who the White House is and what our actions are focused on and what we're trying to do here."

The remark was yet another instance of the Trump White House making the issue about themselves rather than addressing the alleged victims of abuse directly.

Trump has continued to refuse to use his elevated platform to address the women, instead preferring to make remarks favoring Porter and praising his service.

The defensive posturing from Sanders came just hours after FBI director Christopher Wray, in sworn congressional testimony, made it clear the White House has been lying about how they handled Porter.

He testified that the investigation into Porter had been completed, while Sanders and the White House have insisted that they did not act on the accused aide because an investigation was not complete.

Porter was allowed to operate in the White House and was given access to classified material, even as these determinations had already been made by intelligence agencies and presented to Trump.

Instead of admitting to a mistake, owning up to how they have mishandled a sensitive situation and insulted the women here and women across the country, Sanders chose a different path. She went on defense, made the story about herself, and continued Trump's ongoing attacks against women.