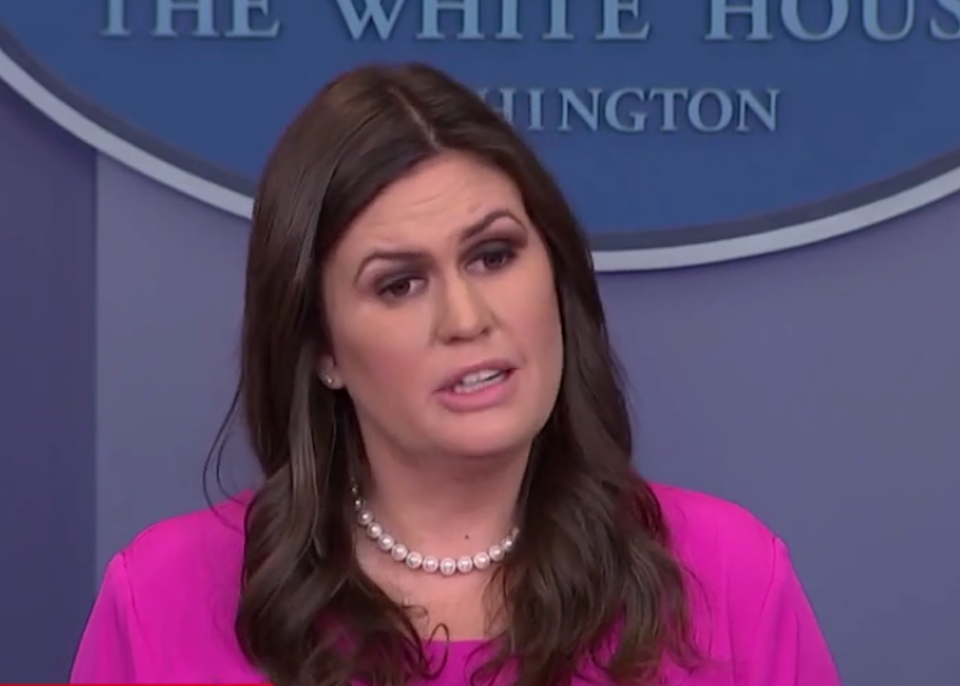 In a disastrous blow to Donald Trump, two campaign officials have been indicted and a third has pled guilty. But according to the White House, this is all about Hillary Clinton.

Despite three separate Trump campaign officials busted by the feds, the White House is absurdly, ridiculously, laughably insisting this has nothing to do with Donald Trump or his campaign.

Instead, according to White House press secretary Sarah Huckabee Sanders, this has "everything to do" with Hillary Clinton.

During Monday's press briefing, that was the spin the White House is offering to try to distance Trump from his own campaign:

Not a single word of that is true, of course.

On Monday, it was revealed that Trump campaign adviser George Papadopoulos pled guilty to charges of lying to the government about Trump campaign attempts to collude with Russia during the election.

Meanwhile, two top campaign officials, Paul Manafort and Rick Gates, were indicted for conspiracy against the United States and also misleading government investigators — who are investigating the Trump campaign's collusion with Russia and Trump's attempts as president to obstruct that investigation.

Gates continued to be a Trump adviser after Trump took office and was called by White House counselor Kellyanne Conway part of the "core four."

None of that has anything to do with Hillary Clinton — except to the extent that she was the victim of an apparent conspiracy by members of Trump's inner circle to work with the Russian government in its explicit mission to install Trump in the White House.

The outright lying by Trump and his spokespeople, and the increasingly pathetic attempt to somehow pin the Trump team's misdeeds on his political opponent, are outrageous and unpresidential. And given that the investigations are apparently ramping up — not winding down, as Sanders has also falsely claimed — it could get much uglier.

And that is all on Trump and his team.