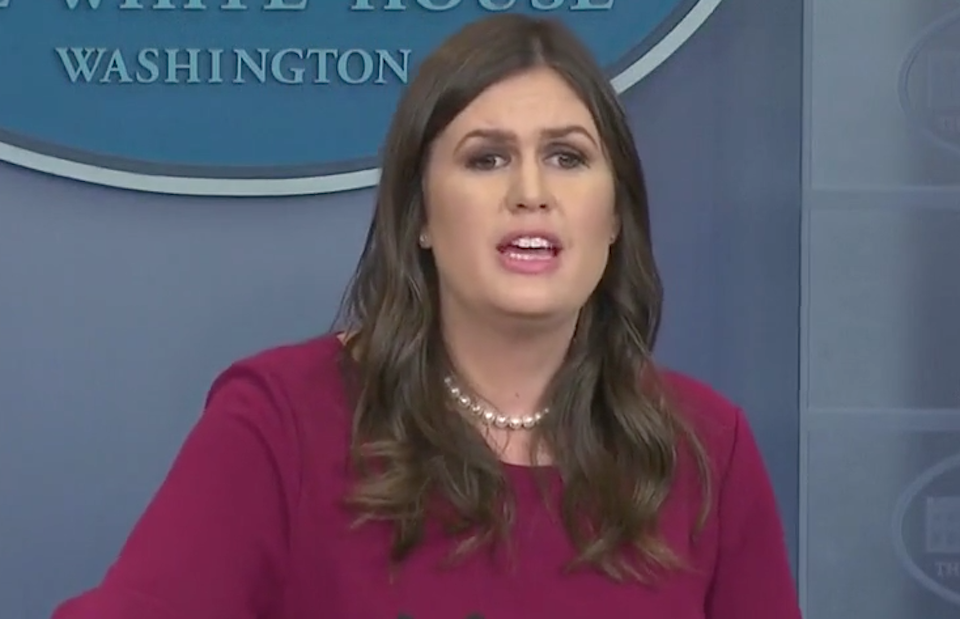 Donald Trump's response to the disastrous hurricane that devastated Puerto Rico has been belated, defensive, cruel, and pathetic.

Among his many failures to appropriately conduct himself during the crisis, Trump has rabidly attacked San Juan's mayor, Carmen Yulin Cruz, for begging the government to help save her people — who have been largely without food, water, and electricity.

Trump has responded by attacking her on Twitter, and at Thursday's White House press briefing, Sarah Huckabee Sanders piled on in a stunning minute-long tirade about Cruz's inadequate appreciation for Trump's visit to the island earlier this week.

"I think that it is sad that the mayor of San Juan chose to make that a political statement instead of a time of focusing on the relief efforts," Sanders said.

It's an appalling thing to say about Cruz, who has been completely focused on trying to get relief for her constituents for the past week. It is Trump, not Cruz, who has been obsessed with political statements instead of helping the people of Puerto Rico at such a desperate time.

"The president invited her to be part of that conversation," she said. "To me, that would be the time and the place that she should have weighed in and asked for what she needed and laid out what she was asking for for San Juan. She didn't."

Laying out what she needs for San Juan is exactly what Cruz has been doing while Trump launches petty Twitter attacks against her and insists that the devastation reported from the island is "fake news."

"Instead," Sander continued, "she chose to wait until the president left and then criticized him on TV, which actually is the wrong thing for her to do for her constituents. And I hope next time she's given the opportunity to help her constituents, she'll take it."

Trump's visit to Puerto Rico on Tuesday was embarrassing and disgraceful. He clearly viewed it as a day of photo ops, treating survivors of a major natural disaster as nothing more than props. He smiled for the camera, threw rolls of paper towels at a crowd, and scoffed at the purified water island residents have been drinking in order to survive.

All the while, he has continued to complain about the "ingrates" of the island and the "fake news" that isn't reporting on the "great day" he had there.

It is bad enough that the impulsive, impetuous president of the United States can't help but lash out at a mayor who desperately pleads for his help. That other members of Trump's team would do the same suggests that such deplorable behavior is in fact a strategy. A deeply ugly one.