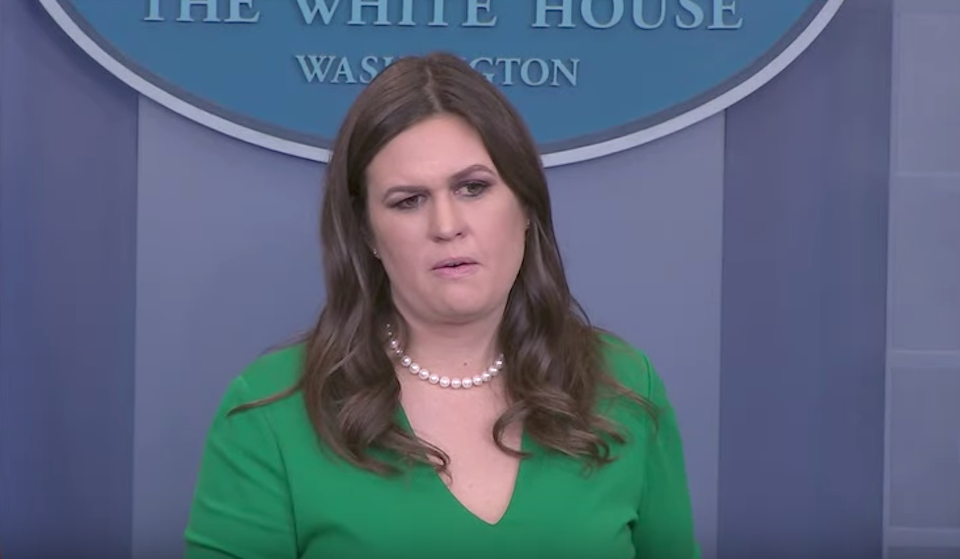 The Trump administration refused to condemn comments from Nazi sympathizer and former White House staffer Sebastian Gorka, who went on Fox News Thursday and said that Hillary Clinton should be executed.

Press secretary Sarah Huckabee Sanders was asked about Gorka's comments, in which he said Clinton should be convicted of treason, just like Julius and Ethel Rosenberg.

Citing a debunked conspiracy theory the Trump administration is circulating about Clinton, Gorka said, "This is equivalent to what the Rosenbergs did, and those people got the chair. Think about it."

Instead of immediately condemning the statement, Sanders laughed and said, "I'm not going to comment on Sebastian Gorka," but then added that "there is a lot of cause for concern" and the conspiracy theory "should be looked into."

REPORTER: I want to ask you about a comment that Sebastian Gorka made on Fox News. I know that he doesn't work for the White House anymore, but he seems to be very — still involved and knowing what's going on here. He was talking about the uranium one deal and Hillary Clinton and said, "If this had happened in the 1950s, there would be people up on treason charges right now. This is the equivalent to what the Rosenbergs did. And those people got the chair. Think about it." Does the president agree with that statement?

Despite his soft spot for the Third Reich and lack of qualifications, Gorka served for months as deputy special assistant to Donald Trump, working alongside white supremacist Steve Bannon to advise Trump. When others in the administration tried to remove Gorka, Trump and Bannon personally intervened to save his job for another three months.

Death threats should be beyond the pale. It should be a simple matter — even if she still wants to promote the right's latest anti-Clinton conspiracy – for Sanders to denounce Gorka's violent rhetoric. She didn't, because she didn't want to.

Trump infamously referred to Nazis as "very fine people." He must have had people like Gorka in mind, which would explain the refusal to rebuke him.