Dr. Christine Blasey Ford remembers all too clearly what happened to her 'upstairs.'

"Isn't there something wrong with the president of the United States mocking someone who said she was sexually assaulted?" asked CNN's Jim Acosta.

"It seemed to me that he was stating facts that Dr. Ford it herself laid out in her testimony," Sanders replied.

On one level, it's ridiculous that Sanders would deny that Trump was mocking Ford.

Trump's mockery of Ford, who bravely testified in public about being sexually assaulted by Supreme Court nominee Brett Kavanaugh, was obvious. And it was so cruel, childish, and indefensible that even Fox News and die-hard Kavanaugh fans like Sen. Orrin Hatch (R-UT) couldn't defend it.

But Trump wasn't just being crass — he was also brazenly lying about what Ford said in her testimony.

And Sanders is brazenly lying when she labels Trump's disgusting comments as "facts."

Actually, Murray pointed out, Ford remembers both the year and the neighborhood.

Ford said she had one beer, but that was far from the "only thing" she remembered; she also said she was "100 percent" certain it was Kavanaugh who assaulted her.

And as for "upstairs" versus "downstairs," Ford vividly remembers, and laid out in painful detail, where she was and what the layout of the house was like when she was sexually assaulted in an upstairs bedroom.

NBC chief White House correspondent Hallie Jackson also laid out all the full quotes from Murray's thread in one place: 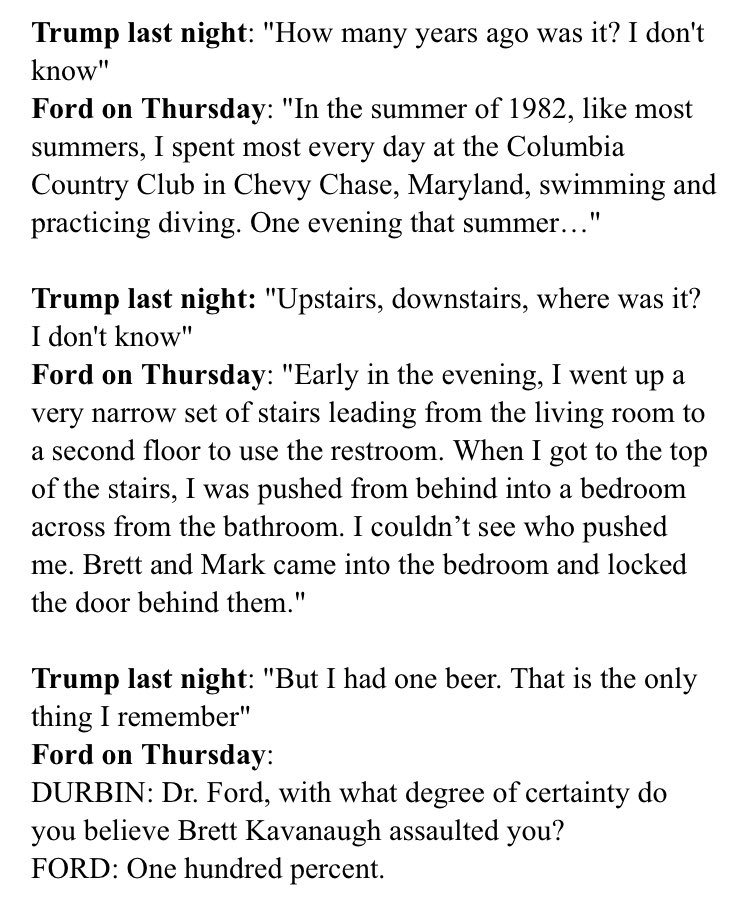 These are the real facts — and no amount of mockery from Trump, or spin from Sanders, will change them.