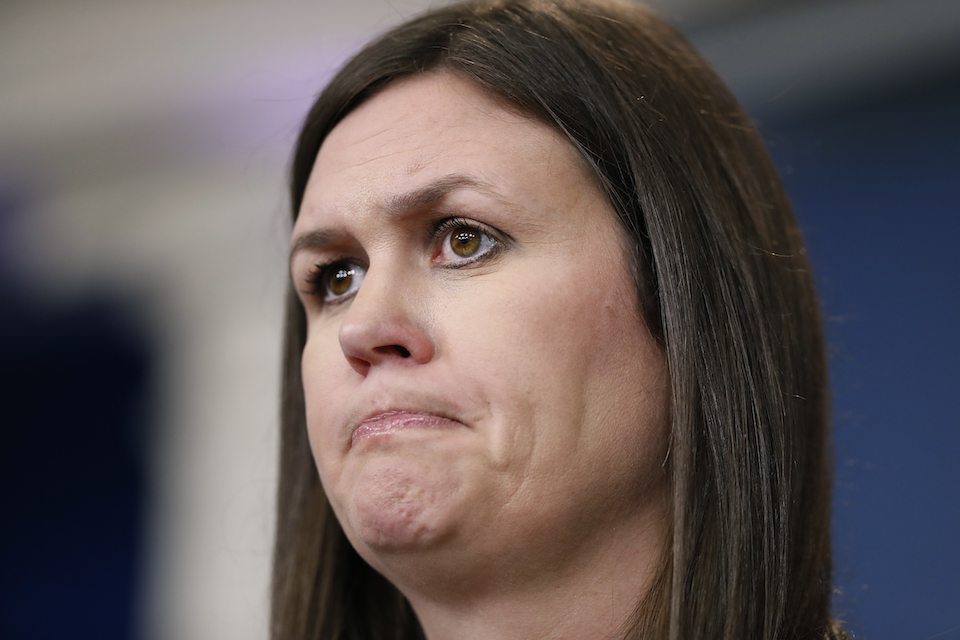 So much for seeking bipartisan cooperation.

The morning after Donald Trump's State of the Union address, which his advisers pitched as some sort of hollowed call for unity, White House press secretary Sarah Huckabee Sanders appeared on CNN and immediately lashed out at House Minority Leader Nancy Pelosi.

And Sanders did so in a weirdly personal and demeaning way.

Pressed by host Chris Cuomo about how Trump could unify Congress when Democrats like Pelosi showed such disapproval of his agenda Tuesday night, Sanders viciously attacked Pelosi, while questioning her love of country.

"I think Nancy Pelosi looks like that all the time. I think she should smile a lot more often. I think the country would be better for it," said Sanders.

It's an audacious suggestion that the country's welfare in any way depends on the frequency of the Democratic House leader's smiles.

"She seems to kind of embody the bitterness that belongs to the Democrat [sic] Party right now," Sanders continued. They have to make a big decision. They need to decide, Chris, do they love America more than they hate this president?"

White House press secretary Sarah Sanders: I think Nancy Pelosi "should smile a lot more often ... she seems to kind of embody the bitterness that belongs in the Democrat party right now" https://t.co/eFCFTiHAT1

This was the same sexist trope that Republicans, and many in the media, used against Hillary Clinton during the 2016 campaign: Women politicians need to smile more if they want to be liked and respected.

What Pelosi, and so many Democrats, did during the State of the Union was register their rejection of Trump's reactionary, white nationalist agenda.

What Pelosi did not do was stand up in Congress and yell "you lie" at the president of the United States, the way Rep. Joe Wilson (R-SC) did in 2009, during Barack Obama's first State of the Union.

In fact, the Democratic leader made clear to members that she did not want to see any disrespectful outbursts during Trump's address.

In that sense, Pelosi showed a lot more class than Sanders.