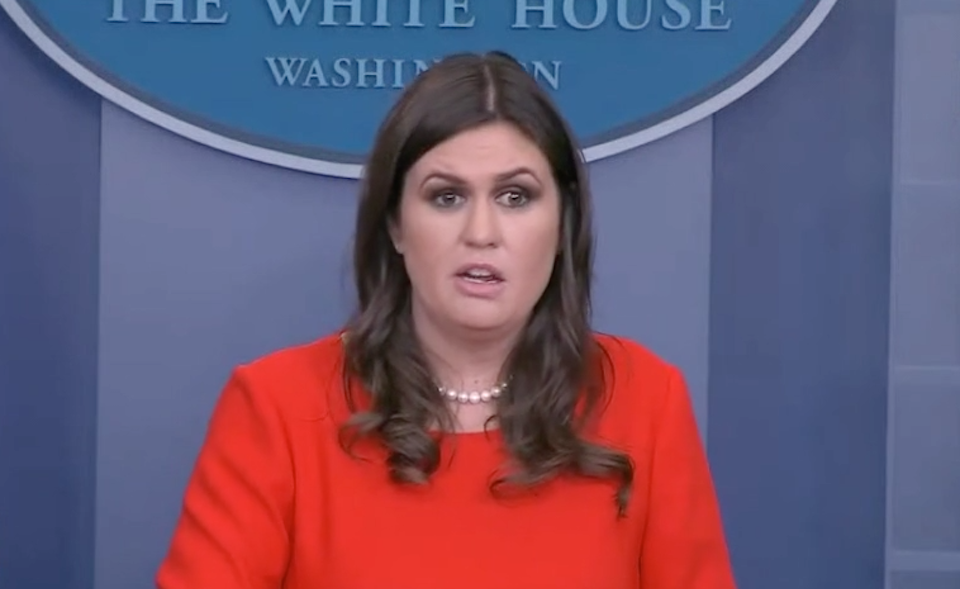 White House press secretary Sarah Huckabee Sanders would not directly condemn the practice of slavery, called a reporter "disgusting" for asking, and continued the Trump administration's soft approach to racism.

White House press secretary Sarah Huckabee Sanders would not condemn the practice of slavery, and complained that simply asking the question was "disgusting."

Sanders was asked Wednesday by American Urban Radio Networks White House correspondent April Ryan if the Trump administration believes slavery is "wrong." It was the second time Ryan asked, after being ignored during Tuesday's briefing. The White House has a history of ignoring and disrespecting Ryan, a veteran African-American journalist.

Instead of condemning the practice of slavery and human bondage, Sanders said Ryan's question was "disgusting," adding that it is "absurd to suggest that anyone inside of this building would support slavery."

RYAN: What is the definition of compromise as it relates to slavery and the Civil War?

SANDERS: Why don't you ask it in a way that — you're apparently accusing me —

RYAN: I'm not accusing. I'm asking a question. Seriously. The question is, does this administration believe, does this president believe, slavery was wrong? And before you answer, Mary Frances Berry, the historian, said in 1860, there was a compromise. The compromise was to have southern states keep slavery. But the Confederacy fired on Fort Sumter. That caused the Civil War. And because of the Civil War, what happened? The North won, and there's no slavery.

SANDERS: I think it is disgusting and absurd to suggest that anyone inside of this building would support slavery.

The question of the administration's position on slavery came up because of recent comments by White House chief of staff John Kelly, in which he praised Confederate general Robert E. Lee as an "honorable man."

Kelly demonstrated his ignorance of American history, claiming "the lack of an ability to compromise led to the Civil War."

The Trump administration official also whitewashed the history of the war, in which one side fought against the United States to keep human beings as slaves. Kelly instead said that the conflict involved "men and women of good faith on both sides."

The entire topic is in the national discussion because Trump has repeatedly and unapologetically voiced his support for racism, bigotry, and white supremacy by hailing statues of Confederates as "beautiful." Trump opposes the national movement to tear down the figures that honor the treasonous pro-slavery Confederacy.

After a white supremacist killed Heather Heyer in Charlottesville, Virginia, Trump described white supremacists and Nazis as "very fine people." Coupled with his previous comments, key hires in his administration, and the policies he has pursued, the question of where the Trump administration stands on slavery is unfortunately legitimate.

The failure to answer, and the accompanying vitriol in the evasive response, speaks volumes.