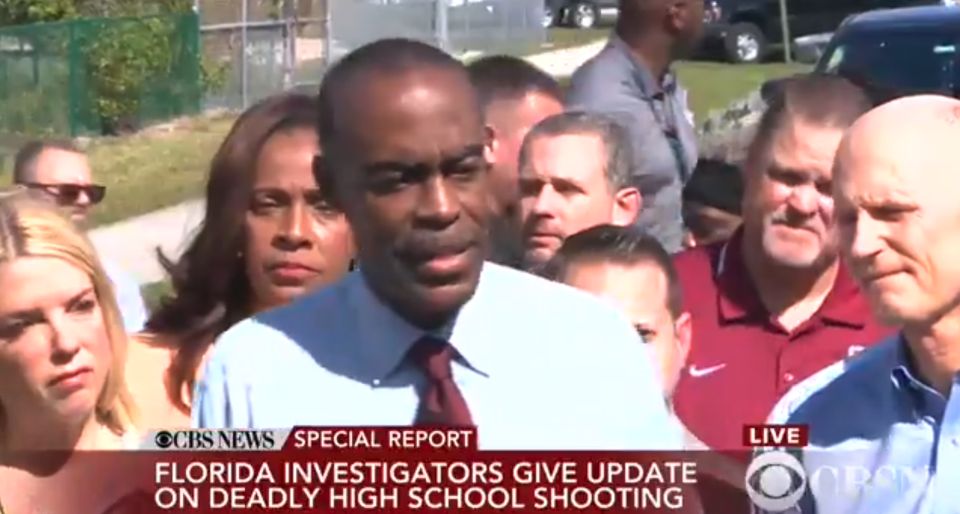 A Florida school superintendent stood up to two of the NRA’s biggest supporters to demand action.

Two of the NRA's strongest allies in Florida were publicly shamed as a school superintendent delivered a powerful message from students to lawmakers on gun violence.

Broward County superintendent Robert Runcie spoke at a press conference to give updates on the bloody massacre at Marjory Stoneman Douglas High School in Parkland, Florida. The Wednesday tragedy was the 18th school shooting of 2018 and is the third-deadliest school shooting in modern American history.

As Runcie spoke, he was flanked by Florida Attorney General Pam Bondi and Gov. Rick Scott. Both Bondi and Scott have been staunch allies of the NRA, which opposes any legislation on gun violence.

Despite the NRA's presence by proxy, Runcie was loud and clear in his message.

"Students have been reaching out to me, reaching out to staff, probably board members and others saying that now, now is the time for this country to have a real conversation on sensible gun control laws," he said.

"Students have been reaching out to me, reaching out to staff, probably board members and others saying that now, now is the time for this country to have a real conversation on sensible gun control laws," Broward Superintendent Robert Runcie says https://t.co/a1MXsLNIPw pic.twitter.com/g85Q7wweOB

The NRA, Bondi and Scott's benefactors, has opposed the justice that students are demanding. And the two Florida Republicans have been more than willing to help the extremist organization.

Bondi used her position to put the weight of the entire state of Florida behind an NRA attempt to overturn federal law and put more guns into the hands of 18- to 20-year-olds.

The suspected shooter at Stoneman Douglas High is 19.

Scott has been an even bigger champion of the organization, and the NRA has showered him with praise.

"Governor Rick Scott has now signed more pro-gun bills into law — in one term — than any other governor in Florida history."

When he ran for re-election, the NRA endorsed him and noted he had "A+" rating, which it describes as "the highest possible rating and is reserved for elected officials with an excellent public record on critical NRA issues."

The NRA hailed Scott's support of Florida's "Stand Your Ground" law, which allows civilians to use deadly gun force in situations where they simply perceive a threat, whether real or not.

It was most infamously invoked in the murder of Trayvon Martin, who was gunned down in his own neighborhood in Florida when he was just 17.

Studies have found that the law has led to more, not less, gun deaths.

The NRA has powerful allies, from the White House to the state government of Florida. But individuals like Runcie see the carnage wrought in American communities as a result of the NRA's stance on guns and, unlike Scott and Bondi, stand instead with the children who demand justice for their fallen friends.