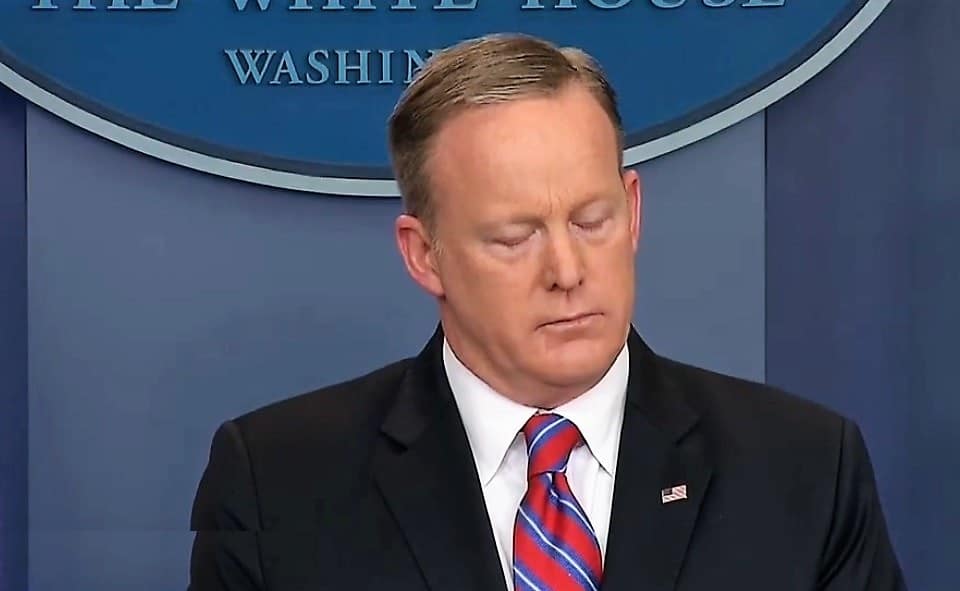 Donald Trump was humiliated by his own White House press secretary, Sean Spicer, who was unable to name a single Trump agenda item that has passed legislatively as his first 100 days in office come to a close.

Donald Trump's first 100 days in office will wind down in just over a week, and when the inevitable political hot takes are written, the most devastating critique will likely come from inside the White House.

At the White House daily briefing, reporter George Condon asked Press Secretary Sean Spicer to name a single legislative accomplishment from Trump's agenda that he could boast when the 100-day mark hits.

Spicer failed spectacularly, offering an excuse right out of the — "We're not done yet," he said — and finally citing just one bill, which was actually sponsored by a Democrat:

CONDON: Looking ahead to the 100-day mark and setting an side executive orders, can you say what the single piece of legislation that you are proudest that you got through the Congress that was on the president's agenda?

SPICER: Well, a few things on that. Number one, we're not done. We've got a little days before we hit the 100-day mark. So I think what you've seen out of this White House is a very robust agenda of activity. There's a lot of executive orders that I think the president's been pleased with, not only what they've done or what they will do, but what they've done. When you look at immigration in particular, we see a fairly significant drop at the border. I think on jobs, there's been a lot of activity that we've been very proud to see. American manufacturing and job creation. But then there's pieces like what we did today, that I think if you're a veteran who served our country, to know that you have additional options to get health care in a timely manner, or not just — but a geographically friendly manner so you're not driving hours is very helpful and a strong symbol of how we treat our veterans.

Even by padding out his answer with vague references to things like Trump's failed executive orders — which do not require the far more difficult task of earning the necessary votes to pass a bill in Congress — Spicer could barely fill a minute of screen time with Trump spin.

The one legislative "accomplishment" Spicer conspicuously failed to mention? The gutting of Title X funding for family planning, designed to attack and affect Planned Parenthood in particular. Trump signed the bill in private, and the fact that his administration is not boasting about it is a sure sign of how overwhelming unpopular that move is.

Spicer appears to have vindicated former Obama Communications Director Jen Psaki's assessment of Trump's first 100 days, of which she said, "You can't put lipstick on a pig."

As it turns out, Trump's own spokesman could not even manage ChapStick.