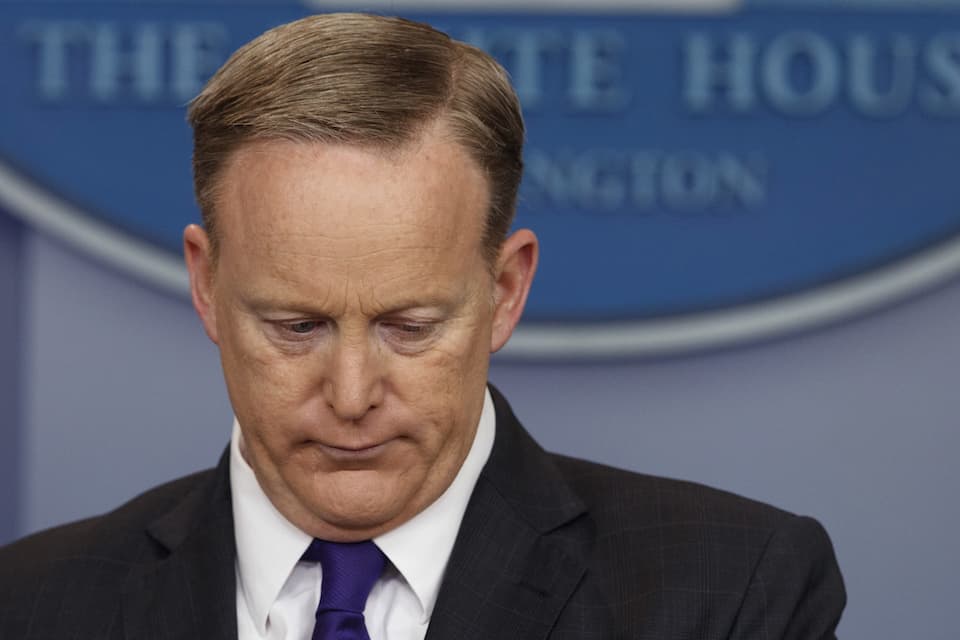 White House Press Secretary Sean Spicer spent the better part of the week trying to sell the absurd lie that he did not know who walked House Intelligence Chairman Devin Nunes (R-CA) into the White House to be fed information that he used to defend Donald Trump. Eventually, Spicer abandoned that lie and said he is just not going to talk about "process" anymore, but a pair of new and promising threads emerged in its wake.

Spicer is not incapable of delivering an emphatic response, but he waffled when asked a pair of new questions involving the Nunes cover-up.

lol, @kwelkernbc appears to have literally broken Sean Spicer with this question. What a terrible, terrible liar he is. pic.twitter.com/Ovvxncrc5e

WELKER: Thanks, Sean. Did the President direct anyone in this White House or in his national security team to try to find information or intelligence to back up his assertion about wiretapping?

SPICER: I don’t — I’m not aware of anything directly. I’d have to look into that in terms of — again, there’s two sides to this. One is the information side, and two is the policy and the activities and the legal piece of what happened. And I don’t — those are big buckets, if you will.

Spicer then left similar wiggle room when The Daily Caller's Kaitlan Collins asked about an even more explosive allegation — that Nunes may have been promised a White House post in the future:

Promising thread to pull at under oath: Spicer, asked if Nunes has been promised a WH post: "Not that I'm aware." Not "of course not!" pic.twitter.com/YF3JPrKjzV

COLLINS: Did anyone in the White House ever raise the possibility of a Cabinet position or a top intelligence post later on in the administration for Devin Nunes?

SPICER: Not that I'm aware.

Spicer first asserted that he did not know, then quickly shifted to not commenting at all, as if he had caught himself saying something that could later make him vulnerable.

Spicer is one of several Trump administration figures, including Vice President Mike Pence, who frequently gives the sort of careful answers that would insulate them from having made false statements, should new information come to light. When Spicer uses the "not that I'm aware" dodge, that is the signal for reporters to grill him all the more strenuously on the point.

If Trump directed the Nunes cover-up, and promised Nunes a quid pro quo, it would be just one more thing to push Trump's illegitimate presidency over the brink, and onto the garbage heap of history.