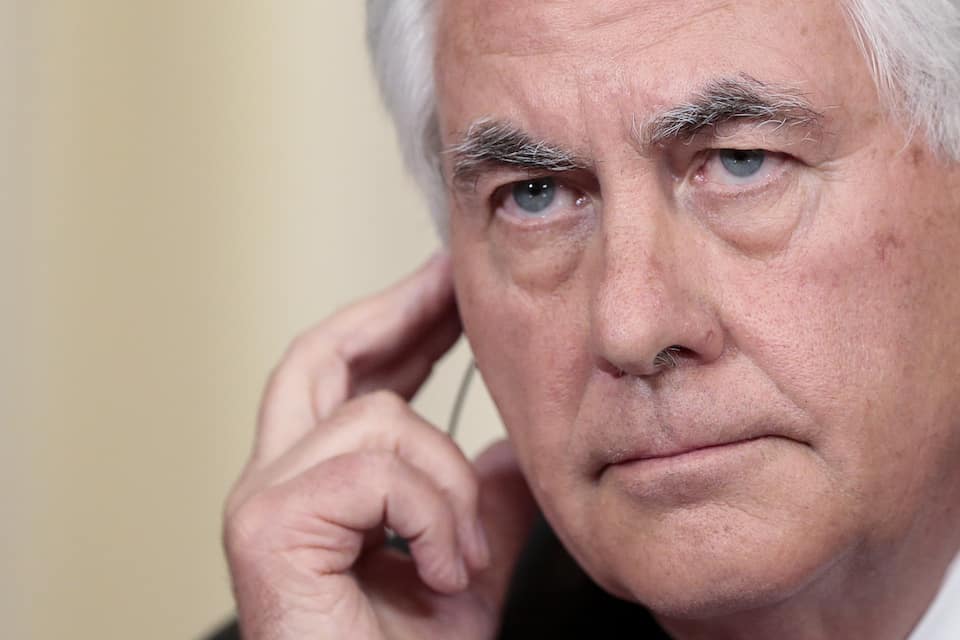 As the Trump administration continues to be mired in allegations of being too close to Russia, Secretary of State Rex Tillerson is doing nothing to ease those valid worries.

In his testimony before the Senate Foreign Relations Committee, Secretary of State Rex Tillerson showed why he earned the Order of Friendship from Russian President Vladimir Putin.

When asked to support a recent bipartisan sanctions proposal aimed at Russia, the former Exxon CEO demurred, preferring "flexibility" in dealing with the country that recently attacked the very core of our democracy.

Top Democrats and Republicans on both the Banking and Foreign Relations Committees recently introduced a new proposal which "calls for strengthening current sanctions and imposing new ones on corrupt Russian figures, those involved in human rights abuses and those supplying weapons to the government of Syrian President Bashar Assad."

The proposal would also require a congressional review if the administration tries to ease other sanctions aimed at Moscow, such as returning property to Russia, which was shuttered after they interfered with our election.

Perhaps the administration is hesitant to penalize those "responsible for malicious cyber activity on behalf of the Russian government," the third prong of the bipartisan deal.

Rather than throw their support behind one of the few bipartisan attempts to deal with Russia's interference, Tillerson said that the United States and Russia "have some channels that are open where we're starting to talk, and I think what I wouldn't want to do is close the channels off with something new."

Statements like this are why a majority of Americans worry that Trump is "too friendly" with Russia.

But not all Senate Republicans are carrying Trump’s water on this one. Stalwart Trump ally Lindsey Graham of South Carolina is raising the stakes, recently stating that anything short of supporting this effort would be tantamount to "betraying democracy:"

Some Republicans are trying to defend the administration, but probably not the way Trump would like.

Sen. Bob Corker of Tennessee, Chair of the Senate Foreign Relations Committee, chalked up Tillerson’s noncommittal to incompetence rather than malevolence, saying that the administration hasn’t "gotten into the finite details."

That statement inspires exactly zero confidence in Tillerson and his team.

At the end of the day, wishy-washy statements from Tillerson show an administration that is flirting dangerously close with the idea of "betraying democracy." When people speak of the need to put country ahead of party, the country they are talking about is not Russia.

While former FBI Director James Comey warns that Russia is "coming after America," Tillerson is dragging his feet.