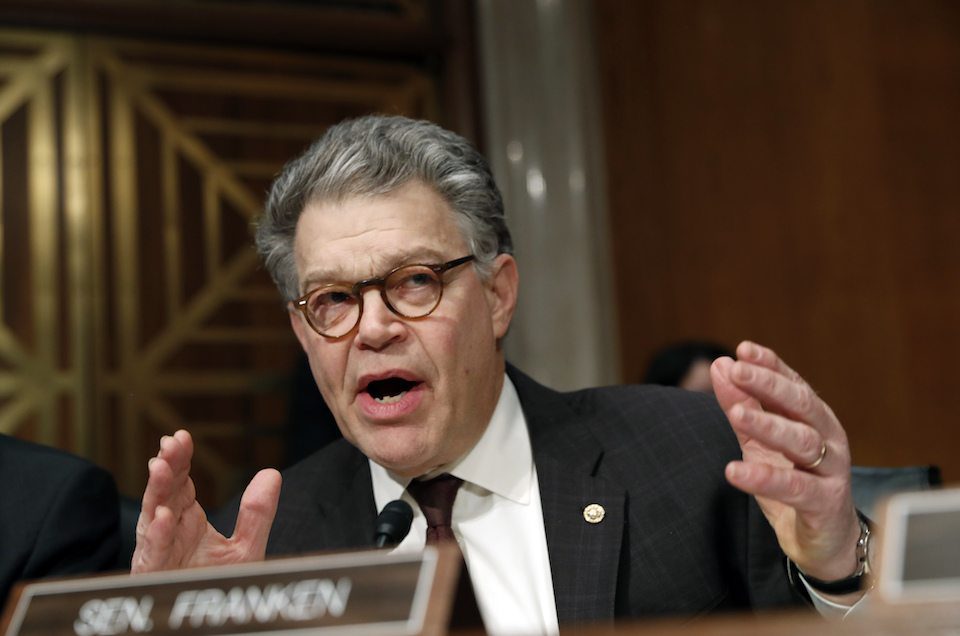 Minnesota Sen. Al Franken is blocking a racist judge Trump nominated to the 8th Circuit. Now Mitch McConnell is threatening to change the rule that allowed him to do it.

Earlier this year, Republicans rewrote Senate rules to steal a seat on the Supreme Court. And that was only the beginning. Senate Republicans left open a huge number of federal judgeships for Donald Trump to fill.

But Democratic Sen. Al Franken of Minnesota is standing in the way of one particularly extreme appointment.

Trump has nominated David Stras, a justice on the Minnesota Supreme Court, to a vacancy on the 8th Circuit Court of Appeals. He did so in violation of longstanding tradition, declining to meet with or consult Franken or his colleague, Sen. Amy Klobuchar, before selecting a judge from the state they represent.

One of Stras's most consistent political views is an opposition to school integration. He clerked for Justice Clarence Thomas, helping him write an opinion that called racial diversity a "faddish slogan" and institutional racism a "conspiracy theorist's belief." He also attacked a pro-school integration decision of Justice Anthony Kennedy, saying lower court judges put "way too much emphasis" on it.

Franken has blocked Stras from a hearing by refusing to return his "blue slip," a Senate tradition that dictates when a judge is nominated, both senators from the judge's state must give their written approval.

Senate Majority Leader Mitch McConnell is enraged, and has once again raised the possibility, floated for months by the GOP, of another partisan Senate rule change, ending blue slips for appellate court judges.

"My personal view is that the blue slip, with regard to circuit court appointments, ought to simply be a notification of how you're going to vote, not the opportunity to blackball," said McConnell, despite the fact that his party frequently used blue slips to block President Barack Obama's judges.

McConnell is not the only angry voice. Judicial Crisis Network, a group that advocates right-wing judicial appointments, actually took out an attack ad on Franken for blocking Stras.

But Franken's stance was praised by others, including former Vice President Walter Mondale, who voiced his support in an editorial for the Minneapolis Star-Tribune.

"Franken has acted appropriately in defense of Senate procedure," he wrote, "and he is also right to oppose Stras on the merits." Mondale, who authored the Fair Housing Act when he represented Minnesota in the Senate, expressed his particular concern about what "Stras' confirmation could mean for the act and other civil-rights laws."

Calling the block a "bold action," Mondale wrote that it was "Trump's own failure" to consult Minnesota's senators in the process that justified such an action.

It is unreasonable to ask that Franken defer to a Senate tradition while a partisan White House ignores that very same tradition. Without the participation of the White House, Franken cannot single-handedly restore comity to the Senate — and in attempting to do so, he would risk being played for a sucker.

For the most part, Trump has farmed out the task of picking new judges to the right-wing "judicial pipelines" of the Federalist Society and the Heritage Foundation, conservative think tanks that groom far-right lawyers and academics for the court system. By and large these picks are incredibly extreme, like John Bush, Trump's 6th Circuit appointee who ran a far-right blog and claimed abortion is worse than slavery.

Franken raked Bush over the coals at his confirmation hearing. Now he is standing in the way of another extremist Trump nominee.

McConnell can bluster and make all the threats he wants. But even if Republicans follow through and kill the blue slip, Franken is not to blame for the partisanship over court nominations. They are.