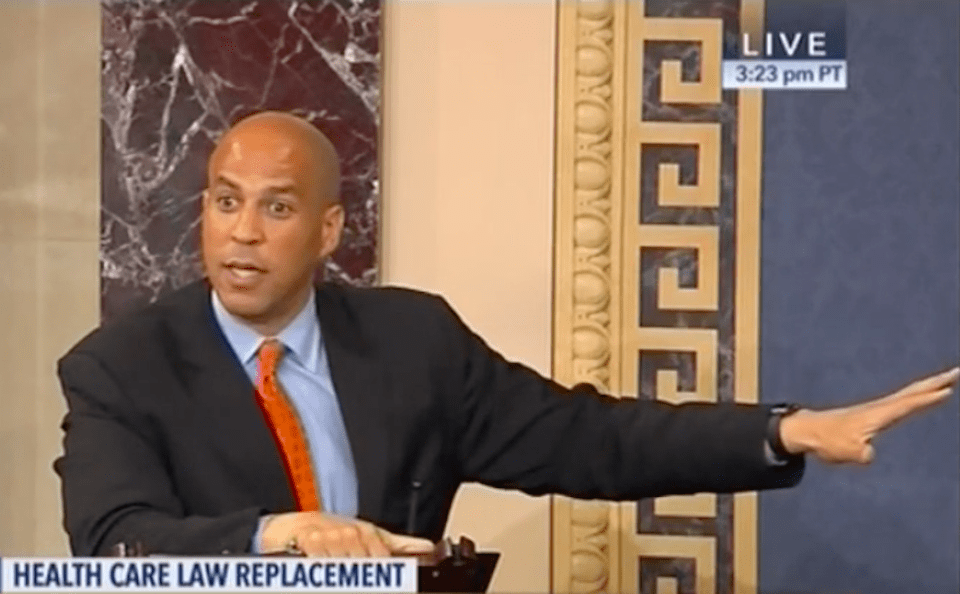 As Senate Democrats hold the floor against the Republicans' health care repeal bill, Sen. Cory Booker called out the GOP's scheme as "an insult to our values."

Senate Republicans appear to still be dead set on forcing through their secretive health care bill, despite vocal and fervent opposition.

Americans across the country disapprove of the GOP's plan, which Republican leadership is trying to jam through without involvement by or hearings with Democrats, and without even the input of women from their own party.

Not one single Republican lawmaker can even confirm that an actual bill exists.

This is a ludicrous and dangerous situation, and Senate Democrats are ready and willing to use every tool they have to expose the GOP's cravenness.

And as Democratic Sen. Cory Booker of New Jersey elucidated in his powerful speech on the floor, Senate Republicans are not only being cowardly by trying to hide the damage this bill would do from the Americans who would bear the brunt of it. They are also violating the long-standing values of the very body to which they belong, and which they ostensibly hold in high esteem.

Booker noted that a lot of the frustration with the GOP's plan is not merely with the bill itself, but with "the brokenness of this process," which has been "conducted behind closed doors, in back rooms." And he pointed out that, contrary to the usual insistence on the need for "regular order," now it appears that the concern for order has faded in favor of a desire to find any way possible to give more tax breaks to the wealthy, despite the harm it will do to so many others.

Booker passionately challenged his Republican colleagues to remember "what this republic [was] founded upon."

But what is interesting, if you look at the history of the body, the longest debate — consecutive session debate, was about war and whether to arm merchant ships in the first world war. What was the second longest debate? The second longest consecutive session in Senate history? It was actually health care. Or more specifically, it was the health care debate in 2010 about the Affordable Care Act or so-called Obamacare.

In fact, here we are, looking at a process that seems to be screaming something to the floor — no hearings, no markups, no committee sessions — screaming to the floor in the shadow of the second longest consecutive session to debate. That to me is a contrast that speaks volumes about the wrongness of this moment in history, that anyone objectively standing back would agree and concur that for something that is so deeply at the core of what our country is about — we literally founded this nation because of life, liberty, and the pursuit of happiness. Life!

And what more fundamental aspect of life is there? A critical constituent part of that has to be how we preserve life, how we embolden life, what is the state of our health care? And for this great historic, deliberative body to be doing that without so much as a pause, with the brilliant minds on both sides of this aisle, with the thoughtful people on both sides of this aisle — people who have come through portals and processes where they expose themselves and their lives to public discussion, public debate — that's what a democracy is. That's what this republic is founded upon. Not secrecy, not back rooms.

This body reflects the best of what democratic principles are. And now we're rushing something through that fundamentally affects life, and we're pushing it to the floor with an insult to our history and an insult to our values.

If Republicans cannot be moved by the pleas of their own constituents, by the fear and turmoil their repeal plan is causing among millions of Americans, perhaps the reminder from their colleague about the principles they purport to hold as Senators will be a wake-up call.

It does no honor to the Senate as an institution to trample upon its centuries-old values in order to add another tally mark to the win column. One would hope Republican leadership will not just hear Booker's words, but will truly listen, and remember what it is they were elected to do, and the ideals of the body they are supposed to represent.