Home National Sen. Cory Booker tried to warn us about the damage Betsy DeVos...
Progressive journalism is under attack. Please help us fight back!
DONATE 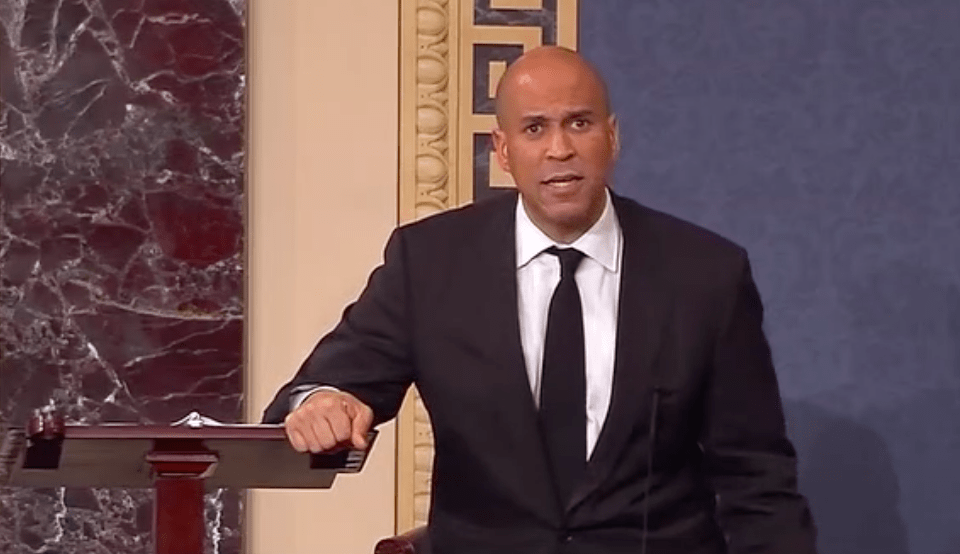 Sen. Cory Booker
Get The American Independent in your inbox

Secretary of Education Betsy DeVos brought little relevant knowledge or experience to her new job, but she did bring a marked disinterest in protecting the fundamental civil rights of students across the country, as Senator Cory Booker warned in his impassioned floor speech against her nomination.

When Donald Trump nominated Betsy DeVos as his Secretary of Education, it was immediately clear that her main qualification, in the administration's view, was her willingness to help them all but destroy the department entirely.

Her lack of readiness for the actual work the job entails was made even more evident during her confirmation hearings, at which she was grilled by Senator Al Franken (D-MN) on her utter dearth of understanding of key topics in the education field, and by Senator Bob Casey (D-PA) about her lack of support for Title IX protections, particularly on the subject of campus sexual assault.

But despite fervent questioning by Democrats, and their efforts to "hold the floor" in an attempt to thwart her confirmation, DeVos became another Trump cabinet member who is appallingly inadequate for the work with which her department is tasked.

And her pick to head the department's Office of Civil Rights is just as ill-equipped — and thus, sadly, an unsurprising choice.

Candice Jackson, an attorney with limited experience in civil rights' law — but with a long history of hostility to issues of social justice like feminism and racial equality in schools — will be the deputy assistant secretary of the office, and will serve as the acting assistant secretary until the position is filled.

In addition to her writings against equality, compulsory education, and the Civil Rights Act of 1964, Jackson also brings a personal tale of fabricated woe to her new position:

As an undergraduate studying calculus at Stanford University in the mid-1990s, Candice Jackson "gravitated" toward a section of the class that provided students with extra help on challenging problems, she wrote in a student publication. Then she learned that the section was reserved for minority students.

"I am especially disappointed that the University encourages these and other discriminatory programs," she wrote in the Stanford Review. "We need to allow each person to define his or her own achievements instead of assuming competence or incompetence based on race."

That this is the person DeVos deems fit to oversee students' civil rights is extremely troubling. And it is precisely this kind of move about which Senator Cory Booker (D-NJ) so fervently tried to warn us in his floor speech against DeVos' nomination back in February.

Booker was emphatic about the critical role the Education Department has in protecting all students from discrimination and harassment based on their identity, and about the damage that could be done to students of all ages and from all parts of the country if the government ceases to see civil rights as a crucial area to defend.

I hung a picture in front of my office. I come out of my office into where my assistant sits, and the first thing I see, (pauses) the first thing I see on the wall in front of me is a Norman Rockwell painting. This little girl — God, her courage — this little girl named Ruby. Ruby Bridges. And there are these white men surrounding her, walking just as tall, and they're escorting that girl to school. And there's clearly hate swirling around. You look at that picture and you can feel it. But I don't care what your background, what your religion — you look at Norman Rockwell's painting, as I made sure I do every day that I leave my office as a United States Senator, I see that picture and I am reminded that sometimes, the most vulnerable child needs a little help, not just from a loving teacher or a loving parent, but that there is a government that stands behind her and says: 'You matter.'

And our country has come so far. There's so much love, so much more recognition of the dignity of all children. But come on, we're not there yet!

There's a child, I think, that wonders — right now, somewhere in America — is wondering if this country will prove itself true to them. They're probably enduring some things I never had to endure. They're probably worried about their safety. They're probably being put in a situation where they're questioning their worth. They probably feel alone and isolated.

My prayer is that that child knows that even though it ain't perfect, and it won't be easy, that that child somehow knows that they're not alone, that there will be people fighting for them. Because I was taught, in the words of a great poet: "There's a dream in this land, with its back against the wall; to save the dream for one, we must save it for all."

May the Office for Civil Rights, in the years to come, remain vigilant, remain strong, remain expansive in their efforts. But I have no confidence it will do so under this person.

Booker voiced these grave concerns about DeVos, but with Jackson now alongside her — bringing more hard-heartedness, narrow-minded thinking, and the absurd idea that it is the racial majority who are actually suffering — his warning has proven even more prophetic than it seemed at the time.

DeVos, Jackson, and Trump may not actually demolish the Department of Education altogether. But they can certainly strip it of any impetus to do good works, to do right by students who are most in need of a champion, and to leave it a shell of what it had once been.

Booker's poignant speech was a call to action in February, and it must continue to be so as the dismantling of this department looms near.