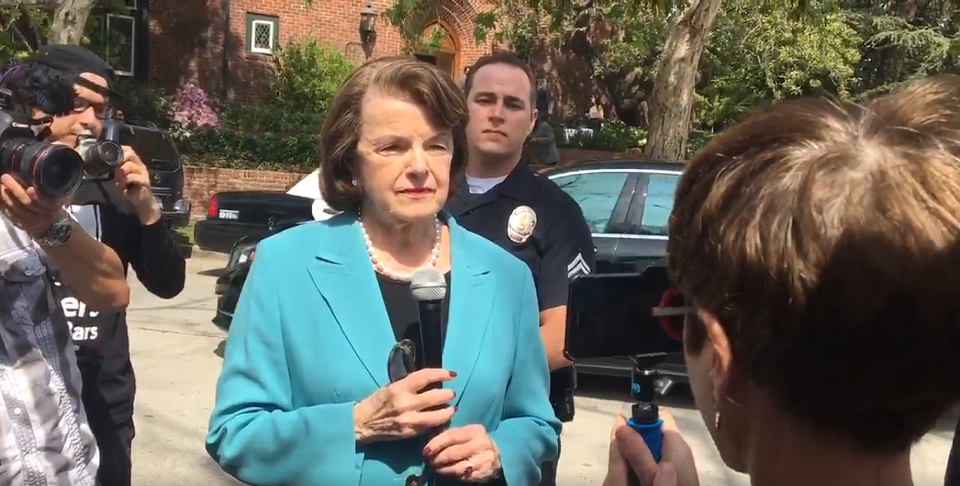 Javier Panzar via Twitter
Get The American Independent in your inbox

Senator Dianne Feinstein took some time to speak with protesters outside a fundraiser, and offered some succinct thoughts on the viability of Donald Trump's presidency.

Senator Dianne Feinstein (D-CA) was at a fundraiser in Los Angeles for a potential 2018 reelection campaign, where various groups of protesters had gathered, calling for a town hall with the senator to seek answers on a number of issues centered around Donald Trump and the possibility of his removal from office.

As Shareblue recently reported, Feinstein, the Ranking Member of the Senate Judiciary Committee, was noticeably shaken after a meeting with FBI Director James Comey on the increasing questions surrounding the Trump administration's ties to Russia.

She could not at that time offer any specifics, only noting that the meeting covered "sensitive matters and highly classified" information that she could not "answer any questions about."

And though that need for discretion still stood, Feinstein did take the time to speak with the protesters upon leaving her fundraiser. And she was as direct as she could be on the issue of Trump's viability.

QUESTION: You just looked white as a ghost yesterday when you came out of that meeting. And we don't know what's happening. But we know that he is breaking laws everyday. He's making money on Mar-a-Lago. He's getting copyrights in China. He has obvious dealings with Russia. The Dakota pipeline. There's so many things he is doing that are unconstitutional. How are we gonna get him out? That's what I want to know.

FEINSTEIN: Well, we have a lot of people working at this. Technical people. And I think he's gonna get himself out. I think sending sons to another country to make a financial deal for his company and then have that covered with government expenses — I think those government expenses should not be allowed.

Feinstein offered further explanation of what would need to take place on the road toward possible impeachment, and also talked candidly about her observations of this presidency, noting that, after her long career in politics, "I've never seen anything like this."

QUESTION: So is that what we should focus on to get him out?

FEINSTEIN: Let me finish. We are working on a bill that will do that now. We're working on a couple of bills that would deal with conflict of interest. It's difficult because this is a field that relates to some extent to the Emoluments Clause of the Constitution. And there's no preceding legislation to do this. But we've got good people looking at it. And we're going to some of the ethicists along the line.

QUESTION: Do you believe we're facing the biggest challenge and threat to our Constitution, our Republic and our democracy right now? Is this the most important year or two of your career in government?

FEINSTEIN: Well, it's the most troubling. I've been doing what I do for a long time and I've never seen anything like this. I've never seen a president that can make a comment that's dead wrong, and he hangs onto the comment. I've never seen a president saying about his opponent "lock her up, lock her up." That was kind of the beginning for me that I understood that we were dealing with a totally different phenomenon here. And I think we have to be aware of that. And be smart. And watch. And make our notes. And do our bills. And then we'll see what happens.

For someone whose political career goes back nearly five decades, it is chillingly notable that Feinstein is as unnerved as she is by the words and actions of Trump and his team.

But it is also promising that someone with her stature in Congress is on the record with those worries, and with her commitment to keep a close eye and expert minds on what can be done to protect the nation from this administration.