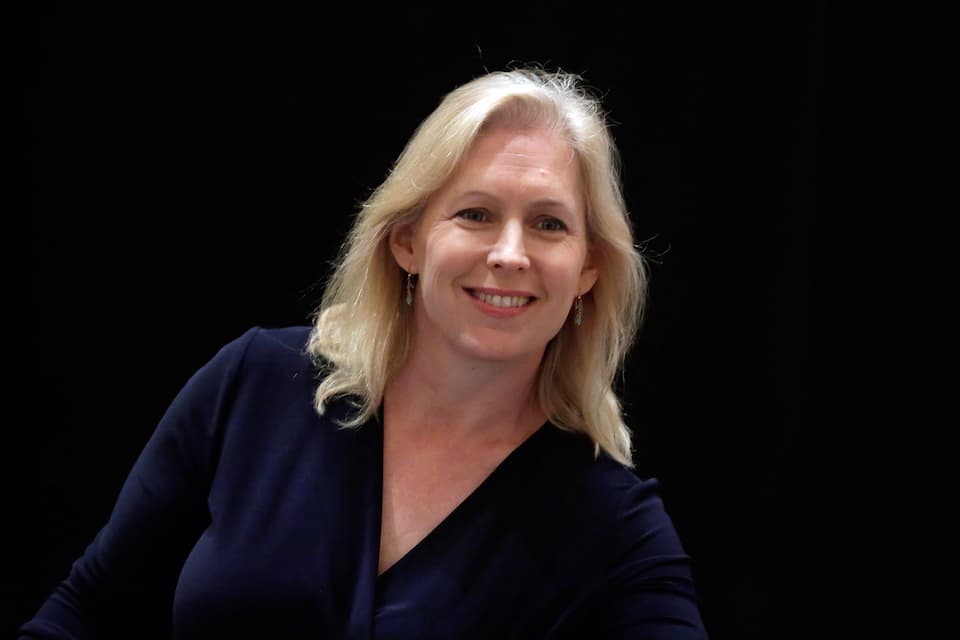 Senator Kirsten Gillibrand is a tireless fighter for the causes she believes in, for women in politics, and for the American people. And in a new profile at New York Magazine, she minced no words about her motivation.

And in the Donald Trump era, Gillibrand is proving to be one of his loudest and staunchest opponents in Congress.

In a lengthy profile by Rebecca Traister for New York Magazine — pointedly headlined "Kirsten Gillibrand is an Enthusiastic NO" — Gillibrand's rebukes to Trump himself and to his agenda are front and center. She has cast the most "no" votes of any Senator against Trump's cabinet nominees, telling Traister succinctly, "If they suck, I vote against them." And she supports the Democrats' planned filibuster against Trump's nominee for the stolen Supreme Court seat.

But she has always been willing to work with her Republican colleagues on any issue where common ground can be found, and that has not disappeared under this administration; if anything, it has amplified, because resistance must be harnessed in every way possible.

And Gillibrand was not shy about voicing her motivation:

In early March, [Maine Republican Senator Susan] Collins and Gillibrand filed legislation to protect seniors against fraud, and Gillibrand hopes to persuade Collins to become a Republican co-sponsor of the Family Act, Gillibrand's big paid-family-leave bill. "I know Susan's worldview is similar to my worldview," says Gillibrand. "Which is that we're here to help people, and if we're not helping people, we should go the fuck home."

The biggest problem in Washington, Gillibrand tells me later, "is that not enough people have enough empathy. They can't put themselves in someone else's shoes. If they've lived an affluent life, they can't imagine how expensive day care is. They don't know why paid leave is important. They just don't see it."

And as part of her determined ambition to change that reality, Gillibrand also focuses heavily on helping other women enter the political arena, noting that if Congress was truly representative, gender-wise, of the nation, "You would have different issues raised, different solutions being offered, you'd have less partisan bickering."

The loss in the November election was "not okay" but it did not leave Gillibrand feeling hopeless — she points to the Women's Marches as evidence that women were not scared away by Trump's election, but rather have been energized and, like her, are ready to make their voices heard in opposition to the new administration.

And she is putting her money where her mouth is:

Through her fund-raising and Off the Sidelines PAC, Gillibrand has raised close to $6 million for women candidates in the past five years. "I will help you run," she tells a young woman who says she's thinking of entering politics at a recent event at the Manhattan women's club, the Wing. "It doesn't matter if you haven't worked your way up. The guys run every time. I can't tell you how many 30-year-old dudes believe they should be senator or president. Women, we're like, 'Well, maybe after ten years of working …' No. Just run for the office you want to run for and run on the issue you want to fix."

Gillibrand herself has remained noncommittal regarding calls that she run for President in 2020, noting that she is running for Senate reelection in 2018 and not thinking beyond that at the moment. But as her resistance to Trump continues, and as voters see someone who admires them as much as they admire her — someone who clearly states that it is the grassroots leading the charge, that the "message is coming from regular people, and no one is telling them what to do." — she will surely remain on the radar as one who could ensure the Trump administration is set down in history books as a one-term failure.

And whatever her future plans may be, they most definitely do not include "going the fuck home."