Home National Sen. Kamala Harris: 'When we use our voices, we've got the power.'
Support progressive journalism.
Donate today 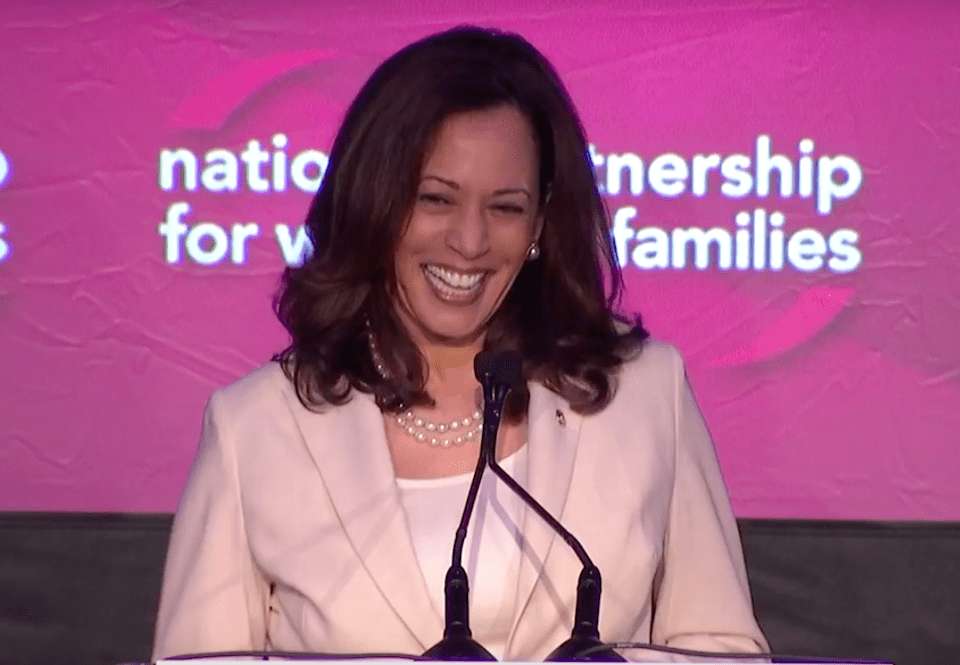 NPWF
Get The American Independent in your inbox

Speaking to the National Partnership for Women and Families, Sen. Kamala Harris channeled her trailblazing predecessor, Rep. Shirley Chisholm: "If they don’t give you a seat at the table, bring a folding chair."

Sen. Kamala Harris has had a lot to contend with in recent days.

And both times, Harris' white male Republican colleagues made their lack of respect for her starkly evident, gaveling her down as she tried to speak and admonishing her to be nicer and show more "courtesy" — for simply doing her job the same way as the male senators.

But men can label Harris as "hysterical" all they want. It will not work to silence her.

Because, as she told the audience at the National Partnership for Women and Families gala, "When we use our voices, we've got the power."

Harris highlighted the NPWF's work over the past 46 years supporting reproductive rights, family leave, and access to health care. But she cautiously noted that, alongside the progress the country has made, "We also recognize this is an incredibly challenging moment in our history."

And in a poignant moment, she recalled the encouraging words of the trailblazing Rep. Shirley Chisholm, the first Black woman to serve in Congress and to run for a major party's presidential nomination.

But while we celebrate the progress we have seen, we also of course recognize this is an incredibly challenging moment in our history.

And it is an interesting time, I must say, in particular, to be in Washington, D.C.

And certainly these Senate committee hearings have stressed to me how important it is that we continue to make our voices heard.

And it has stressed how important it is to live those wise words of the great Congresswoman Shirley Chisholm, who said, 'If they don’t give you a seat at the table, bring a folding chair.' [applause]

In that vein of speaking up against all obstacles, Harris went on to call out Donald Trump for the cruel cuts his proposed budget would inflict on millions of vulnerable Americans, which bestows massive tax cuts on the wealthy while giving mere pennies to those on the other end of the income scale.

She ripped conservatives for "[playing] politics with public health" in regard to reproductive rights and their disastrous, secret plan to repeal the Affordable Care Act.

And she made the crucial observation that we must reject "the false choice presented by our politics that you have to choose between caring about economic issues or caring about 'women’s issues.' You cannot separate them. They’re inextricably linked."

Harris spoke about the everyday Americans who would be helped by policies promoting economic justice, such as a $15 minimum wage and debt-free college education, particularly women who have been left behind in the past. "Because when you lift up women, you lift up families, you lift up communities, you lift up economies—and you lift up America."

She cheered on the younger generation, including her stepdaughter who just graduated high school, praising them for having "the courage of these convictions" and encouraging them to "build a world where all of our daughters — and all of our sons — have every opportunity to succeed and thrive, so that our great country can succeed and thrive."

Clearly, Harris has not let the rude admonishments from her male colleagues dampen her enthusiasm or sap her energy in the fight against those who seek to halt, or even reverse, the vital progress the nation has made on so many fronts.

And she is modeling for millions of people the power of their voices.