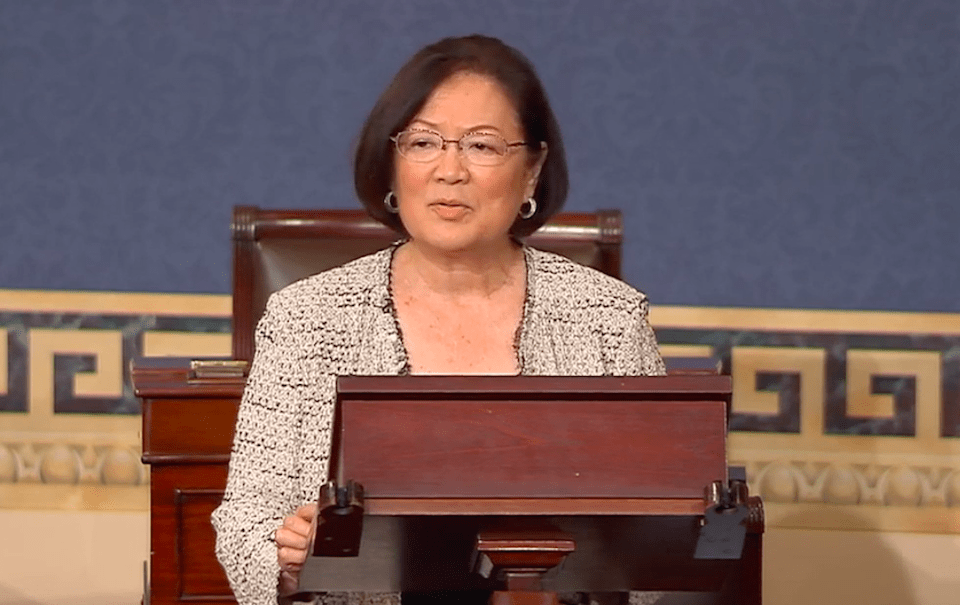 Hawaii Democratic Sen. Mazie Hirono won't let anything keep her away from the fight to protect health care coverage — not even her cancer treatments.

As Senate Republicans continue to barrel ahead with their rushed and reckless health care repeal bill, their Democratic colleagues continue to sound the alarm about the dangers of the plan, and the need to fight back.

And one Democratic lawmaker in particular has made it clear she will let nothing keep her from joining that fight.

Sen. Mazie Hirono of Hawaii took to the floor with other Democrats to call out the GOP's "mean, ugly bill."

"The stakes are too high to stay silent," Hirono noted.

And to further prove her dedication to protecting health care for the American people, she declared that she'd be back to keep speaking out — as soon as she was finished receiving treatment for the kidney cancer she was diagnosed with two months ago.

I'll be back ASAP to keep up the fight against #Trumpcare. The stakes are too high to stay silent & we need you to continue speaking out. pic.twitter.com/nbMYGkgun9

Tomorrow, I'm going in for surgery to remove the lesion I have on my rib. But I'm going to be back as quickly as I can to keep up the fight against this mean, ugly bill. The stakes are too high to stay silent. We need everyone in this fight, because we're all in it together.

Millions of people across the country are mobilizing against Trumpcare because health care is personal. I'm encouraged that so many people have been calling all of us and making their voices heard. The majority leader and Donald Trump can try to jam this bill down our throats, but we aren't going to let them succeed, and we are going to hold them accountable. The fight continues.

Health care is indeed personal, and it is something with which each and every person must be concerned and involved. As Hirono noted, "We are all one diagnosis away from having a serious illness."

Remarking on the fact that she is fortunate to have quality health insurance, and could receive whatever treatments she needed for her cancer, Hirono pointed out that no one should have to face a difficult illness without that certainty.

"No one should have to worry about whether they can afford the health care that one day might save their life," she declared.

Hirono is right. The latest analysis from the nonpartisan Congressional Budget Office shows that the GOP's repeal plan would cause 22 million people to lose their insurance, cutting $772 billion dollars from Medicaid — but bestowing $541 billion in tax cuts on the wealthiest Americans.

This is what Donald Trump and his Republican Party are callously and stubbornly trying to force on the country, against widespread opposition.

But Democrats will not sit idly by or let GOP talking points cow them into going along with the disastrous plan. And lawmakers like Hirono, who won't even let cancer treatments slow down her resistance, are helping to lead the way. SaveSave