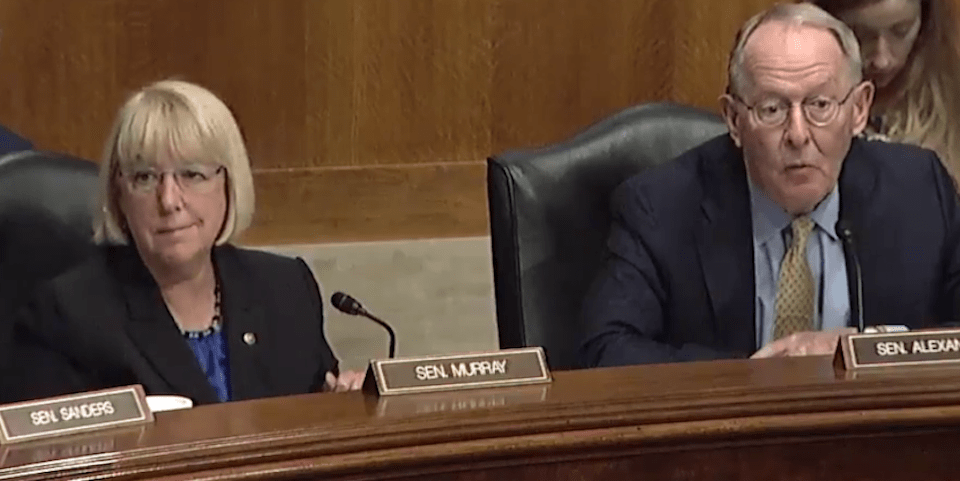 Senate Republicans once again reveal their contempt for women challenging them on tough issues.

Senate Republicans are continuing to negotiate their health care repeal in complete secrecy, behind closed doors, with no amendments and no Democratic input.

From the outset, the GOP working group was also criticized for including 13 men and no women. Increasingly, their exclusion of women does not seem like an accident, given the way women in the Senate are treated when they try to raise objections.

In a meeting of the Senate Committee on Health, Education, Labor, and Pensions, Sen. Patty Murray (D-WA) tried to demand a public hearing on the Senate health care repeal bill. She was summarily denied by Chairman Lamar Alexander (R-TN):

MURRAY: You haven't yet scheduled a hearing on the Republican "Trumpcare" bill. I know you're part of the discussion. You know what's in it, we have no idea. We haven't seen it. The people we represent don't have any idea. Senator McCaskill raised this at a hearing, powerfully, last week and I want to raise it here too. Do you intend to have any hearings before the bill comes to the floor?

ALEXANDER: I have none planned, Senator Murray.

Alexander then proceeded to spend the next two minutes scolding Murray for supposedly going off topic, claiming he had no interest in a bipartisan hearing on Obamacare repeal because he already held one several months ago — before passage of the House bill — and Democrats "did very poorly" at that hearing.

Murray was not deterred, and tried to reiterate her point, only to be cut off:

MURRAY: Mr. Chairman, I appreciate that you're having this hearing. But I also would very much appreciate that we have a hearing on a bill that we are going to see that our folks have not seen, people across the country haven't seen. When we passed the ACA, we had 57 bipartisan HELP committee hearings and meetings and round tables. So I will just say that is disconcerting—

ALEXANDER: You passed the ACA in the middle of a snowstorm with 60 votes and crammed it down the throats of Republicans. If you want to talk about that we can, but today we're talking about drug pricing.

Notably, Alexander did not at any point make an attempt to justify why nobody has a right to see the Republican health care bill. Nor did he address Murray's point that the Democrats who passed Obamacare held months of bipartisan public meetings and let Republicans amend the bill. He simply silenced her and plowed on.

This is not an isolated incident. Women in the Senate are increasingly seeing a hostile environment where Republican male colleagues shut them down for speaking their mind.

Sen. Elizabeth Warren (D-MA) was censured by Republican Leader Mitch McConnell for trying to read Coretta Scott King's criticisms of Attorney General Jeff Sessions at a confirmation hearing, even after male senators were allowed to read the same letter.

And earlier this week, at Sessions's public testimony on Russia, multiple Republicans cut off Sen. Kamala Harris (D-CA) as she tried to pursue her line of questioning, for supposedly making Sessions "nervous." Republican pundits later tried to claim that Harris — a former prosecutor and attorney general who has spent her whole career interrogating people — was "hysterical" for asking questions.

The behavior of the GOP over the last several months makes it crystal clear they do not value or want public accountability for their actions. But among those who have called them out for it, they appear to have a special contempt for women.

Republicans cannot take seriously the opinions of the American people if they are not willing to let half of the population even speak.