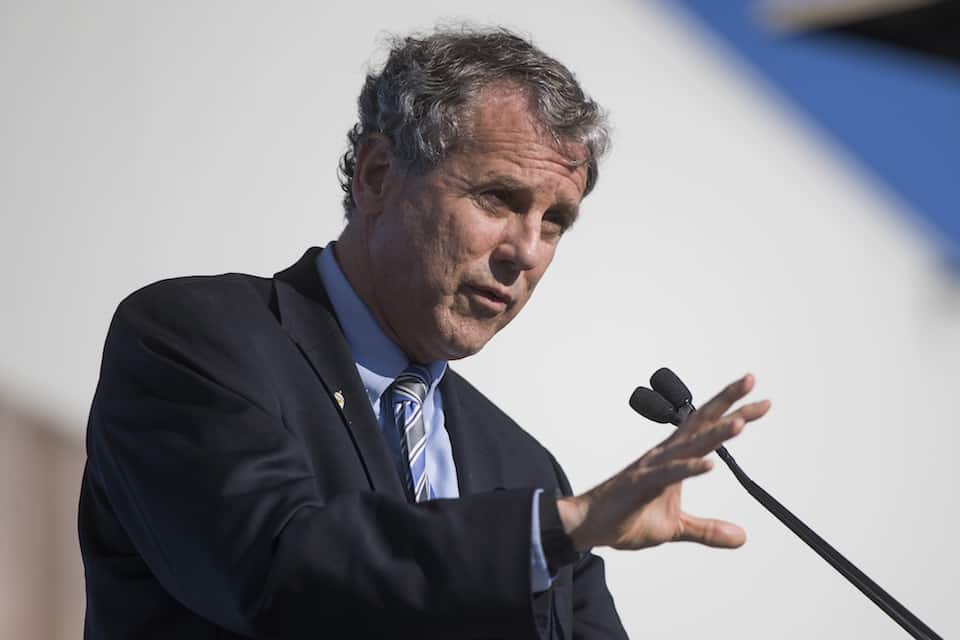 Donald Trump and congressional Republicans have worked to sabotage the health care markets, leading Anthem to pull out of Ohio's health exchange. Now, they're trying to blame Democrats, but Sen. Sherrod Brown won't let them get away with it.

Anthem Blue Cross and Blue Shield will pull out of the health exchange set up in Ohio by the Affordable Care Act, leaving 18 counties in that state without an insurance option and hurting about 10,500 people.

In a statement to the Dayton Daily News, the company directly blamed the Trump administration and congressional Republicans for its decision: "Today, planning and pricing for ACA-compliant health plans has become increasingly difficult due to the shrinking individual market as well as continual changes in federal operations, rules and guidance."

Anthem cited "the lack of certainty of funding for cost sharing reduction subsidies" and "an increasing lack of overall predictability" as factors that contributed to their decision. The company had previously warned that such a move could come, as Republicans continued to play games with health care.

Donald Trump has repeatedly threatened to halt payment on the subsidies that insurance companies rely on, as part of his attempt to defund Obamacare and push it towards collapse. The Center on Budget and Policy Priorities took note of this Republican sabotage, noting, "By refusing to include a measure guaranteeing the continued payment of the Affordable Care Act’s (ACA) cost-sharing reductions (CSRs) in the new fiscal year 2017 spending bill, the Administration and congressional Republican leaders have endangered health coverage for millions of Americans."

The Center determined that Republicans "will bear responsibility for the premium increases, marketplace disruption, and coverage losses that will likely result."

In its reporting, The Daily News went on to note, "The company was referring to the uncertainty surrounding President Donald Trump’s-endorsed GOP plan to replace Obamacare, which has led several other major insurers to pull out of exchanges in other states."

Ohio Democratic Senator Sherrod Brown took note of the cause and effect of Trump's approach, calling the Republicans out in a statement: "The dangerous game President Trump and Washington politicians are playing just caused 70,000 paying customers in Ohio to lose their insurance and it will continue raising prices for everyone else. It’s got to stop."

He added, "Instead of using working families as bargaining chips and driving up prices across the market, we need to work together to lower costs and make healthcare work better for everyone."

Ohio Democratic Party Chairman David Pepper also released a pointed statement: "There is no debate -- the Trump administration’s policies are directly responsible for the mess Ohio families now face." Pepper singled out Ohio Republicans Rep. Josh Mandel (who is running for Senate) and Rep. Jim Renacci (running for governor) for failing "to show independence from an administration that regards Ohioans as props in their political theatre."

But Republicans are continuing to exploit the situation they themselves created, while trying to blame it on the ACA. House Speaker Paul Ryan cited the closure as evidence of "the collapse" of Obamacare, and used it to promote his party's repeal plan.

And independent fact checkers have repeatedly debunked the allegation from Ryan and others that Obamacare is collapsing and in a "death spiral," as has the nonpartisan Congressional Budget Office (CBO).

The Republican bill would kick 23 million people off of their health insurance, while reintroducing measures like denying coverage to those with pre-existing conditions or charging them exorbitant rates now prohibited by the law. Resistance to the bill has had Republicans across the country on the defense and running scared, doing everything they can to avoid contact with constituents who are angry at what they are proposing.

Senate Republicans are currently in a state of paralysis, fearful of the unpopular provisions of the House bill, but unable to bring together the votes for a bill of their own making.

Millions of Americans are now covered thanks to the law passed solely by Democrats in Congress and signed into law by former President Barack Obama. Instead of offering legislation to ensure coverage for even more people, Republicans are committing sabotage and blaming Democrats for something they didn't do.