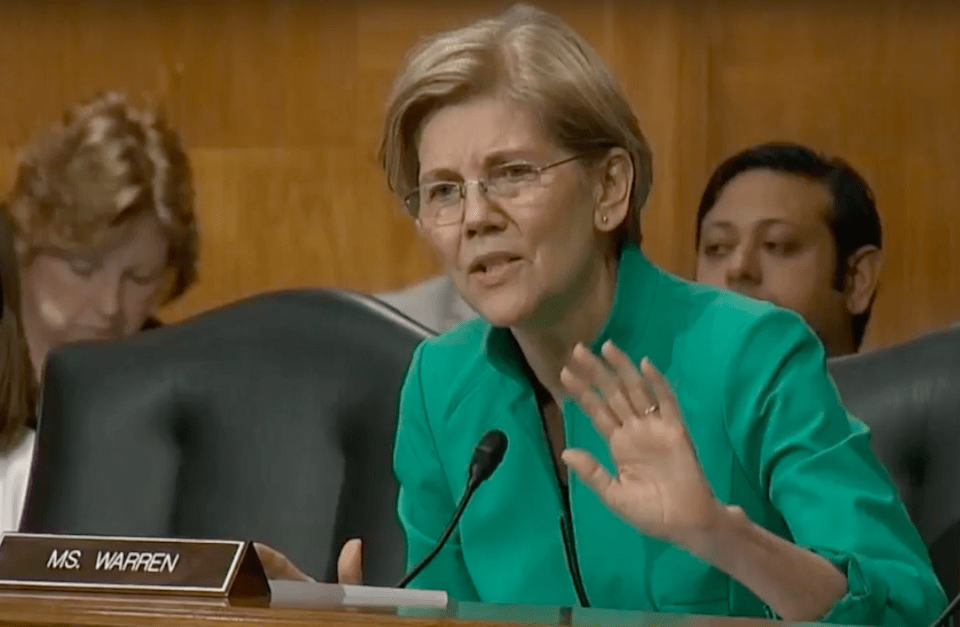 C-S
Get The American Independent in your inbox

Senator Elizabeth Warren (D-MA) eviscerated Treasury Secretary Steve Mnuchin for reversing himself on a key promise to support a rule that would prevent another financial crisis.

In one particularly sharp exchange, Senator Elizabeth Warren (D-MA) hammered Mnuchin for claiming to support a particular regulation, while simultaneously opposing the exact thing that regulation is meant to do.

At issue was the "21st Century Glass-Steagall Act," which would separate traditional banks from riskier investment banks. Warren noted that "The president and this administration have said repeatedly that they support a 21st Century Glass-Steagall," pointing out that it was even included in the Republican Party's platform. And she noted that Mnuchin himself spoke of the need for the bill during his confirmation hearings.

But after hearing Mnuchin reverse himself on the topic, Warren asked if exposure to bank CEOs and lobbyists had been responsible for the change of mind. Mnuchin tried to explain that there was no reversal, but Warren stopped him dead in his tracks:

WARREN: The president and this administration have said repeatedly that they support a 21st Century Glass-Steagall. It was in the Republican party platform, Donald Trump said it specifically a few weeks before the election. You said, quote, 'We need a 21st Century Glass-Steagall' at your confirmation hearing. And now you've just said exactly the opposite. You know, in the past few months, you and the president have had a number of meetings with big bank CEOs and lobbyists. Is that the reason for the reversal on Glass-Steagall?

MNUCHIN: No, not at all, there actually wasn't a reversal, so —

MNUCHIN: No, let me just explain. So, the Republican platform did have Glass-Steagall. We, during the campaign — and I had the opportunity to work with the president on this — specifically came out and said we do support a 21st Century Glass-Steagall.

MNUCHIN: Which is — that means that there are aspects of it, okay, that we think may make sense, but we never said before that we supported a full separation of banks and investment banks —

MNUCHIN: — if we had said that, we would have —

WARREN: Let me stop you right there, Mr. Secretary.

MNUCHIN: You're not letting me finish?

WARREN: Yeah, I'm not, because I really have to understand what you've just said. There are aspects of Glass-Steagall that you support, but not breaking up the banks, and separating commercial banking from investment banking? What do you think Glass-Steagall was, if that's not right at the heart of it?

Mnuchin went on to explain, incredibly, that at the time of his confirmation hearing, he wasn't aware that "21st Century Glass-Steagall Act" was the name of an actual bill. Warren called out that dodge by asking Mnuchin what else those words could possibly mean:

WARREN: Yes, and has been for three years now.

MNUCHIN: I apologize that I was not aware of that. So, we were —

WARREN: But I still haven't heard the answer to my question. What do you think Glass-Steagall was, if it wasn't separating commercial banking from investment banking — uh, from ordinary banking?

MNUCHIN: Again, the fundamental part of Glass-Steagall was, as you've just outlined, in the separation of investment banking from commercial banking, because people were concerned about conflict —

WARREN: How do you separate without breaking up the big banks that have integrated these two things?

MNUCHIN: Uh, again, the integration of commercial banking and investment banks has gone on for a long of period time. That is not what caused the problems during the financial crisis, and if we did go back to a full separation, you would have an enormous impact on liquidity and lending to small and medium-sized businesses —

WARREN: So, let me get this straight, let me get this straight: You're saying that you are in favor of Glass-Steagall, which breaks apart the two arms of banking — regular banking and commercial banking — except you don't want to break apart the two parts of banking? This is like something straight out of George Orwell. You're saying simultaneously you're in favor of breaking up the banks, that's what Glass-Steagall is —

MNUCHIN: I've never said we're in favor of breaking up the banks and separating — if we had, it would have been very simple —

WARREN: We're going to run out of time here, but I have to try this one more time. What does it mean to be in favor of 21st Century Glass-Steagall, if it does not mean breaking apart these two functions in banking?

MNUCHIN: You know what, I'd be more than happy to come see you and follow up, and talk about this —

WARREN: Just tell me what it means —

MNUCHIN: We, we never came out and said we should separate banks from investments —

WARREN: Tell me what it means. Tell me what 21st Century Glass-Steagall means if it doesn't mean breaking apart those two functions. It's an easy question. Or an impossible question.

MNUCHIN: It's actually a complicated question.

MNUCHIN: There's many aspects of it, okay? The simple answer, which we don't support, is breaking up banks from investment banks. We think that would be a huge mistake. But again, I'm more than happy to listen to your ideas on it, you obviously have strong views and I'd be happy to follow up and listen to you.

WARREN: This is just bizarre. The idea that you can say we are in favor of Glass-Steagall but not breaking up the banks.

WARREN: We are in — we are in favor of a bill that is called breaking up the banks, only don't break up the banks. Thank you, Mr. Chairman. This is — this is crazy.

And Warren's grilling of Mnuchin is yet another strong reminder that Trump's promise to "drain the swamp" and look out for "working people" was more than just a lie — it was the exact opposite of what he actually intended to do.

Trump's agenda will transfer more wealth to the top one percent, and leave taxpayers on the hook for the next financial crash that his policies may bring about. But Democrats like Warren are committed to preventing that from happening.