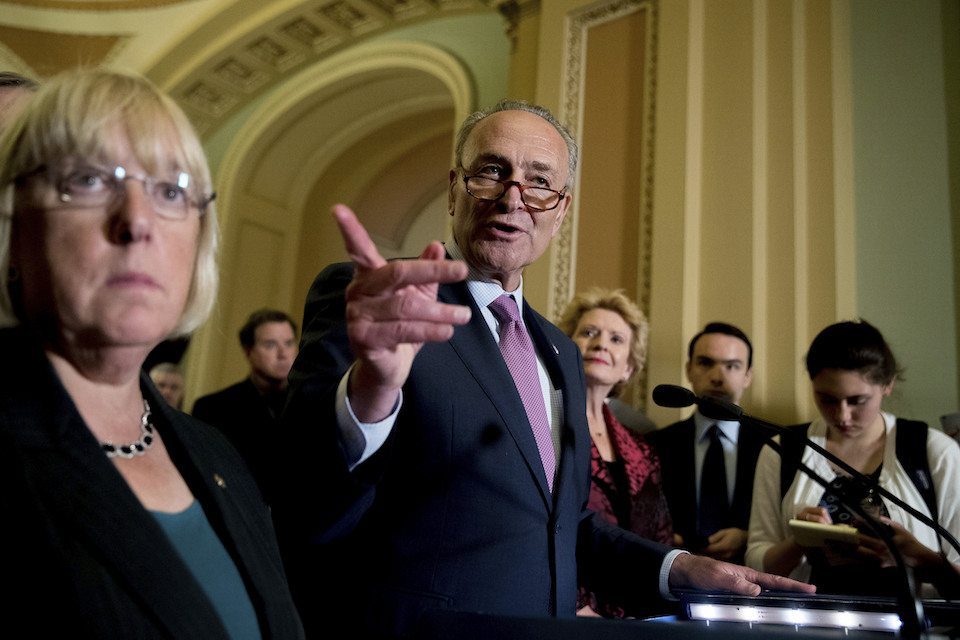 Senate Republican Leader Mitch McConnell's latest health care ploy is to convince everyone that as bad as the GOP bill is, compromising with Democrats would be worse. Senate Democrats called his bluff and proved they are in fact the only ones with ideas to fix the health care system.

The future of the Senate Obamacare repeal bill is in grave jeopardy.

Republicans hoped that by writing their bill in secret, they could blunt the political backlash against stripping health insurance from 22 million people and cutting hundreds of billions from Medicaid, but their strategy backfired.

Faced with intense public opposition and an increasing number of GOP defections, Republican leadership is desperately trying to rally their caucus.

Lately, Senate Majority Leader Mitch McConnell has been trying to scare his GOP colleagues back into compliance by warning them, behind closed doors, that if they cannot pass the bill, they will have no choice but to work with Democrats.

McConnell's obvious implication is that bipartisanship would be deleterious to the careers of Senate Republicans. But whether or not this is true, it would be terrific news for the American people.

On Monday, Democrats called McConnell's bluff and said that they would love to work with him:

Schumer to McConnell: You threatened to work with Dems on health care? Let's do it. pic.twitter.com/PTcqP04Ixa

A letter to McConnell, signed by Minority Leader Chuck Schumer, Dick Durbin, Patty Murray, and Debbie Stabenow, reminds the Republican Senate leader of all the Democratic proposals to fix health care that are available for his consideration if he really wants to work with them.

Democratic proposals cited in the letter include the Marketplace Certainty Act, which would restore the payments to insurers that Republicans blocked; the Individual Health Insurance Marketplace Improvement Act, which would create a reinsurance program to reduce risk in markets where insurers set premiums too low; the Health Care Options for All Act, which would let people enroll in the same plans as Congress if there is no insurer operating in their county; and a proposal by Sen. Heidi Heitkamp (D-ND) to restructure health subsidies for people at 400 percent of the federal poverty line.

The letter concludes: "We stand ready to work on these and other reforms to the current system and urge you to join us in advancing measures that would have an immediate impact on improving the health care system for American families."

And these are by no means the only ideas Democrats have proposed for health care reform. Over 100 Democrats in the House have cosponsored a single payer bill by Michigan Rep. John Conyers.

Meanwhile, at the state level, Nevada Democrats recently passed a bill to let people in their insurance exchange buy into Medicaid — which was defeated only by the veto of a Republican governor.

Republicans have spent the last several months completely shutting Democrats out of the health care debate, and they are now paying the price. It is time for the GOP to stop scheming up ways to bypass legislative consensus, and start thinking of how to actually serve the people.

When they are ready to do so, Democrats will be waiting with a list of real ideas.