Home National Senate Democrats will not be going along quietly under a Trump administration
Support progressive journalism.
Donate today 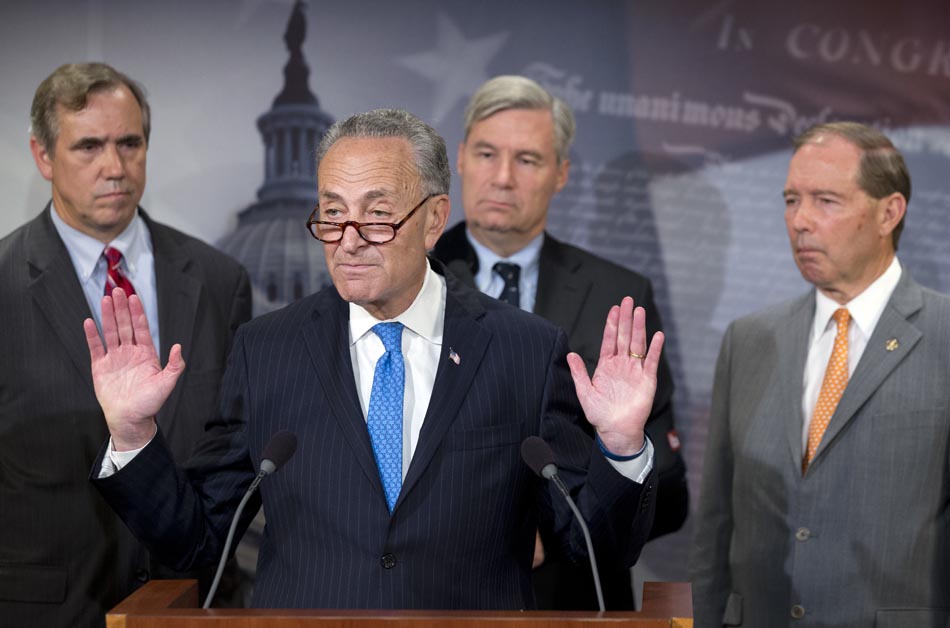 Democrats may be in the minority going into the next Congress and the incoming Donald Trump administration. But there are still ways they can fight back against conservative overreaches — and they are ready to come out swinging.

For any Democrat or liberal voter who may be feeling demoralized and afraid while looking ahead to the new year and the inauguration of Donald Trump, new reporting from Burgess Everett at Politico provides much-needed hope and strength.

Senate Democrats, eager to expose the president-elect as a fraud full of broken promises, see the confirmation hearings for many of Trump's cabinet nominees as the perfect time and place to do so.

The goal, according to lawmakers and aides: to depict Trump’s chosen inner circle of billionaires and conservative hard-liners as directly at odds with the working-class Americans he vowed to help.

“His campaign, based on his nominations, was a charade. [H]e sold the American public on a story that is a false story. It is a scam,” said Sen. Jeff Merkley (D-Ore.), who was recently promoted to chief deputy whip. “He said: ‘I’m for working people and for taking on Wall Street, I’m for draining the swamp.’ And his nominees say the exact opposite.”

Shareblue has been documenting precisely this contradiction between Trump's campaign blather and the reality of the team he is assembling. And it is heartening to know that Democrats in Congress are taking note of it as well, planning to put the utter hypocrisy on display for the nation, and "to make the case to Trump voters that what they voted for is a far cry from what they’ll be getting with the next president."

Some of the richer targets for this exposure include Rex Tillerson, the ExxonMobil CEO with friendly ties to Russia whom Trump has nominated for Secretary of State; Steven Mnuchin, Trump's Treasury Secretary nominee and a former Goldman Sachs partner and foreclosure magnate; Health and Human Service Secretary nominee Tom Price, an opponent of the Affordable Care Act and an antagonist on reproductive health; and Betsy DeVos, Trump's nominee for Secretary of Education, whose main qualification appears to be, as with other nominees, the desire to destroy the department she would be leading.

As Senator Sherrod Brown (D-OH) notes, "You need a scorecard to keep up with the attack on American values.”

According to Politico, the top Democrats on 16 Congressional committees recently put out a "statement of principles" which declared that cabinet nominees should have to clear an FBI background check and release financial details and other material before receiving a vote on their nomination.

And during the hearings, Democrats will be armed with a trove of opposition research on all of the nominees' backgrounds, business dealings, tax and financial records, and potential conflicts of interest.

While they may not be successful in thwarting the cabinet candidates' confirmations, the process of lengthy, intense hearings is still important and useful. As Senator Chris Murphy (D-CT) notes, "We’ve never seen the kind of radical nominees that Trump has put up. And frankly, we’ve never seen nominees with this little experience."

Indeed, Trump's cabinet is shaping up to be largely unqualified, dangerous, frightening, and flat-out absurd.

And while Democrats may not have the numbers or the power to win every battle, putting up the best fight that they can is integral to the health and transparency of our democracy.