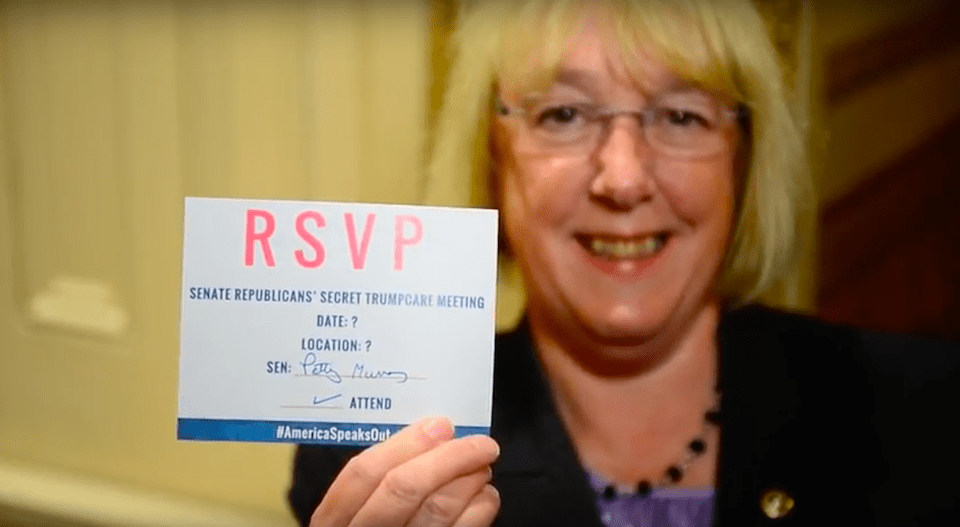 Senate Democrats
Get The American Independent in your inbox

The Republicans are still trying to keep their health care repeal process hidden. But Senate Democrats aren't giving up the effort to bring it out into the open.

It seems nothing can get Senate Republicans to budge from their stubborn secrecy regarding their health care repeal bill.

The American people disapprove of the GOP's actions, and their own Democratic colleagues have tried in vain to demand involvement in the process.

But Republicans, led by Majority Leader Mitch McConnell, are determined to keep their meetings behind closed doors, in decidedly unmixed company.

Yet Republican Sen. John Thune of South Dakota insists, bafflingly, that the meetings are "open to anybody."

So Senate Democrats are aiming to hold Thune to that statement, and are willing to try whatever it takes to gain access to the meetings in order to bring this process into the light — even crashing the meetings with their own RSVP cards in hand.

MURRAY: I'm Senator Patty Murray. I'm signing this RSVP card so that I can get into the Republicans' secret meeting.

MENENDEZ: My colleague, Senator Nunes, says that these Republican health care meetings — that they're open to everybody! That's news to me. But if that's the case, here we go, I'm going to RSVP. [signs card]

SCHUMER: [writing] 'Schumer will attend if we can find them.'

MERKLEY: Can you help me find out where this meeting is, what the day is, and where the location is? Because, they're keeping it very secret because they don't want the American people to know.

WHITEHOUSE: Senator Whitehouse, not invited to attend, just like everybody else.

In a statement, Democratic Sen. Patty Murray of Washington put Thune and his colleagues on the spot, noting that if the meetings are truly open to "anybody," then Democrats "want to be there so we can let people across the country know exactly how this bill would increase health care costs, undermine women’s access to health care, and cut off coverage for millions of families."

"[We] are looking forward to getting more details on the next Trumpcare meeting so we can attend and weigh in on behalf of the families we represent," she continued.

Alongside Murray and Minority Leader Chuck Schumer of New York, 27 other Democratic senators, representing 21 states in total, have sent their RSVP cards to the GOP.

Democrats have been fighting back every step of the way against the Republicans' secrecy and underhandedness in this process, holding the floor to speak out against the damage the repeal bill would cause, and to sound the alarm about, in the words of Sen. Cory Booker of New Jersey, the "wrongness of this moment in history."

Republicans may control both chambers of Congress, but Democrats will not let being in the minority dissuade them.

After all, they represent the majority of Americans — including those in the reddest states — who do not want what the GOP is trying to force on them.