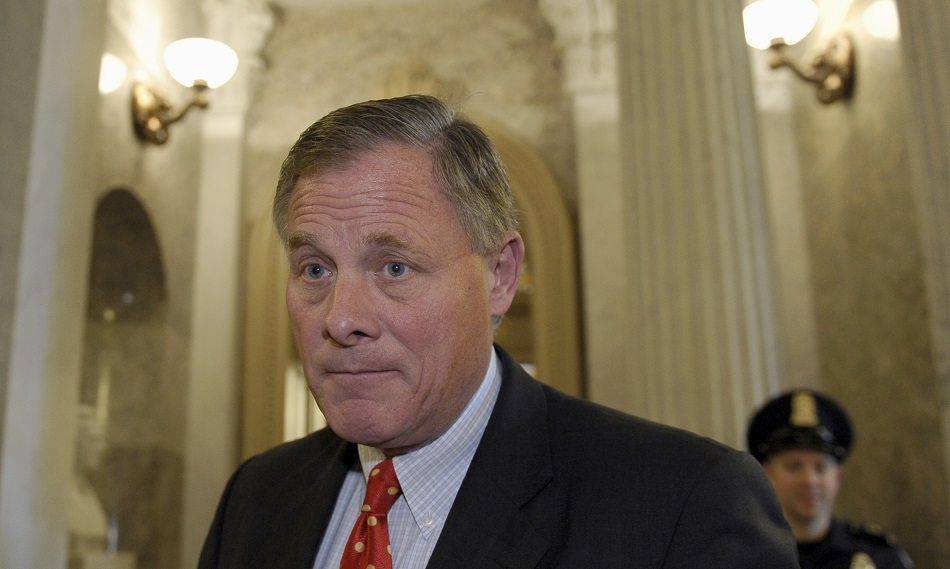 Republican Senator Richard Burr of North Carolina is ostensibly leading the intelligence committee's investigation into Donald Trump's possible collusion with Russia, but he has thus far failed to subpoena any documents or witnesses or even bother to appoint any full-time staff, suggesting it is not an investigation he is taking seriously at all.

Three months after launching an investigation into Russia's interference in the 2016 presidential election, Senator Richard Burr (R-NC), the chair of the Senate Intelligence Committee, is refusing to do his job.

If you watched the Senate Intelligence Committee hearings in March on Russian interference in the presidential election, you would have seen what appeared to be reassuring unity of purpose between Burr and the committee's ranking member, Democratic Senator Mark Warner of Virginia.

Unfortunately, recent revelations show such unity to be an illusion and reinforce the need for a non-partisan independent investigatory body to probe the issue of collusion between the Trump campaign and the Russian government. And a new poll shows that 73 percent of voters do not trust congressional Republicans and want an independent investigation.

In late March, Burr assured the public, “We have devoted seven professional staff positions to this investigation. These are staffers who already had the clearance.” However, as the Daily Beast reports, multiple sources say the investigation has no full-time staff, and the part-time staffers do not have investigative or prosecutorial experience, nor expertise on Russia.

In addition, the committee has not issued subpoenas to any of the Trump associates believed to have ties to Russia, including former Trump National Security Adviser Michael Flynn, former Trump campaign manager Paul Manafort, or even former Trump foreign policy adviser Carter Page, who is a suspected Russian spy.

Burr has even refused Democratic committee members' requests to sign letters seeking potentially crucial evidence from Trump and his team, such as emails and phone records, giving those who possess such evidence ample time to destroy or modify them.

The unwillingness to investigate Trump, from a party that made no secret of its antipathy toward Hillary Clinton and its patently partisan intent to bury her in investigations if she were elected, shows how politicized this investigation is turning out to be.

Burr himself displayed shocking hostility toward Clinton just a week prior to the 2016 election, when he "joked" with a crowd of gun owners about shooting her:

Nothing made me feel any better than [when] I walked into a gun shop, I think, yesterday and there was a copy of Rifleman on the counter. It’s got a picture of Hillary Clinton on the front of it. I was a little bit shocked at that [because] it didn’t have a bullseye on it. [laughter]

Now, Burr seems shockingly unwilling to investigate the growing evidence that Russia hacked the presidential election to ensure Clinton's defeat, and that Trump's campaign may have cooperated to achieve that goal.

For his part, Warner's patience with his GOP colleague is running out. A committee source confirmed Warner "is not satisfied with the pace of the investigation and he doesn’t think it’s moving fast enough."

If Burr is too blinded by partisan politics or Clinton hatred to do his job on behalf of the United States, he needs to recuse himself from the investigation. In addition, the American people need to continue to call for an independent and non-partisan investigation into the collusion between Trump and Russia that undermined our electoral process and threatens the future of our entire democracy.