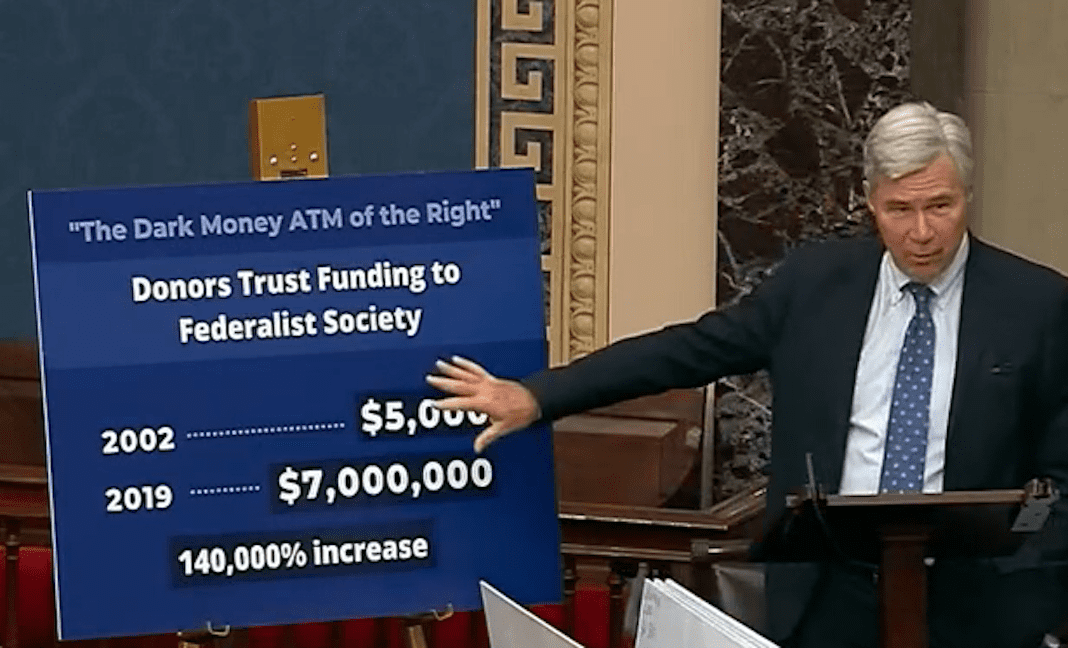 Democratic Sen. Sheldon Whitehouse of Rhode Island speaks ahead of the vote on the DISCLOSE Act, Sept. 22, 2022. C-SPAN
Get The American Independent in your inbox

Senate Republicans on Thursday blocked a bill that would have required political groups to disclose who pays for their political campaign spending. Many of those same GOP lawmakers have previously complained about the influence of "dark money" groups in the political system.

The party-line vote in the Senate on advancing the Democracy Is Strengthened by Casting Light On Spending in Elections (DISCLOSE) Act was 49-49. Because of the Senate's filibuster rule, it required at least a 60-vote supermajority to pass.

In 2010, the Supreme Court ruled 5-4 in Citizens United v. Federal Election Commission that political groups could spend as much money as they wanted to support political candidates and ballot referendums as long as they did not coordinate directly with official campaigns.

Justice Anthony Kennedy wrote in his majority opinion that this would not lead to corruption because voters could consider the source of the ads.

"Disclosure permits citizens and shareholders to react to the speech of corporate entities in a proper way," he wrote. "This transparency enables the electorate to make informed decisions and give proper weight to different speakers and messages."

But while federal campaigns and political action committees are required to disclose who their large donors are, tax-exempt nonprofits are not.

As a result, voters frequently see ads sponsored by groups designated as 501(c)(4) "social welfare" organizations by the IRS committees, such as the American Action Network and Americans for Prosperity, with no way to know who is really paying for them. Such a group could claim to be for clean air, for example, and yet could spend millions backing an anti-environmental candidate without ever disclosing that its ads were entirely funded by the oil and gas industry.

Since 2010, Democratic lawmakers have been trying to bring transparency to the system by passing legislation that would require all outside groups to disclose funding sources for "independent expenditures" on communications. The Federal Election Commission defines such expenditures as those paid for "a website, newspaper, TV or direct mail advertisement that: Expressly advocates the election or defeat of a clearly identified candidate; and [is] not made in consultation or cooperation with, or at the request or suggestion of any candidate, or his or her authorized committees or agents, or a political party committee or its agents."

Senate Republicans have repeatedly used the filibuster to block those efforts since the bill was first introduced in 2010.

The lead sponsor of S. 4822, the current version of the DISCLOSE Act, is Rhode Island Democratic Sen. Sheldon Whitehouse, who said in July that the bill was needed to bring light to anonymous special interest influence in American democracy.

"I submit to you that the distress in our republic has much to do with corrupting political influence acquired via unlimited anonymous dark money," he told colleagues during a Senate Rules Committee hearing. "That dark-money influence has created a disconnect between what Americans want their government to do and what it actually does. ... Floods of dark money caused this mess, so we can fix it. "

Minority Leader Mitch McConnell, who has long led the opposition to the DISCLOSE Act, denounced it on Wednesday from the Senate floor, saying that a "zombie DISCLOSE Act" would "give Democratic friends in the unelected bureaucracy even more power to police political speech and activism of private citizens. ... What Democrats want is a huge new step that would reduce private citizens' privacy and chill America's constitutional rights."

But in recent years, McConnell and other Republicans have frequently complained about dark money being spent by progressive organizations in support of Democratic candidates.

"Millions are being poured into Wisconsin by Dark Money groups," lamented Wisconsin Sen. Ron Johnson, who faces a tough 2022 reelection race against the state's Democratic Lt. Gov. Mandela Barnes. "I need strong grassroots support to fight back. Can I ask you to join me today?"

"@stevebullockmt and his dark-money allies are politicizing Coronavirus. It's disgusting," tweeted Montana Sen. Steve Daines during his 2020 campaign for reelection against Democrat Steve Bullock.

During the March 2022 confirmation hearings for Supreme Court Justice Ketanji Brown Jackson, several GOP senators, including McConnell, Chuck Grassley of Iowa, and Cornyn, criticized the influence of progressive nonprofit groups in support of her nomination.

But none of these Republicans voted for the DISCLOSE Act, which would have forced nonprofits to disclose who funds their efforts, and would have specifically required disclosure expenditures related to judicial confirmations.

Some of those who voted no had previously expressed support for more transparency. The no votes contradicted previous statements from a few of the opponents.

McConnell told NBC's "Meet the Press" in 2000 that while he opposed campaign finance limits, he and the GOP were in favor of full transparency: "We need to have real disclosure. And so what we ought to do is broaden the disclosure to include at least labor unions and tax-exempt business associations and trial lawyers so that you include the major political players in America. Why would a little disclosure be better than a lot of disclosure?"

Wisconsin Sen. Ron Johnson explicitly told the Milwaukee Journal Sentinel's editorial board during his 2010 campaign for the Senate that he favored the DISCLOSE Act: "It's far better to have those contributions coming to the campaigns and coming to parties be disclosed. ... Whatever's a reasonable period of time. A couple days. And get those transparent postings of full disclosure of who's donating to what group on the Internet and get that posted. I would like to see total transparency (of third party groups)."

In June 2021, Maine Sen. Susan Collins said during a speech on the Senate floor: "Certainly, there are improvements that can be made in our election laws. For example, I support efforts to disclose 'dark money' in campaigns."

Polls conducted in 2021 showed overwhelming support for disclosure of dark-money donors, with a Data for Progress survey finding 73% of likely voters supporting it and a Navigator poll finding 85% support.

"Passing the DISCLOSE Act is essential to protecting our democracy. Americans are tired of wealthy corporations and billionaires buying influence and policy outcomes by flooding our elections with millions of dollars of dark money," Arik Wolk, a spokesperson for End Citizens United/Let America Vote, told the American Independent Foundation. "They want to see our government work for us. That's why over 90% of voters support ending dark money, and why we must keep working to shine a light on which corporations and billionaires are trying to buy our elections."