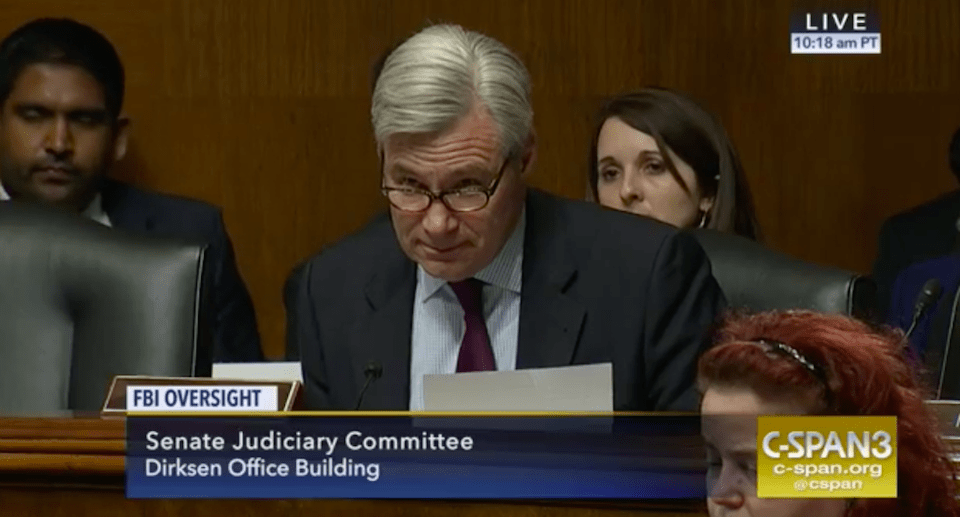 Democratic Sen. Sheldon Whitehouse asked FBI Director James Comey to explain his decision to release a damaging letter about about Hillary Clinton's emails less than two weeks before the election, which Comey still defends as necessary. His testimony revealed, however, that it was not necessary at all.

FBI Director James Comey has continued to defend his decision to send members of Congress his damaging letter about taking "investigative steps" regarding Hillary Clinton's emails right before Election Day, but his testimony to the Senate Judiciary Committee shows that decision was not necessary.

During the hearing, Sen. Sheldon Whitehouse (D-RI) confronted Comey on his claim. Whitehouse pointed out that the emails — for which Comey had not even secured a search warrant and ultimately proved to be of no value or criminal concern — had a huge impact on the election and could have been reviewed without putting a thumb on the scales.

#Comey says he sent email letter because FBI couldn't review emails before election. @SenWhitehouse: "But they did." pic.twitter.com/j29KbQqZUP

WHITEHOUSE: It would seem to me that it would be as sensible at that moment to say, "How quickly could you get a search warrant, and how quickly can we get an answer to that question? Because I made a promise to people in Congress that I would get back to them with this information, and if there is anything real here, you need to get on that, pronto, so that I could answer that question." So that the search warrant precedes the letter, rather than the letter preceding the search warrant — particularly in light of the widely adhered to policy of the department not to disclose ongoing investigative materials, and the truly exceptional nature of disclosures.

WHITEHOUSE: Why not the search warrant first?

COMEY: I pressed them very hard on that and found credible their responses that there was no way no way they could review the volume of information they saw on the laptop in the time remaining.

WHITEHOUSE: Except that they did.

COMEY: Well, they did because our wizards at our operational technology division came up with a way to dedupe electronically that, as I understand it, involved writing a custom software program that’s going to help us in a lot of other areas. But the investigative team said, ‘Sir, we cannot finish this before the election.’ So that, to my mind, that then made the judgment appropriate.

The exchange shows once again that Comey mismanaged the investigation, unnecessarily injecting the agency into the election and casting a shadow on the results, if not outright changing the results altogether. It didn't have to happen, but Comey made a series of choices that turned out to have disastrous consequences.

New bill would stop Senate from blocking Supreme Court pick like it did to...