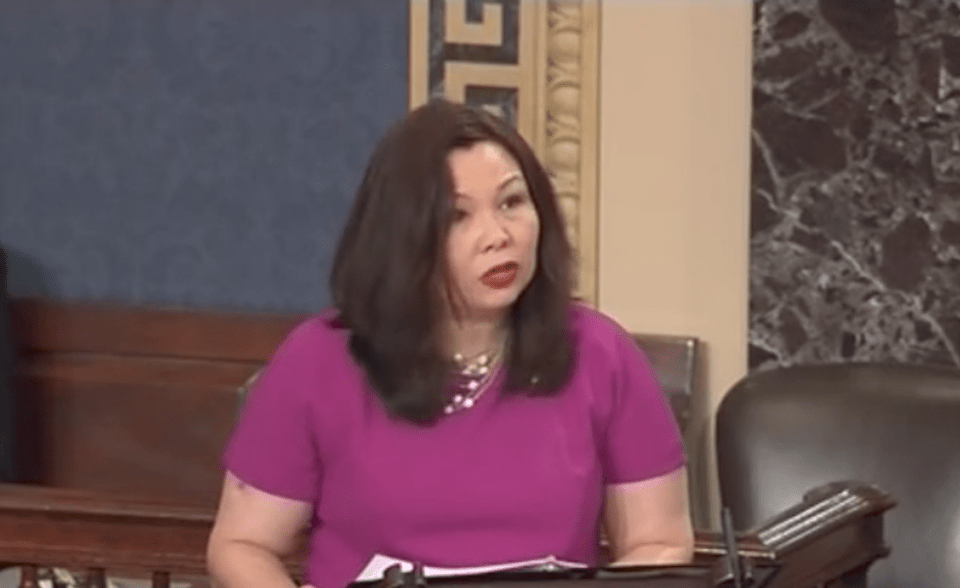 Senator Tammy Duckworth (D-IL) kicked off the week with a fiery speech on the Senate floor directly aimed at Donald Trump's policies and the Republicans who go along with them.

While Republicans desperately try to eke out a win before Donald Trump's first 100 days are up, Democrats started the week with a rousing call to resistance from Senator Tammy Duckworth (D-IL). In her first full speech on the Senate floor, Duckworth eloquently framed the stakes of the resistance in uniquely American terms.

Duckworth has been a consistent and strong voice against Trump and his administration. In 2016, while she was still in the House, she condemned Trump's thoughtless comment that he had "always wanted to get the Purple Heart," after he was given one by a veteran at a Trump rally. Duckworth, who lost both legs in combat in Iraq, earned her Purple Heart the hard way.

Trump, meanwhile, has continued to show unthinkable insensitivity to Purple Heart recipients, recently staging a crass photo-op with an injured veteran at the National Military Medical Center whom he "congratulated" for receiving the decoration.

During her powerful Senate floor speech, Duckworth took aim at a raft of Trump's policies, and explained how they are not just antithetical to Democratic positions, but a betrayal of American values:

But when we’ve failed to stay true to our core values – when we deny another person our nation’s promise of opportunity – our nation's strength suffers. When a child can’t access the tools to succeed in school, when a woman can’t afford basic health care, when refugees fleeing terror see the door slammed shut in their faces, when we deny civil rights on the basis of skin color or sexual orientation or religion, and when a working family can’t put food on the table, our whole nation suffers.

At the end of the day, America’s greatness depends on each of us remaining true to the common values of our nation.

But we’ve lost sight of those values. The nation that built an interstate highway system, that was a refuge for immigrants who became the foundation of our economy, this nation that pushed humanity to new heights, first with planes and helicopters and then into space, that same nation seems to have forgotten how to invest in itself.

Our country that ushered in the era of aviation is now home to aging airports that struggle to compete with their global competitors.

Our country that took on the herculean task of reversing the flow of the Chicago River to protect the city’s drinking water can no longer muster the resources to modernize public water systems to prevent our children from being poisoned by lead.

And our country that built the greatest military the world has ever seen — sending a signal that we will not cower in front of anyone — now finds itself with leaders who believe in the misguided notion that it is better for us to hide behind walls than to help lead with strength.

Make no mistake, America has not lost her greatness. Our nation remains the dominant force on the global stage. But if we don’t act, our adversaries are positioned to overtake us.

Though some may try to convince us the path forward is less engagement with the world, less acceptance of others, and less investment in ourselves, I know that the path forward for our country cannot include — does not include — turning our backs on the shared values that built our nation.

Trump's first 100 days have been an all-out assault on those American values Duckworth describes. From his failed Muslim bans to his racist attorney general, from his failed assault on health care to his attacks on Planned Parenthood, right down to his broken promises on infrastructure and his failed border wall.

Trump is deeply unpopular, and Americans are rejecting his reckless agenda. In 2018, voters will have to choose whether to continue on this path of failure or change course. Hopefully, fierce opponents of this destruction, like Tammy Duckworth, will lead them to the right decision.