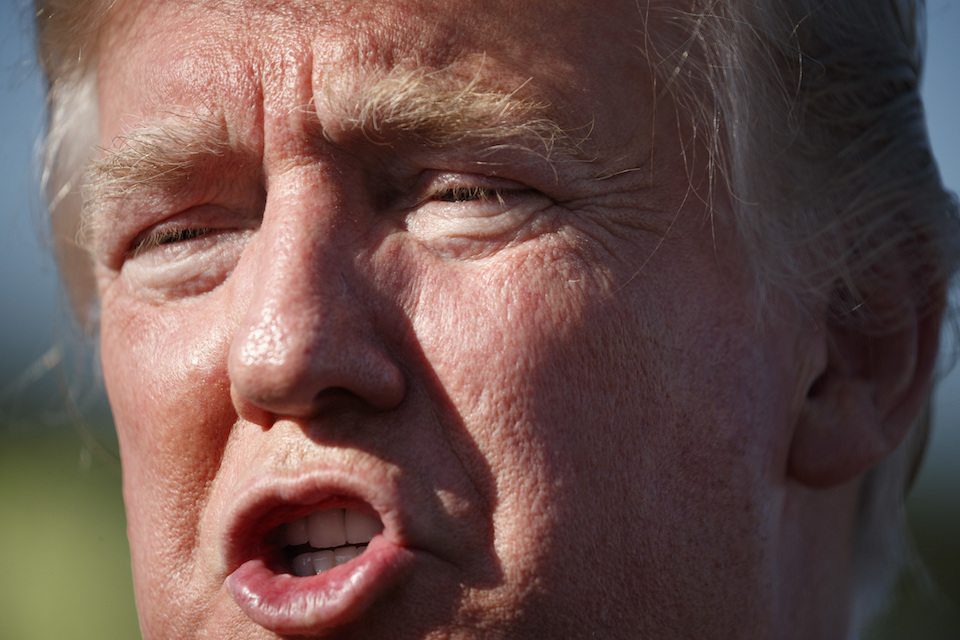 Pushing his latest race-baiting line of attack, Trump's attempt to dent the NFL didn't work over the weekend. But he just can't help himself.

A day after the NFL community — including players, coaches, GOP owners, commentators, and even some national anthem singers — united to condemn Donald Trump’s race-baiting attacks on silent sideline protests, Trump scrambled to try to make his case again on Twitter Monday morning.

So proud of NASCAR and its supporters and fans. They won't put up with disrespecting our Country or our Flag - they said it loud and clear!

Many people booed the players who kneeled yesterday (which was a small percentage of total). These are fans who demand respect for our Flag!

If Trump hoped to divide the billion-dollar professional sports league, he failed miserably.

Instead he single-handedly elevated the NFL protest issue. What had been a yearlong, simmering issue involving a handful of players exploded into public view on Sunday, with nearly 150 players taking part in some sort of public protest. In just one game between the Denver Broncos and the Buffalo Bill, nearly 40 players knelt during the national anthem.

On the Baltimore Ravens, no players had previously protested during the national anthem—until Sunday. Meanwhile, The hashtag #TakeAKnee became a number-one trend on Saturday on Twitter.

The signs of historic protests were everywhere:

Former San Francisco quarterback Colin Kaepernick sparked the NFL movement last season when he refused to stand during the pre-game national anthem to protest police violence and racial inequality in the U.S.

Trump’s denigration not only put the protests in the national spotlight, he also gave NFL players a televised platform to denounce the president and call out his racist behavior.

“What president?” Washington Redskin Josh Norman asked on Sunday. “Not my president. He was chosen, true. But when a president acts like that, what do you say to that? That’s not someone that stands with dignity, pride, respect, honor.”

Hall of Fame quarterback and Fox Sports commentator Terry Bradshow doesn’t condone the sideline protests. But on Sunday he suggested Trump doesn’t understand how American freedoms work, and urged him to focus on more pressing issue, such as North Korea.

The NFL’s message on Sunday to Trump was clear: If you attack our any of our players, if you insult them as “sons of bitches” the way Trump did, we will stand with them united.

Thanks to Trump’s prompting, the sideline protests also spread to major league baseball over the weekend, as well as to the WNBA.

Trump’s weekend attempt to start another culture war is exactly why a new poll shows an overwhelmingly majority of Americans think he’s done more to divide the country than to unite it.