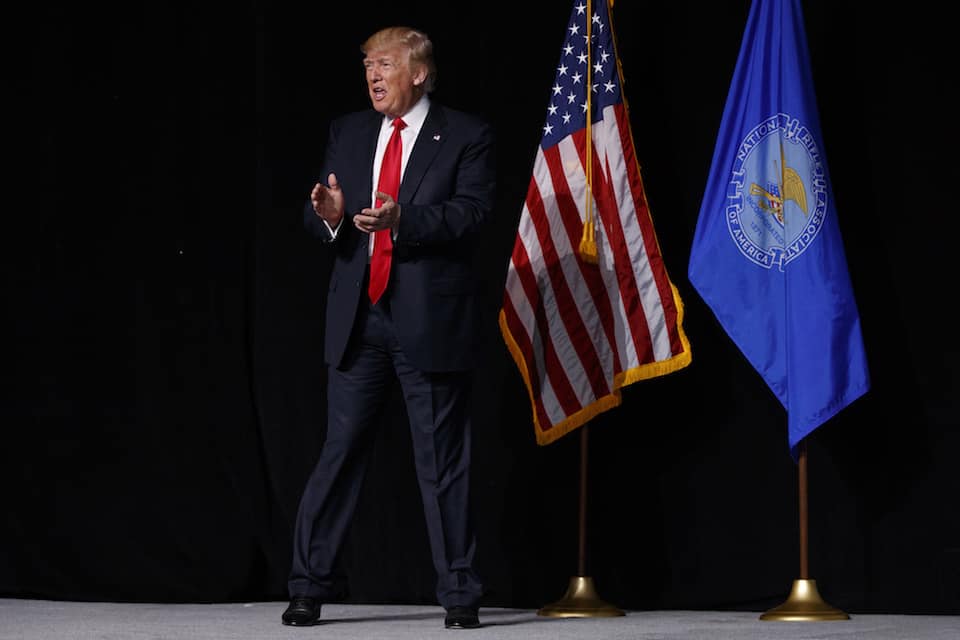 At the annual conference of the National Rifle Association in Atlanta, Donald Trump said Karen Handel, the Republican candidate Georgia's 6th District, is "totally" for the organization, but many of the NRA's stances are at odds with Georgia voters and Americans overall.

Donald Trump took some time during his address to the NRA's annual meeting in Atlanta to praise Karen Handel, the Republican candidate facing Democrat Jon Ossoff in the runoff for Georgia's 6th Congressional District.

TRUMP: I'd like to congratulate Karen Handel on her incredible fight in Georgia six. The election takes place on June 20th — and by the way, on primaries let's not have 11 Republicans running for the same position, OK? It's too nerve-shattering. She's totally for the NRA, and she's totally for the Second Amendment, so get out and vote.

While Trump likely saw the rally as a chance to boost Handel, for whom is also holding a fundraiser in Atlanta, the meeting ties her to the NRA's slate of positions at odds with the public.

In Georgia, 54 percent of voters opposed a bill last year that would have allowed concealed weapons on college campuses, which . The NRA, on the other hand, intensely supported this dangerous legislation, which would decrease safety while also increasing insurance costs for these schools.

The disconnect on campus carry carries over to a host of issues on which the NRA has taken an extreme position that mainstream gun owners distance themselves from. These include the NRA's support for the deregulation of gun silencers (supported by the Trump family), as well as the elimination of gun-free school zones.

Handel may also face a hard time supporting the NRA's opposition to enhanced background checks, which Americans have supported for years. Even after the Sandy Hook School massacre, the NRA refused to budge on the life-and-death issue.

This isn't the first misfire from the gun group in the district. The NRA already made a strategic error in the race, airing an attack ad with a fraudulent claim about Ossoff's upbringing that had to be edited out by a local radio station.

Ossoff's strong performance in the primary was largely fueled and financed by the resistance to Trump. If he wins, another humiliating defeat for Trump and his fumbling presidency. His decision to tie Handel to the NRA and its unpopular policies could easily backfire.