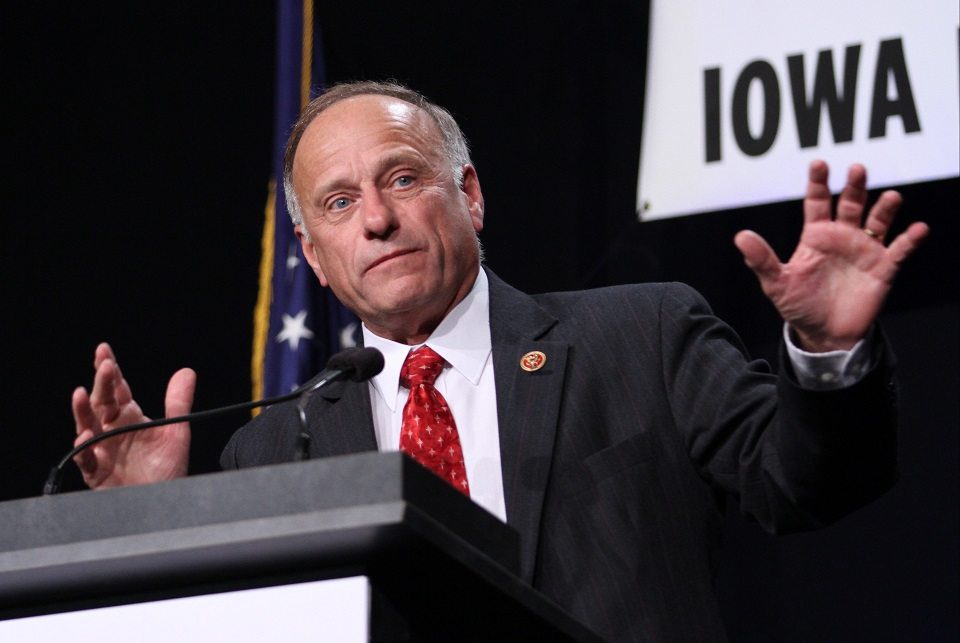 After Representative Steve King (R-IA) tweeted out a baldly xenophobic statement, and then doubled down when called out for it on television, few of his Republican colleagues have seen fit to repudiate him publicly.

In the age of the Donald Trump administration, outrageous attacks on immigrants have become par for the course. But Representative Steve King (R-IA) managed to sink to a new low, with a baldly racist and xenophobic tweet about the need to "restore our civilization," which he said cannot be done with "somebody else's babies":

This is certainly nothing new from King, who has a history of overtly racist statements. In just one example, in 2013, he claimed that most people brought to the U.S. as children were working as drug mules, and have "calves the size of cantaloupes" from the physical exertion.

But this most recent statement crossed a line into overt white nationalism.

The man whom King is endorsing in that tweet, Geert Wilders, is a Dutch politician whose far-right Freedom Party has flirted with neo-Nazism. And King's comments are being enthusiastically promoted by former KKK grand wizard David Duke.

But even aside from those associations, the mere fact that a sitting U.S. Congressman sees "our civilization" as wholly defined by race, and that people of other skin colors are "somebody else's babies" even if they grew up in America and believe in American values, is absolutely horrifying.

King doubled down in an interview with CNN's Chris Cuomo, leaving no doubt what he meant by "somebody else's babies":

CUOMO: Like, you were trying to say 'someone else's babies' means you're either white or you're not right. And as you know, that is anathema to what America is all about. Can we get agreement on that?

KING: Well, I want to — here's — actually, if you go down the road a few generations or maybe centuries with the intermarriage, I'd like to see an America that's just so homogeneous that it — we look a lot the same from that perspective.

And while some prominent conservative figures have spoken out against King, there have thus far been scant few public repudiations from elected Republican officials.

.@SteveKingIA What exactly do you mean? Do I qualify as "somebody else's baby?" #concernedGOPcolleague

.@SteveKingIA <--- Rep King is...
A Fake conservative.
A Fake Republican.
But an authentic Cro-Magnon.

Get a clue, @SteveKingIA. Diversity is our strength. All looking alike is such a waste. A travesty. I wanna be me. All others are taken. https://t.co/mx7vgeWPU8

It is appalling that, in this day and age, a member of Congress believes America should be "homogeneous" and is comfortable openly advocating white nationalism. And it is distressing to see so little pushback from his colleagues in defense of American citizens.