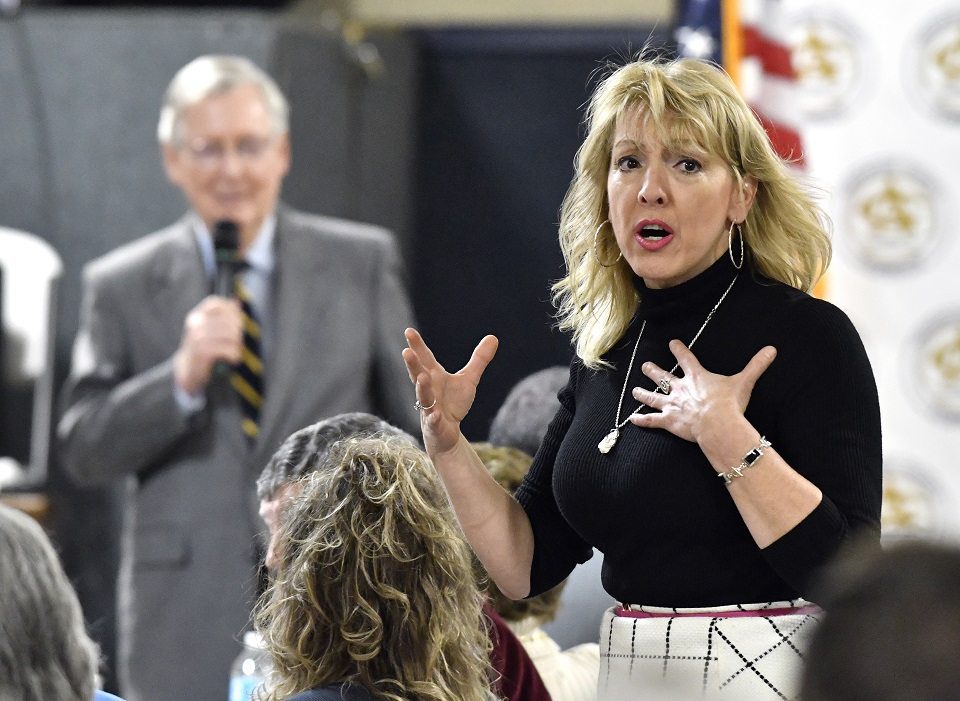 Having defeated Hillary Clinton, the GOP appears to have chosen Senator Elizabeth Warren as their next woman politician to demean and demonize. But this time around, voters know exactly what Republicans are doing.

The Republican Party has apparently chosen yet another woman, Senator Elizabeth Warren (D-MA), as the villain they hope to use to personalize their party's attacks on Democrats.

Because they believe she "motivates donors to open their wallets and voters to go the polls," Politico reports, "Republicans are already making plans to raise her profile — in the worst way possible — ahead of the 2018 midterms."

But after a transparently sexist campaign against Hillary Clinton, the GOP's targeted and divisive misogyny may not be as effective this time around.

At a recent town hall, Senate Majority Leader Mitch McConnell (R-KY) faced a powerful confrontation by a constituent, Rose Mudd Perkins, who ended her statement saying, "If you can answer any of that, I'll sit down and shut up like Elizabeth Warren":

Angry constituent gives Mitch McConnell the what for pic.twitter.com/tyHseJVtqd

PERKINS: The last I heard, these coal jobs are not coming back, and now these people don't have the insurance they need, 'cause they're poor. And they worked those coal mines, and they're sick. The veterans are sick, the veterans are broken down, they're not getting what they need. If you can answer any of that, I'll sit down and shut up like Elizabeth Warren.

After Perkins spoke, you can see McConnell smile and hear some men laugh, although it is clear that she was not joking; she was referring to an incident earlier this month when McConnell took the shocking step of silencing Warren as she was attempting to read a statement made by Coretta Scott King, Martin Luther King, Jr.'s widow and a civil rights leader in her own right, about Attorney General Jefferson Beauregard Sessions, III:

I spoke out about @SenatorSessions – until @SenateMajLdr McConnell decided to silence me. https://t.co/qbty7x0iLl

MCCONNELL: The Senator has impugned the motive and conduct of our colleague from Alabama as warned by the Chair. Senator Warren, quote, said Sen. Sessions has used the awesome power of his office to chill the free exercise of the vote by Black citizens. I call the Senator to order under the provisions of Rule 19.

DAINES: The Senator from Massachusetts.

WARREN: Mr. President, I am surprised that the words of Corretta Scott King are not suitable for debate in the United States Senate. I ask leave of the Senate to continue my remarks.

DAINES: Is there objection?

WARREN: I appeal the ruling.

DAINES: Objection is heard. The Senator will take her seat.

WARREN: Mr. President, I appeal the ruling of the Chair and I suggest the absence of quorum.

Following that incident, male colleagues of Warren's later were permitted to read the statement in whole without interruption. As former Senator Barbara Mikulski (D-MD) noted about the silencing of Warren:

When a woman stands up, she is told to shut up and sit down...But I will tell you that the women are tired that different rules are applied to us in a different way.

This treatment of Warren mirrored a dynamic many women have faced, prompting an immediate backlash on social media as women shared their own stories, co-opting McConnell's excuse that "nevertheless she persisted" as their own. Notably, McConnell's actions came in the wake of unprecedented mobilization by millions of women and allies in January at the Women's March protests against Donald Trump in Washington, D.C., across the nation, and around the world.

As the sexist and frequently abusive tone of GOP attacks on Clinton reflected, attacking prominent women leaders is nothing new for the Republican Party. Well before the 2016 presidential election, the GOP spent $75 million during the 2010 midterms making then-House Speaker Nancy Pelosi (D-CA) the face of its negative campaigning.

But this time around, their playbook might be too transparent to prove effective. As Senator Heidi Heitkamp (D-ND) noted, the strategy is obvious: "They need a boogeyman, and they’re trying to turn Elizabeth into a boogeyman."