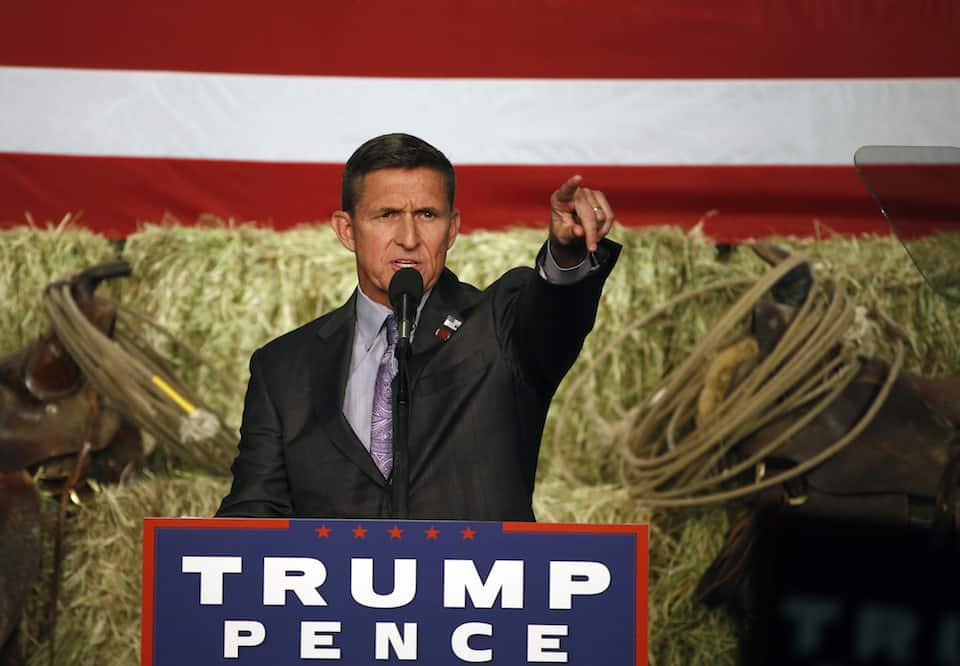 (AP Photo/ Brennan Linsley, file)
Get The American Independent in your inbox

Newly released documents show that former national security adviser Michael Flynn received payments from Russia even after the Department of Defense warned him that taking money from foreign governments would be illegal.

Donald Trump's former national security adviser Michael Flynn was warned that he would be in violation of the law by taking payments from Russia's state-owned RT network, but he did anyway.

The House Oversight Committee recently released documents that shed new light on the behind-the-scenes communications between Flynn and the Defense Intelligence Agency (DIA), a subsidiary of the Department of Defense.

In October 2014, after Flynn had retired from his position as director of DIA in August of that year, he received a letter from the DIA Office of General Counsel warning him that it would be illegal to receive payments from foreign governments.

The letter cites the Emoluments Clause of the Constitution, noting it "prohibits receipt of consulting fees, gifts, travel expenses, honoraria, or salary by all retired military personnel, officer and enlisted, regular and reserve, from a foreign government unless congressional consent is first obtained."

After he received that letter, Flynn traveled to Moscow in December 2015, spoke to RT, and dined with Vladimir Putin. He was paid for the appearance, as receipts released by the committee show.

Flynn failed to disclose those payments as part of the vetting process to join the Trump administration.

The White House has refused to turn over documents relating to Flynn's payments to the committee investigating the ties between Trump and Russian meddling during the 2016 election.

The Department of Defense inspector general has now launched an investigation into Flynn's apparent violation of the law.

Meanwhile, members of Congress from both parties are blasting Flynn's behavior.

Rep. Elijah Cummings (D-MD), the ranking member on the House Oversight Committee, said in a release, "These documents raise grave questions about why General Flynn concealed the payments he received from foreign sources after he was warned explicitly by the Pentagon."

Later, Cummings said "excuses from the White House are not going to fly" as they refuse to produce the relevant documents, noting, "I honestly do not understand why the White House is covering up for Michael Flynn."

"It does not make any sense," he added, "and it makes the American people think the White House has something to hide. There is obviously a paper trail that the White House does not want our Committee to follow."

Sen. Richard Blumenthal (D-CT) cited the letter as "powerful, mounting, incontrovertible evidence that there has been a violation of criminal law."

Rep. Jason Chaffetz (R-UT), chairman of the Oversight Committee, said the payments were "inappropriate" and that there are "repercussions for the violation of law."

Michael Flynn's failure to adhere to disclosure requirements regarding these payments carries a potential prison sentence of several years. Moreover, these revelations cast further doubt upon the Trump Administration's credibility as it relates to navigating conflicts of interest concerning Russia. To put it simply, the America people deserve a better standard than this when it comes to someone who was picked by President Trump to serve as National Security Advisor.

After Flynn appeared in Russia for a paid appearance, allegedly in violation of the law, he joined the Trump administration, but was later let go for failing to disclose his communications with Russia, even though Trump repeatedly insisted Flynn had done nothing wrong and was a victim of "fake news." Now the White House is obstructing the investigation into Flynn's communications with and payments from Russia.

It certainly seems there is a cover-up underway, and it could go all the way to Donald Trump.