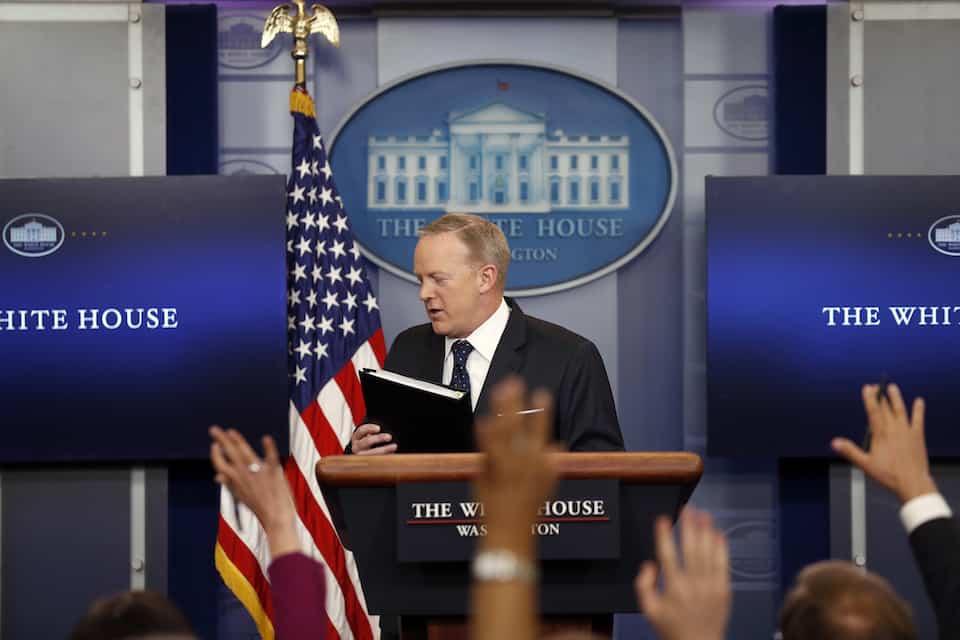 The entire intelligence community agrees that Russia interfered in our election, and 68 percent of Americans are concerned about the Trump campaign's possible involvement. But the president of the United States? Not so much.

Russia attempted to hijack our democracy and influence the outcome of our presidential election, and Donald Trump and his administration couldn't care less.

That was confirmed again on Tuesday by White House press secretary Sean Spicer, who admitted, in an exchange with OANN reporter Trey Yingst, that he has not even talked about it with Trump.

Asked whether Trump believes the Russian government interfered in the election, Spicer tried to dodge by saying he had not had a chance to talk about it with Trump. But that admission — that such interference by a foreign entity is not a priority for the White House — only makes it worse:

June 20, 2017 — Spicer still can't say if Trump believes that Russia interfered in the 2016 election, despite U.S. intel saying they did pic.twitter.com/VIwCZmfpuc

YINGST: Follow up on Steve's question on Russian sanctions. Just very plainly, a yes or no answer: Does President Trump believe that the Russian government interfered in the 2016 elections?

SPICER: I think — I have not sat down and talked to him about that specifically. And obviously we've been dealing with a lot of other issues today. I'd be glad to touch base—

YINGST: Generally speaking, I mean, there's conversation about Russian interference in our elections. There's 16 intelligence agencies that say that they did. The former FBI director said that without a doubt, the Russians interfered.

SPICER: I have not sat down and asked him about his specific reaction to them. So I'd be glad to touch base and get back to you.

As Yingst noted, the entire intelligence community has concluded that Russia aggressively attempted to influence our election, by weaponizing social media to spread fake stories and by launching cyberattacks, the full extent of which are still not fully known.

Trump has repeatedly dismissed stories about Russia as "fake news." More concerning, though, is that neither he nor his administration appears to show any concern about Russia's meddling or what that means about the vulnerability of our democratic process in future elections.

During his Senate testimony, former FBI Director James Comey testified that Russians are "coming after America" and "they will be back." More importantly, however, Comey said he did not "remember any conversations with the president about the Russia election interference."

Quite simply, Trump has shown no interest in the subject.

And neither has Attorney General Jeff Sessions, according to his own testimony before the Senate last week. As Independent Sen. Angus King of Maine noted after Sessions's testimony, Sessions never sought any briefings on Russia's interference.

"I only know what I read in the papers," Sessions said.

That was an extraordinary admission. As King commented, "This is the most serious attack on the United States since September 11th, and the chief law enforcement officer doesn’t seem very interested in it."

Trump and his White House might not want to know about Russia's interference in our election, but the majority of Americans certainly do. A recent CBS poll shows 62 percent of Americans believe Russia interfered in the election, and a sizable number of those — nearly half — believe Russia did it to help Trump.

Another recent poll shows that 68 percent of Americans are at least moderately concerned that the Trump campaign, if not Trump himself, had inappropriate ties to Russia.

That Russia interfered in our election is no longer a question. The entire intelligence community is in agreement and deeply concerned about Russia's interference in our election. Despite the administration's best efforts to confuse the issue or outright deny it, so are the American people.

The real question is, Why isn't Trump?