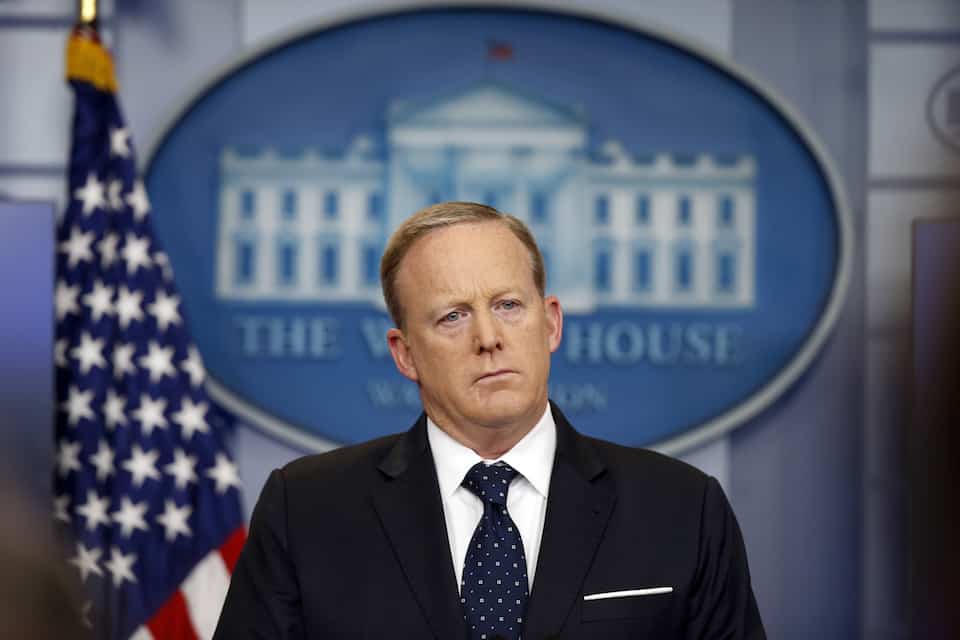 After the White House spent a full week refusing to hold any on-camera press briefings, press secretary Sean Spicer claimed his team has "tremendous respect for the First Amendment."

White House press secretary Sean Spicer broke the Trump administration's week-long ban on on-camera press briefings, and claimed that his office has been transparent with reporters.

The comment was notable as it comes in the middle of a major clampdown on information on multiple fronts by the Trump team and their congressional allies.

Spicer told Fox News reporter Kevin Corke that the administration has a "tremendous respect for the First Amendment," and praised his team for doing a "very good job" at making themselves available to reporters. He even favorably contrasted press access under Trump to previous administrations.

This is his 1st on-camera briefing since 6/12. Monday's was off-camera, audio banned. pic.twitter.com/9xcx9FPqxj

CORKE: I wanted to know if you would sort of unpack the idea behind fewer on camera briefings, to sort of help make sense of what's going on?

SPICER: Sure. What I'll tell you is, I've said it — look, multiple times prior to actually taking the job in December and January, I explained that we're going to do what we can to communicate our message. We will — we have a tremendous respect for the First Amendment, your ability to do your job, and report. And seek out ideas. And we're going to work with you, I think the briefing is one aspect of what we do. We're here really early in the morning and really late at night, available to all of your questions, whether it's email or in person, this is one avenue to do that. We've, as you noted, opened up Skype questions to bring more people into the briefing room.

We have done multiple more opportunities for people to interact with the president, according to several folks that have been here for several administrations, we've looked at a lot of data that suggests when you look at the number of availabilities and interviews the president has given, it's pretty significant compared to past administrations, so I think that we — while you guys will always advocate for greater transparency and more access, I think that we have done a very good job of not just providing opportunities at a daily briefing, but also making ourselves available as a staff, almost 20, 24 hours a day, when it comes down to it.

And I think you look at the steps we've taken to give access to reporters, and I do think it's pretty significant. I understand you'll always have issues, you always want more, and that's fair, and that's your right. That's what a lot of the press is there to advocate for, you have an association that does that as well.

And I think that you will continue to fight for it, we'll continue to do our job. And hopefully — I do believe that if you look at it holistically, you'll see that we have a staff that's very accommodating, very — tries to get to — in response to your questions.

But just the day before Spicer praised the White House's transparency with the press, veteran CNN reporter Jim Acosta took him to task in comments aired on the network after reporters were barred from recording a briefing using either audio or video.

Acosta noted that the lockdown on reporters was "bizarre" and suggested that the media should band together and refuse to cover the briefing if restrictions continued to be placed upon them.

Similarly, while Spicer touted availability, CNN reports that "the State Department and the Pentagon have all but stopped holding on-camera briefings, too."

Even Trump himself, infamous for his addiction to the press, has gone into a bunker. He has not done a national interview since May, after he fired FBI Director James Comey and triggered the special counsel investigation into his presidency.

CNN's Brian Stelter noted, "Instead of one-upping their predecessors by offering more transparency, opening the door more widely, the Trump White House has been closing the door."

Congressional Republicans are following the leader, composing a health care bill in the Senate that will affect millions of lives and a sixth of the economy in complete secrecy without any public hearings.

Trump has campaigned and governed on an anti-free press agenda, arguing in favor of suing outlets that don't give him favorable coverage, while declaring the entire industry the "enemy."

His agenda and actions run strongly counter to the spirit of the First Amendment, and lip service from Sean Spicer cannot undo what has happened and continues to happen.