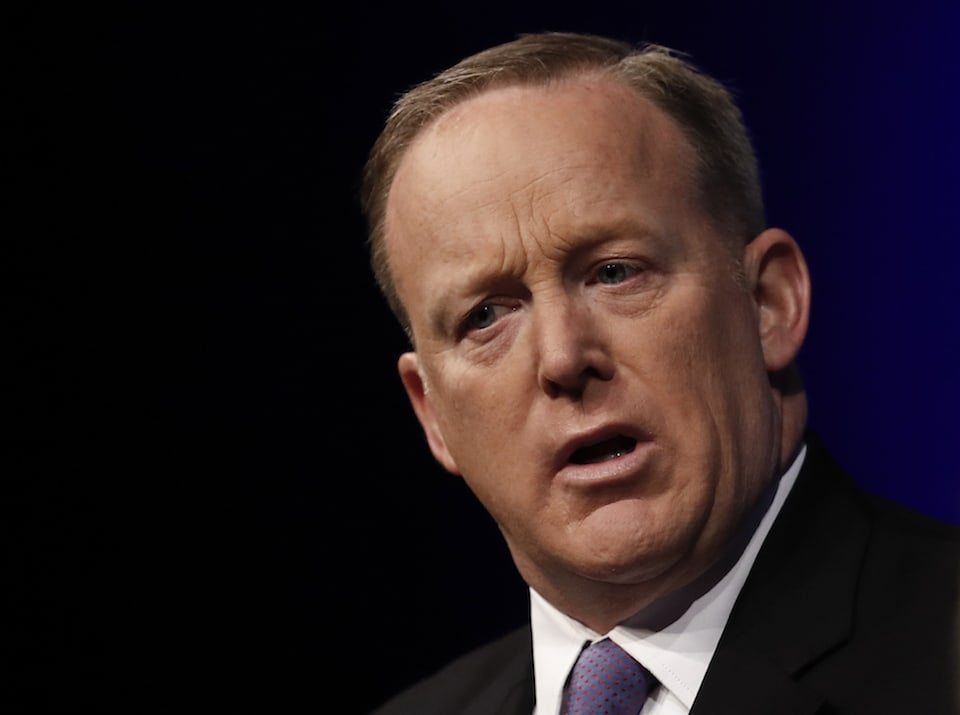 The latest utterly false claim from the Trump administration is quite the doozy.

The White House is fond of congratulating Donald Trump for supposedly historic actions and accomplishments that are in fact nothing of the sort.

Senior adviser Kellyanne Conway wrote an op-ed praising her boss for his "historic" first 100 days in office because he signed 28 pieces of legislation. The problem with that claim is that none of that legislation is in any way significant. Many of them simply repeal regulations implemented under President Barack Obama; two of the bills name VA clinics.

The White House also boasted repeatedly of Trump's supposedly record crowds at his inauguration, even though the audience paled in comparison to Obama's 2009 inauguration.

And now White House press secretary Sean Spicer is applauding his boss for "starting a tradition" of inviting leaders from the faith community to the National Prayer Breakfast. Just one minor correction to that claim: the prayer breakfast tradition started in 1953.

Spicer says Trump is "starting a tradition" with National Prayer Breakfast. It started in 1953. pic.twitter.com/s5bZyTQteD

SPICER: I don't know enough about [the] Obama thing — how far back it went — but you know, each president's going to have their own traditions, and I think this is one that the president — you know, that morning, after you got the Easter egg roll and there's a lot going on, this is his way of starting a tradition here at this White House to bring faith leaders from a variety of backgrounds here to the White House.

While the president claims to have a great relationship with communities of faith, he has yet to name a director to the Office of Faith-based and Neighborhood Partnerships, which has existed since 2001. And while he often bragged on the campaign trail that the Bible is his favorite book — followed closely by his second choice, his own ghostwritten book, The Art of the Deal — he demonstrated an astonishing lack of familiarity with religion.

He said in an interview that he had never asked God for forgiveness because he had never done anything wrong that require forgiveness. Biblical scholars might argue that his infamous adultery would merit an ask of forgiveness. His version of communing with God, he said, was when he went to church, claiming, "When I drink my little wine — which is about the only wine I drink — and have my little cracker, I guess that is a form of asking for forgiveness, and I do that as often as possible because I feel cleansed," he said.

Then there was the humiliating moment when, during an address to the Liberty University, a conservative Christian school, he referred to "two Corinthians" to prove his faith to evangelicals, who were underwhelmed by his biblical literacy.

Trump's less than persuasive assertions of his religion devotion are hard to take seriously, but the absurd idea that he is starting a tradition that is more than half a century old is quite an audacious claim, even for this administration.