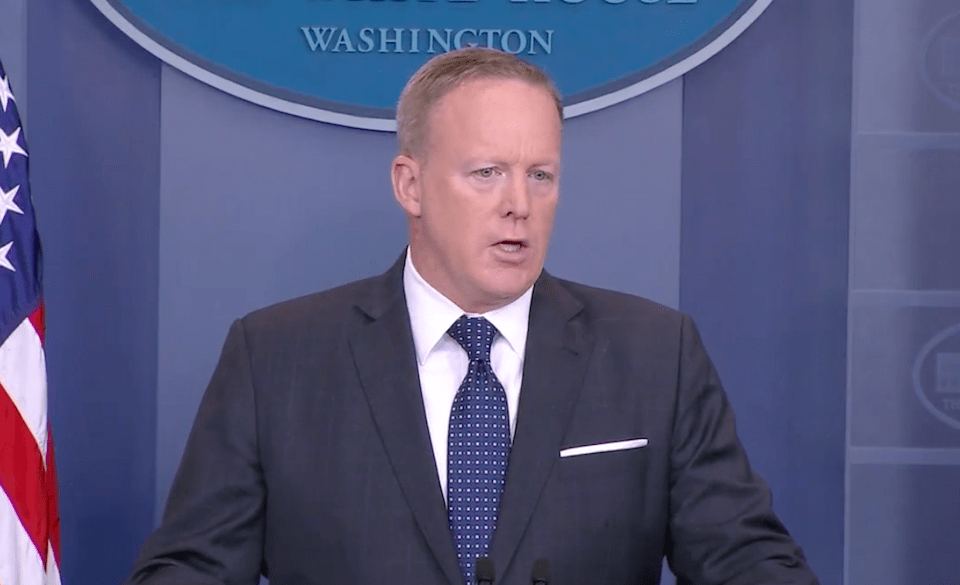 Donald Trump said he was "100 percent" willing to testify under oath. Now the White House is pretending he didn't.

During his daily — or, these days, occasional — press briefing, White House press secretary Sean Spicer tried to spin away a statement Donald Trump made only days ago.

On Friday, Trump was asked during a press conference in the Rose Garden whether he would be willing to testify under oath about conversations he had with FBI Director James Comey before firing him.

Trump answered at the time, "One hundred percent."

But in an exchange with a White House reporter, Spicer tried to claim that is not what Trump said.

SPICER: He was actually specifically asked whether or not he would talk to Director Mueller. And he made it very clear what his position was.

REPORTER: So he was — sorry, just want to be very clear about this. So, he's not saying that he would go before Congress?

Spicer might think he knows exactly what Trump said in the Rose Garden, but he is wrong. As the transcript makes perfectly clear:

Spicer just said Trump was referring to Mueller when he said he'd testify—but that's not what the transcript shows. Mueller was a follow-up. pic.twitter.com/hCp1LFYqmQ

Certainly, Trump's spokespeople — not to mention his attorneys — were less than thrilled to hear Trump agree to testify under oath.

In fact, Democratic Sen. Chris Murphy of Connecticut called on Trump to testify under oath, even before Trump volunteered, after Comey dropped a number of bombshells during his testimony to the Senate last Thursday, including that Trump tried to persuade Comey to drop his investigation.

"If the White House’s account differs from what we heard today," Murphy said in a statement, "the American people deserve to hear the president’s side of the story in a similar forum — under oath and open to the press."

Murphy is right, of course. The American people do deserve to hear Trump's side of the story.

Given his well-established reputation for lying — and even repeating lies that have been debunked — it's no wonder Trump's team is now trying to walk back his offer before he gets himself in even more trouble.