Home National Spicer: Obama only warned Trump about Flynn because Obama is so sensitive
Progressive journalism is under attack. Please help us fight back!
DONATE 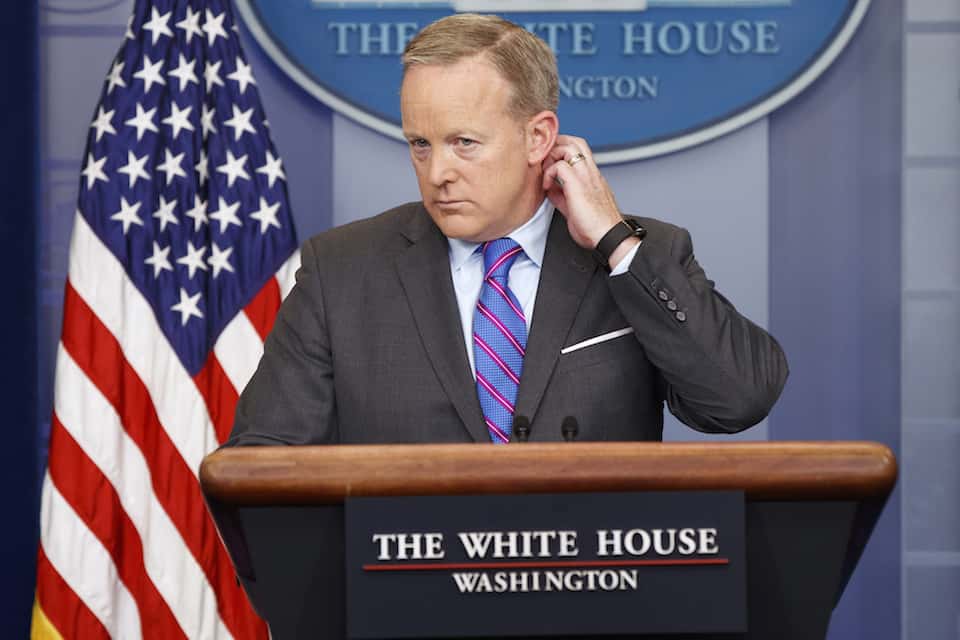 Donald Trump continues to this day to defend his selection of disgraced former general Michael Flynn as national security adviser, while still blaming his predecessor for his extremely poor decision.

On Monday morning, Trump tweeted that Flynn had been vetted by the Obama administration, suggesting that Flynn's access to highly classified information under Trump was somehow President Barack Obama's fault.

This spin, which the White House has been pushing for a while, is absurd on its face. It also fell apart on Monday, thanks to a new report from NBC News that Obama personally warned Trump against hiring Flynn, less than two days after the election.

At his daily White House briefing, press secretary Sean Spicer tried to offer up some fresh new spin to reporter Kristen Welker to try to explain that inconvenient truth.

WELKER: President Obama warned then President-elect Trump against hiring Mike Flynn as his national security adviser. Why did he ignore that warning?

SPICER: I — the president doesn't disclose details of meetings that he had, which in this case was an hour-long meeting, but it's true that President Obama made it known he wasn't exactly a fan of General Flynn's — which is, frankly, shouldn't come as a surprise to anyone, given that General Flynn had worked for President Obama, was an outspoken critic of President Obama's shortcomings — specifically as it related to his lack of strategy confronting ISIS and other threats around — that were facing America.

In other words, yes, Trump was warned about the dangers of hiring Flynn, but Trump had no reason to heed that warning because Obama was probably just being petty and overly sensitive about Flynn's criticism of him.

During the campaign, Flynn was a regular opening act for Trump, firing up the crowds with baseless accusations about Hillary Clinton, and leading them in chants of "Lock her up!" The Trump team even floated the idea of choosing Flynn for vice president before settling on Mike Pence.

Trump ignored Obama's warnings, though, about the man who'd been fired in 2014 from his position as head of the Defense Intelligence Agency for, among other things, mishandling classified information and his infamously bad temperament.

Since Obama's warning to Trump last November, we've learned a great deal about how appropriate that warning was. Acting Attorney General Sally Yates, whom Trump fired, had warned the Trump White House that Flynn was "vulnerable to being compromised by Russia."

Even before Trump was sworn into office, Rep. Elijah Cummings (D-MD) warned Pence, who headed the Trump transition, that Flynn had serious conflicts of interest surrounding his work on behalf of the Turkish government.

While Trump is certainly infamous for his pettiness, Obama is not. The very suggestion that Obama — who withstood constant criticism throughout his presidency, including from Trump — would have warned Trump off of hiring Flynn for purely personal and petty reasons strains credulity, to say the least.

As Yates prepares to testify before the Senate about her knowledge of Flynn and of the Trump team's ties to Russia, one thing is clear: Trump and the White House are becoming increasingly desperate to spin their terrible mistake any way they can. But so far, as with many things, they are failing miserably.