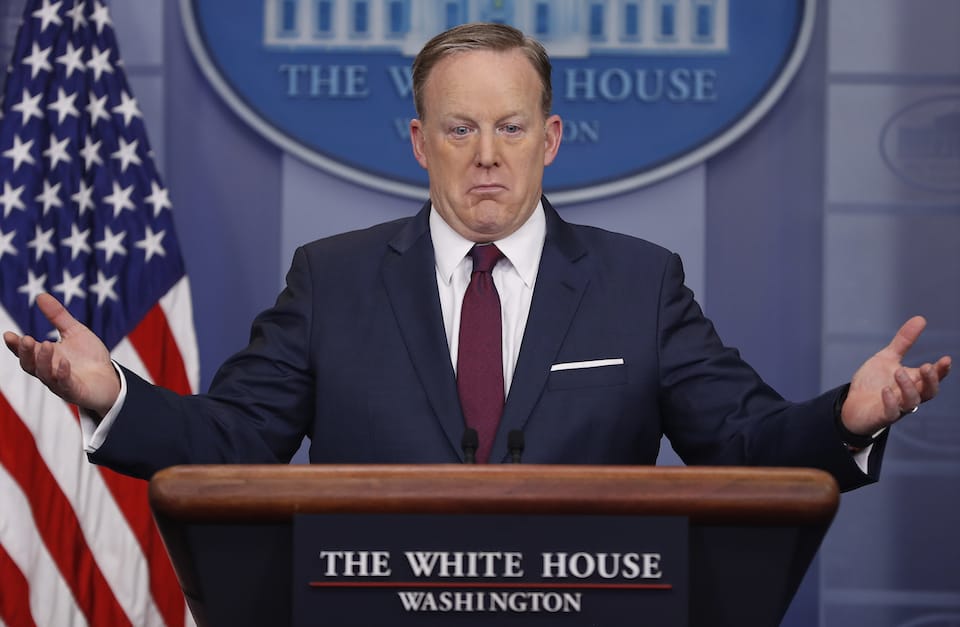 The White House is being suspiciously silent about the massive bombing in Afghanistan — the so-called "Mother of All Bombs" (MOAB). White House Press Secretary Sean Spicer refused to say whether Donald Trump was in the Situation Room for the strike, and the president would not confirm whether he even authorized it.

The United States dropped a GBU-43 bomb, the most powerful non-nuclear bomb in our arsenal, on what has been described as an "ISIS tunnel complex" in Afghanistan. This was the first-ever combat use of the weapon, also known as the “Mother of All Bombs” (MOAB), and yet the White House has been suspiciously tight-lipped about this major military event.

At a White House Daily Briefing, Press Secretary Sean Spicer referred all questions to the Department of Defense, which is normal for operational matters, but he was unwilling to answer questions about Donald Trump's direct involvement in the strike — specifically, whether the president was in the Situation Room for the strike, or even whether he authorized it:

VEGA: Can you give us any background on MOAB in Afghanistan? Was there a Situation Room scenario? Was this several days in the making?

SPICER: In the first question, again, I think General Nicholson, of the United States Air Forces in Afghanistan, is best to address the tick tock on the situation over there.

VEGA: But as far as the president's consultation?

SPICER: I understand. I think that the U.S. Forces Afghanistan as well as the Department of Defense are best to walk through the military operations that are ongoing.

As ABC News' Cecilia Vega pointed out, the White House has demonstrated no qualms about going into details of Trump's involvement when it suits them. In fact, the administration was so eager to boast about sending Trump's son-in-law, Jared Kushner, to Iraq that it violated protocol — and endangered military lives — by confirming the trip before Kushner and the general accompanying him had arrived.

But during the briefing on the strike in Afghanistan, Spicer shut down any and all questions about Trump's whereabouts during this strike.

Spicer then ended the briefing after only about 16 minutes of questions, saying, "We literally have 10 minutes before the president's gonna speak," as bewildered reporters shouted questions about the MOAB strike that Spicer should have been able to answer.

In fact, though, Trump did not begin his photo-op with I-85 first responders until 40 minutes later, and at the conclusion of that event, the White House abruptly cut the feed before reporters' questions could be heard:

When a reporter asked him whether he authorized the bombing in Afghanistan, he would only say, "Everybody knows exactly what happened. What I do is authorize the military."

The reasons for the vagueness about the strike remain to be seen, but Trump's first major military operation turned into an embarrassment when it was revealed that he was absent from the Situation Room, and spent that weekend composing petty tweets as an American serviceman died in that raid in Yemen.

In any case, the White House's refusal to even say whether Trump authorized the strike is, like so much about this administration, highly abnormal and concerning.