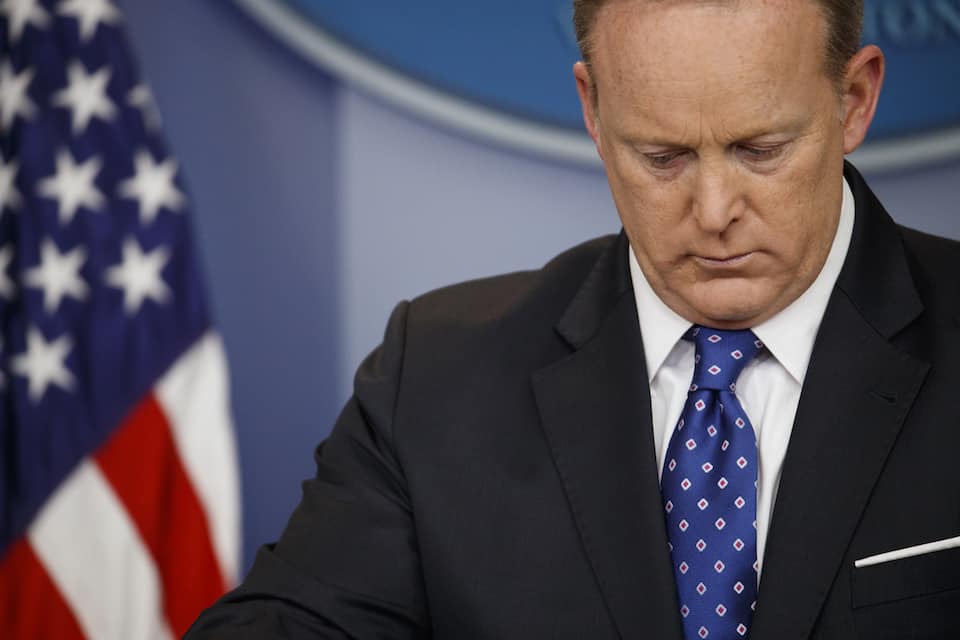 White House press secretary Sean Spicer cited baseless office gossip to attempt deflect from the Trump administration's failure to remove Michael Flynn after they were made aware he posed a national security risk.

Former acting Attorney General Sally Yates testified to a Senate committee that she warned the Trump team on three separate occasions that Flynn's lies about contact with Russian officials meant he was "compromised," and that he could face possible blackmail by Russian elements while he had access to a trove of classified material.

The same day Yates offered the White House a review of the evidence against Flynn, she was fired by Donald Trump for opposing his executive order mandating a ban on Muslim travel.

Reporters peppered Spicer with questions about the 18-day gap between Yates' warning about Flynn and Flynn's eventual firing, which came about only after an embarrassing Washington Post story.

In response, Spicer attempted to cast doubt on how seriously they should have taken Yates' warnings, claiming that she was a "strong supporter" of Hillary Clinton and that he was aware of "widely rumored" gossip that Yates was interested in being part of a possible Clinton White House. Spicer offered no evidence to support his allegations.

Asked why he called Sally Yates a “strong supporter of Hillary Clinton,” Sean Spicer says it was “widely rumored” https://t.co/Amti5GZtln

REPORTER: First you said that Sally Yates was a "strong supporter of Hillary Clinton," what is that based on?

SPICER: I think she's made some, you know, I think she was widely rumored to play a large role in the Justice Department if Hillary Clinton had won.

What’s evidence for Sally Yates supporting Clinton? Spicer says it “was widely rumored” she’d have a job in a Clinton administration DOJ.

Spicer said Sally Yates was a "strong supporter of Clinton."

Did she campaign? Make any public statements? She was a senior DOJ official.

FEC shows no donations from Sally Yates to anyone. Including Hillary Clinton. What is evidence, as Spicer claims, of her supporting Clinton?

Spicer won’t detail why Trump kept Flynn on the job for 11 days between WH seeing Yates evidence & Flynn axing but "we did the right thing."

Yates' background is also at odds with Spicer's rumor-based deflection — she joined the Department of Justice after being hired by Bob Barr, who went on to become a Republican member of Congress and was most notable for advocating for President Bill Clinton's impeachment. While in the U.S. Attorney's Office, Yates served in leadership positions under both Republican (President George W. Bush) and Democratic (President Barack Obama) administrations.

When Yates was nominated for Deputy Attorney General, her confirmation was bipartisan, and she received 84 "yea" votes and only 12 "nay" votes.

Spicer's fact-free defense — along with Trump's post-testimony Twitter tantrum — is evidence that Yates' appearance and factual refutation of several Trump talking points about the Flynn fiasco was effective. Their actions are an admission of fear.