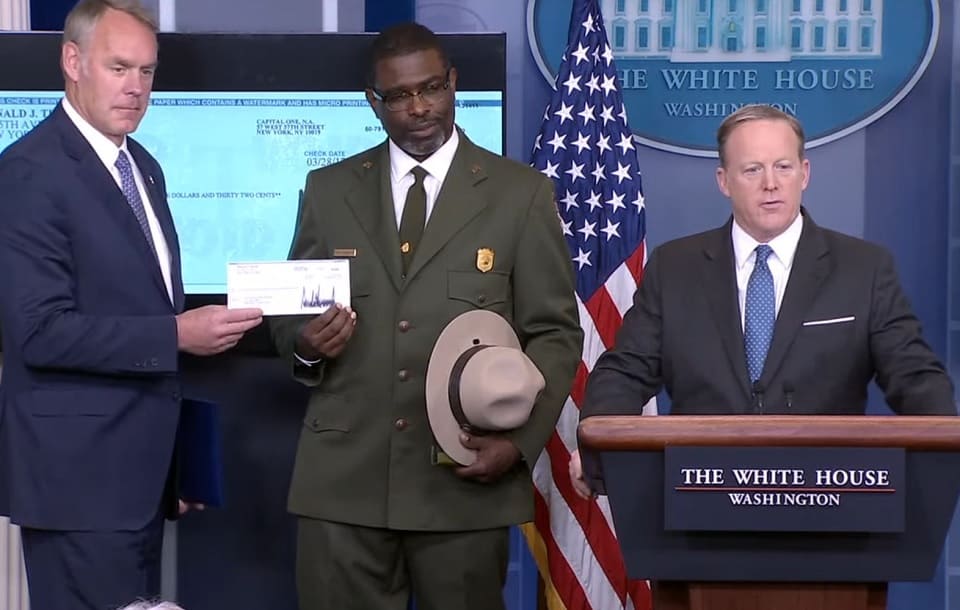 It is hard out there for a Trump, if White House Press Secretary Sean Spicer is to be believed. At his daily briefing, Spicer bristled at the suggestion that Donald Trump should repay local governments for expenses related to his weekend trips to Florida and New York City.

At the White House daily briefing, Press Secretary Sean Spicer's dramatic opening act starred Secretary of the Interior Ryan Zinke accepting a check, from Donald Trump to the National Parks Service, for of $78,333.32 — which represents Trump's government salary for the first quarter of his presidency.

That meager donation from the self-described "billionaire" president raised a very good question from Time's Zeke Miller, who asked if Trump would consider appropriating federal funds to reimburse local governments for the expenses associated with Trump's exceptional travel habits, or pay them out of his own pocket.

In response, Spicer indignantly pointed to all that Trump has sacrificed:

MILLER: The president is going down to Mar-a-Lago again this weekend. He has been facing calls, from both officials in New York and in Florida, either to appropriate federal funds or request federal funds, which are not in the budget for the additional security costs they have faced, given his residences there, his travels to those places. Or to reimburse those local governments out of his own pocket. Obviously, this is a president who is far wealthier than any president we've seen in modern times. He has the capability to make those outlays. Is that something the president is considering, or has he decided to make those outlays to reimburse those governments?

SPICER: I think there's a few things. Number one, the request to go to Mar-a-Lago was something that the Chinese — that was negotiated with the Chinese. And so, I think this is a very high-level visit that really has a huge impact on our both economic and national security. Secondly, the president has an opportunity, as all presidents — President Bush traveled to Crawford, President Obama went to Hawaii often. There is a security aspect that Secret Service determines when the president and the family travels. That's not dictated by the president of the United States. Third, I would note, ironically, this is a day that the president just donated a significant amount of money, of his salary, back to the federal government. So respectfully, it's like — at what point does he do enough? He just gave a very sizable donation.

SPICER: That's now how we judge, though. I think to be able to say — he isn't taking a salary. I think he stepped down from his business. He's walked away from a lot. I think — at some point he's done quite a bit in terms of handing, making a donation to the government.

Trump's minuscule donation, however, barely covers one day of overtime for the Palm Beach Police when Trump is in town. Also inconvenient for Spicer is the fact that, earlier in the briefing, he essentially confirmed a report that Trump can withdraw money from his businesses whenever he wants without disclosing it, a reminder that Trump has not actually walked away from anything.

Trump retains all of the financial interests, and their inherent conflicts, including the lucrative "Alt-White House" in Palm Beach, which has doubled its membership fee under Trump's presidency. Asking Americans to appreciate Trump's great sacrifice — all $78,000 of it — takes a special kind of gall.