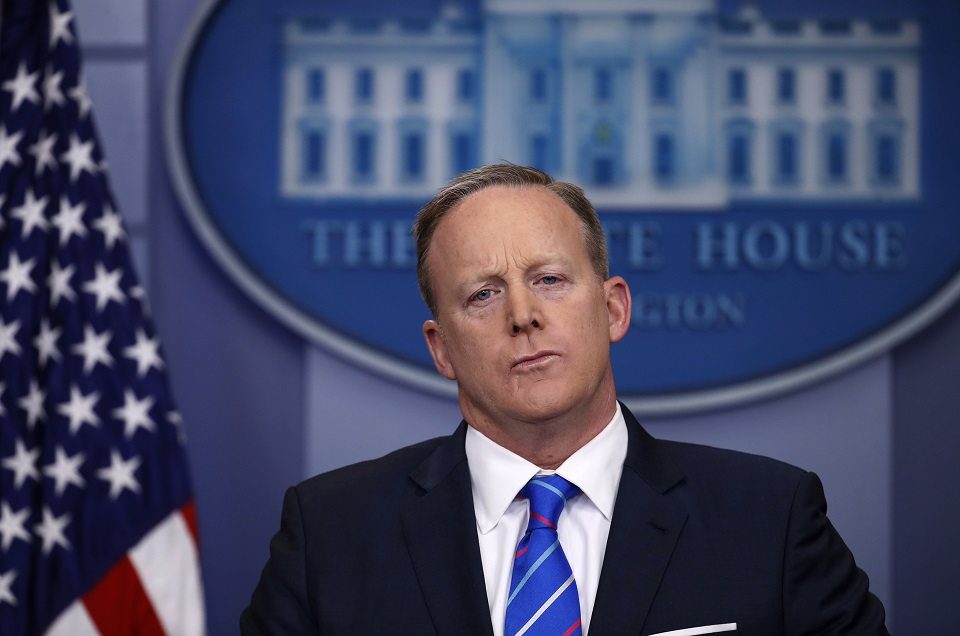 White House Press Secretary Sean Spicer attempted to rebuff calls for an independent investigation into the Trump campaign's contacts with Russia by pointing to the lack of evidence produced so far by White House-controlled entities, thereby proving the need for an independent probe.

The Trump administration's attempts to avoid an independent investigation of contacts between Donald Trump's campaign and Russia has managed to hit a new low.

When ABC News' Jonathan Karl asked White House Press Secretary Sean Spicer if a special prosecutor should be appointed, Spicer responded by citing the consistent drumbeat of deeply-reported stories on those contacts, and the fact that a Republican congressman who was on Trump's own transition team has not seen any evidence.

The fact that the gathering of such evidence would be the point of an investigation apparently did not factor into Spicer's answer:

SPICER: Right, and I guess my question would be "A special prosecutor for what?"

KARL: To look into the Russia connections, the Russian influence in the campaign —

SPICER: Here's my — Jonathan, we have now, for six months, heard story after story come out about unnamed sources say the same thing over and over again. And nothing's come of it. Right? We've heard the same people. The same anecdotes. And we've heard reports over and over again. And as Chairman Nunes made very clear today, he has seen nothing that corroborates that. So, at what point you've got to ask yourself, what are you investigating?

The fact that there is a six-agency task force investigating contacts between Trump associates and the Russians, that Attorney General Jeff Sessions was a member of the Trump campaign, and that key Republican intelligence committee members have colluded with the administration are all reason enough to warrant an independent investigation.

REPORTER: Do you have all of the evidence, at this point, you expect to receive, or would you say you're still in the preliminary stages of receiving and reviewing that evidence?

NUNES: Well, we're working on the — we have the scoping of our investigation finished, and then we're going to move into actually receiving the evidence. But as of right now, the initial inquiries I've made to — of the appropriate agencies, I don't have any evidence.

The White House is citing Nunes' work as the reason an independent investigation is not needed. Yet it appears Nunes has actually looked at precisely no evidence at this point, although he offered the same dismissal as Spicer of the need for a special prosecutor.

House Select Intelligence Committee Ranking Democrat Adam Schiff (D-CA) was also clear with reporters that the committee had received no documents or testimony of any kind:

We have called no witnesses thus far, we have obtained no documents on any counter-intelligence investigation, and we have yet to receive any testimony from the FBI on the investigation of potential links between the Trump campaign and Russia. So we're not in a position to reach any conclusions about that. And I think it very important, having been an assistant U.S. attorney for six years, that when you begin an investigation, you don't begin by stating what you believe to be the conclusion.

Aside from its absurd logic, the Republican talking point parroted by Spicer and Nunes ignores the fact that the most compelling reason for an independent investigation by a special prosecutor is that Congressional Republicans, the Trump administration, and even the leadership of the FBI and the CIA, have demonstrated their inability to conduct such an investigation in an impartial manner.

As Republicans like Darrell Issa join Democrats in demanding an independent investigation, those demands will become more difficult — and politically costly — to resist.