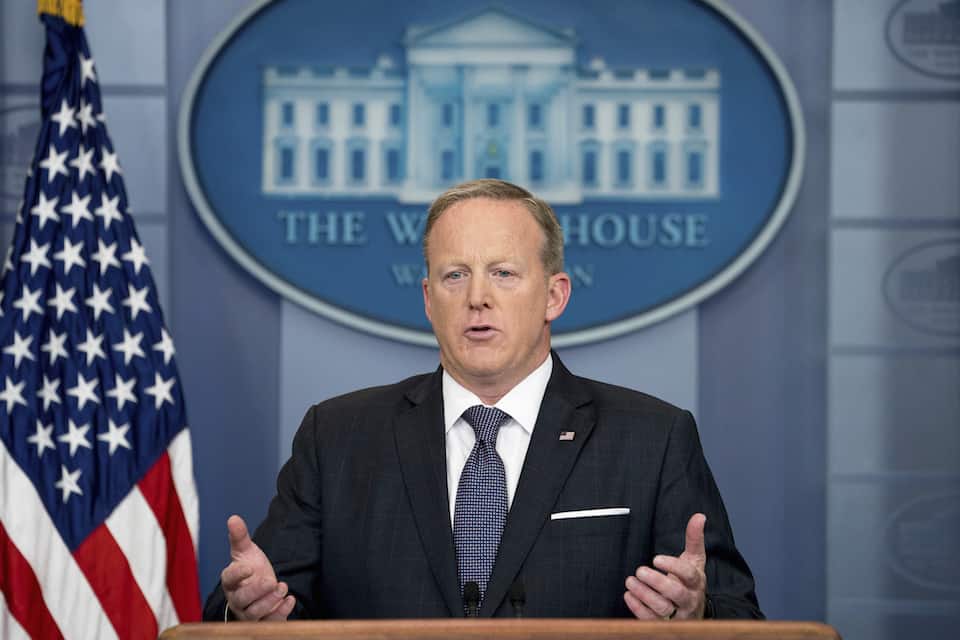 White House press secretary Sean Spicer accused the media of covering up major advances against terrorism under Donald Trump, and characterized this behavior as "fake news." But Trump hasn't made significant strides against terror.

According to Spicer, the media failed, in its coverage of Donald Trump's first presidential trip abroad, to cover "the president's results when it came to fighting terrorism" as a "big thing." Spicer characterized that behavior as "fake news."

Spicer made the comment in response to a question asking what the administration characterizes as "fake news."

Press Sec.: Pres. Trump "frustrated" with "fake news": "There's a perpetuation of false narratives, a use of unnamed sources over and over" pic.twitter.com/DQlagWkKp2

SPICER: I think there is a lot of this stuff that's gotten pushed out based on unnamed, unaccountable sources, that is very troubling. And I think when you see the same kind of thing happen over and over again, it is concerning. And I think the president has fought very hard to bring back jobs. You — as I mentioned, you had over half a trillion dollars of investment that's coming in that's going to grow jobs, grow our economy. That should be a big story. The president's results when it came to fighting terrorism was a big thing. The idea that we're standing up a global center to fight extremism in Saudi Arabia that's uniting Muslim countries. That's a big deal.

REPORTER: You said  that reports that there is going to be an overhaul of the communications are fake news —

SPICER: So now you want to come back to that. What I'm telling you is that the reason that the president is frustrated is because there is a perpetuation of false narratives, a use of unnamed sources over and over again about things that are happening that don't ultimately happen. And I think that is troubling. Thank you, guys, very much, I appreciate it.

There were multiple developments as Trump stumbled through his first trip representing the United States on foreign soil. Significant results in fighting terrorism were not among them.

For example, Trump bowed and curtsied to Saudi Arabia's leaders. His Commerce secretary, meanwhile, praised that nation's prohibition on free expression and the absence of any protests of Trump.

Trump also continued to make excuses for revealing secret intelligence from Israel with top
Russian officials. He had to cancel an appearance at a Twitter forum because he was "exhausted." He praised Greg Gianforte, the Montana Republican who won the state's special House election only a day after assaulting a reporter.

Trump was also laughed at by our allies for misunderstanding how NATO works, and refused to speak to the media for the entire trip.

During the first White House briefing since Trump's return, Spicer also cited the event in which Trump and other leaders posed with a glowing orb to open a counter-terrorism center as another "big thing" that was not sufficiently reported.

so we just gonna pretend this isn’t exactly how space jam started? pic.twitter.com/TS8YUCKYxF

But a major breakthrough in the fight against international terrorism is not something that occurred while Trump was making a mess across the ocean.

After promising during the campaign that he had a secret plan to defeat ISIS immediately upon assuming office, the nation is still waiting for a plan to materialize. He signed an executive order asking for a military solution, but that is still up in the air.

In the same press conference where Spicer added to the growing conspiracy, he indicated that Trump was still reviewing plans on what the path forward is in Afghanistan and the fight against terrorism.

Unlike his predecessor, Trump has yet to achieve significant victories against terrorism, no matter how much his spokesman claims they are being covered up by a hostile media.